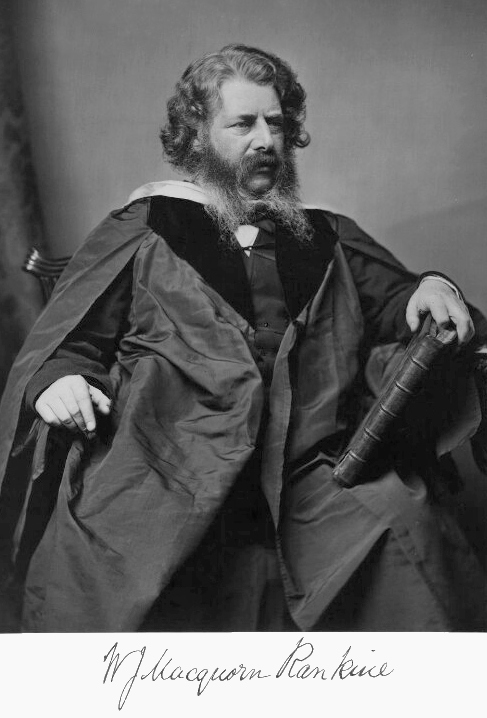 Prof William John Macquorn Rankine (/ˈræŋkɪn/) FRSE FRS LLD (5 July 1820 – 24 December 1872) was a Scottish mechanical engineer who also contributed to civil engineering, physics and mathematics. He was a founding contributor, with Rudolf Clausius and William Thomson (Lord Kelvin), to the science of thermodynamics, particularly focusing on the first of the three thermodynamic laws. He developed the Rankine scale, an equivalent to the Kelvin scale of temperature, but in degrees Fahrenheit rather than centigrade.

Rankine developed a complete theory of the steam engine and indeed of all heat engines. His manuals of engineering science and practice were used for many decades after their publication in the 1850s and 1860s. He published several hundred papers and notes on science and engineering topics, from 1840 onwards, and his interests were extremely varied, including, in his youth, botany, music theory and number theory, and, in his mature years, most major branches of science, mathematics and engineering.

He was an enthusiastic amateur singer, pianist and cellist who composed his own humorous songs. – Wikipedia

The First Vatican Council adopted the dogmatic constitution Pastor Aeternus 150 years ago today. It is known for the definition of papal infallibility. The Church, the Bride of Christ, with all its members, the faithful, is infallible. Pastor Aeternus clarified some … END_OF_DOCUMENT_TOKEN_TO_BE_REPLACED
Jul
20
Mon
all-day New Moon (10:33 MST).
New Moon (10:33 MST).
Jul 20 all-day

By the modern definition, New Moon occurs when the Moon and Sun are at the same geocentric ecliptic longitude. The part of the Moon facing us is completely in shadow then. Pictured here is the traditional New Moon, the earliest visible … END_OF_DOCUMENT_TOKEN_TO_BE_REPLACED
all-day Saturn at Opposition (15:00 MST).
Saturn at Opposition (15:00 MST).
Jul 20 all-day
Jul
22
Wed
all-day Mercury at Greatest Elongation.
Mercury at Greatest Elongation.
Jul 22 all-day
View Calendar
Add