Sir John Ambrose Fleming FRS died in 1945, aged 95 (born 29 November 1849). “He was an English electrical engineer and physicist who invented the first thermionic valve or vacuum tube, designed the radio transmitter with which the first transatlantic radio transmission was made, and also established the right-hand rule used in physics. He was the eldest of seven children of James Fleming DD (died 1879), a Congregational minister, and his wife Mary Ann, at Lancaster, Lancashire, and baptised on 11 February 1850. A devout Christian, he once preached at St Martin-in-the-Fields in London on evidence for the resurrection. In 1932, he and Douglas Dewar and Bernard Acworth helped establish the Evolution Protest Movement. Fleming bequeathed much of his estate to Christian charities, especially those for the poor. He was a noted photographer, painted watercolors, and enjoyed climbing the Alps.” – Wikipedia

In Fleming’s obituary, W H Eccles FRS, wrote, “As the years passed he [Fleming] became very deaf, but he continued his lecture work and still charmed great audiences and stimulated students. It is thought he could utilize his deafness as a defense when he wished to ignore advice; at any rate his hearing varied whimsically. This deafness seems to have been a family trouble, for his sister, who now and then visited him at the [University] College [London], was also deaf. Their conversation penetrated to other parts of the department and involuntary auditors would occasionally hear the lady telling her brother not to be so cantankerous.”

On 25 May 1768, the Admiralty commissioned Cook to command a scientific voyage to the Pacific Ocean. The purpose of the voyage was to observe and record the 1769 transit of Venus across the Sun which, when combined with observations from other places, would help to determine the distance of the Earth from the Sun.

“The expedition sailed aboard HMS Endeavour, departing England on 26 August 1768. Cook and his crew rounded Cape Horn and continued westward across the Pacific, arriving at Tahiti on 13 April 1769, where the observations of the Venus Transit were made. However, the result of the observations was not as conclusive or accurate as had been hoped. Once the observations were completed, Cook opened the sealed 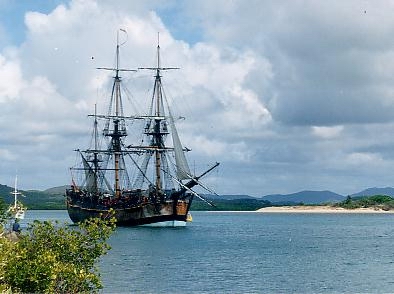 Endeavour replica in Cooktown, Queensland harbour – anchored where the original Endeavour was beached for seven weeks in 1770. Photograph by John Hill, Wikimedia.

orders, which were additional instructions from the Admiralty for the second part of his voyage: to search the south Pacific for signs of the postulated rich southern continent of Terra Australis. Cook then sailed to New Zealand, taking with him Tupaia, an exceptionally accomplished Tahitian aristocrat and priest, who helped guide him through the Polynesian islands, and mapped the complete coastline, making only some minor errors. He then voyaged west, reaching the southeastern coast of Australia on 19 April 1770, and in doing so his expedition became the first recorded Europeans to have encountered its eastern coastline. – Wikipedia