Images from the Japanese satellite Akatsuki show a spectacular arc-shaped cloud feature on Venus reminiscent of a giant (6000-mile long) sideways smiley face. Interestingly, this "smiley emoji" feature was stable for a full four days, so what was it? 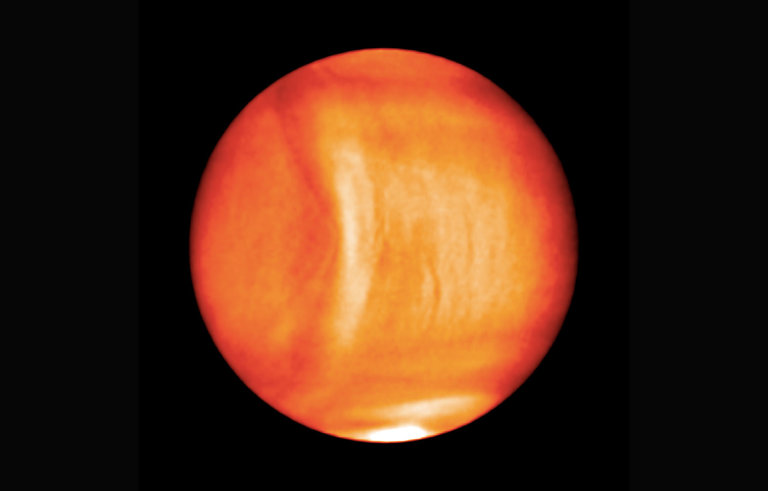 Let us start by reviewing what we know about Venus’ atmosphere. The inner atmosphere extends for about 12 miles above the surface and is extremely thick. If you were to try to walk through it, assuming you had a sturdy astronaut suit capable of sustaining acid rain, then you would face an atmospheric density equivalent to about one-sixth that of water. On the surface the winds would be fair, clocking in at 2-3 miles per hour. The winds would then rise up to a hurricane levels of about 200 miles per hour or even faster at higher altitudes. The winds move so fast that they typically circumnavigate the planet once every 4 days (compared to the more sluggish rotation period of Venus of 243 days). All this sets the stage for some very interesting meteorology on Venus.

It turns out that the smiley face feature that was seen informs us of significant geological features on the Venetian surface which disturb the atmospheric patterns above it. The effect that caused the gigantic smiley face is called a “gravity wave.” Note this not to be mistaken for a “gravitational wave” which is a fundamental ringing of the fabric of spacetime.

The gravity wave is more mundane effect that takes place when the surface winds hit in this case the massive Venetian mountain range Aphrodite Terra just below the “emoji” feature. As a result the winds are driven straight upward until they strike the speedy horizontally-driven winds. The combination creates a relatively stable feature that is the gravity wave.

This discovery, written up in this week’s Science section of the New York Times, helps us to see indirectly the features on the surface of our “twin” planet.