With NASA's Eyes on the Solar System, you can learn about the Earth, the solar system and beyond! You can fly alongside current spacecraft, take guided tours of historic space missions, travel to the planets, their moons, comets and asteroids. You can visualize and animate Earth climate data, and take virtual tours of exoplanets that have been discovered orbiting other stars! NASA's Eyes is FREE for Windows and MAC, and is great for use in the classroom or at home!

I use Eyes every week to create images for my "In the Sky" posts; in this post, I'll cover the Eyes on the Solar System module of the Eyes app.

When you launch the Eyes client app, you are presented with a splash screen showing the three Eyes modules; Eyes on the Solar System (middle) has two buttons: simple and advanced mode. Simple mode presents you with a very minimal user interface, and enters into a Kiosk-mode after a few moments if you do not select anything; I've had Eyes running in this mode on several library PCs at my wife's school during an "Astronomy Night" event.

Advanced mode allows you to manually travel wherever you wish, select from multiple display options, set your date from 1950 to 2050, accelerate time to see the motions of planets and satellites, and more - I use advanced mode frequently.

When you launch into Eyes' advanced mode, you are shown a top-down view of the inner solar system as it appears at your current date and time:

You can change your viewpoint by clicking+dragging the mouse, double-clicking on an object, or using the mouse wheel - scroll and zoom functions work the same way as in many video games. Using the menu system you can select from several different display options and destinations including: orbit and spacecraft view lines, date and time, planets and dwarf planets, major and minor moons, asteroids, comets, spacecraft and more. The following animation shows an oblique view of the the inner solar system with various options as they are turned on:

When I give live demonstrations of Eyes, the first thing I do is zoom to the Earth, showing all the orbiting satellites, and then select the International Space Station and zoom to it. I get really close to the station, rotating around it to show-off the detail of the model, and I then accelerate time and show the station orbiting the Earth. Most of the spacecraft in Eyes are modeled in full 3D; some older spacecraft are shown as 2D photos. Eyes has a "View in 3D" setting that changes the display to red-cyan anaglyph 3D - crack out your 3D glasses!

Most of Eyes' control functions are described on the help screen; I discovered that if you hold the CTRL key down while clicking+dragging, you will slowly rotate around your target object - great for when you are making videos!

Showing the orbits of the moons of Jupiter in Eyes is always fun! Starting near Jupiter, I display the orbits of the four Galilean moons - all in a nice flat plane around Jupiter. I then turn on "minor moons" and the screen becomes filled with orbit lines! This always gets gasps from audiences. You need to zoom way out from Jupiter to see the orbits of its farthest moons - some of which take over 2 years to orbit Jupiter!

The moons of Jupiter. Credit: NASA Eyes on the Solar System / Bob Trembley.

On September 27, 2019, the NASA Juno mission posted the following tweet showing an image of the shadow of Jupiter's moon Io on the clouds of Jupiter:

Moon shadow: during most my recent close flyby of Jupiter, I captured this extraordinary view of a shadow cast by the planet’s volcanic moon Io. See details https://t.co/NsUohRsMJl pic.twitter.com/tWG8XpICJr

I wondered how close the Juno spacecraft had to be above Io's shadow when it took that photo, so I changed the date in Eyes to when Juno was at perijove - Io's shadow was accurately represented, and Juno is shown to be pretty close!

Many objects have info cards with interesting facts about that object, many with links to NASA's Solar System Exploration website with more images and information.

You can visualize several typically invisible features of Jupiter including aurora, magnetosphere, radiation field and rings.

Eyes has several different guided tours of historic space missions: Voyager, Cassini at Saturn, Juno at Jupiter, Dawn at Ceres, Mars Curiosity descent and more! I've been using Eyes for years - after following the Cassini and Dawn missions for so long, it was heartbreaking to see them both moved to the list of historic missions.

In mid-August of 2015, the Cassini spacecraft flew-by Saturn's Moon Dione; at the time, I wanted to post some screen shots of what that might look like

Note how well Dione is modeled in Eyes (above) compared to this actual flyby image: 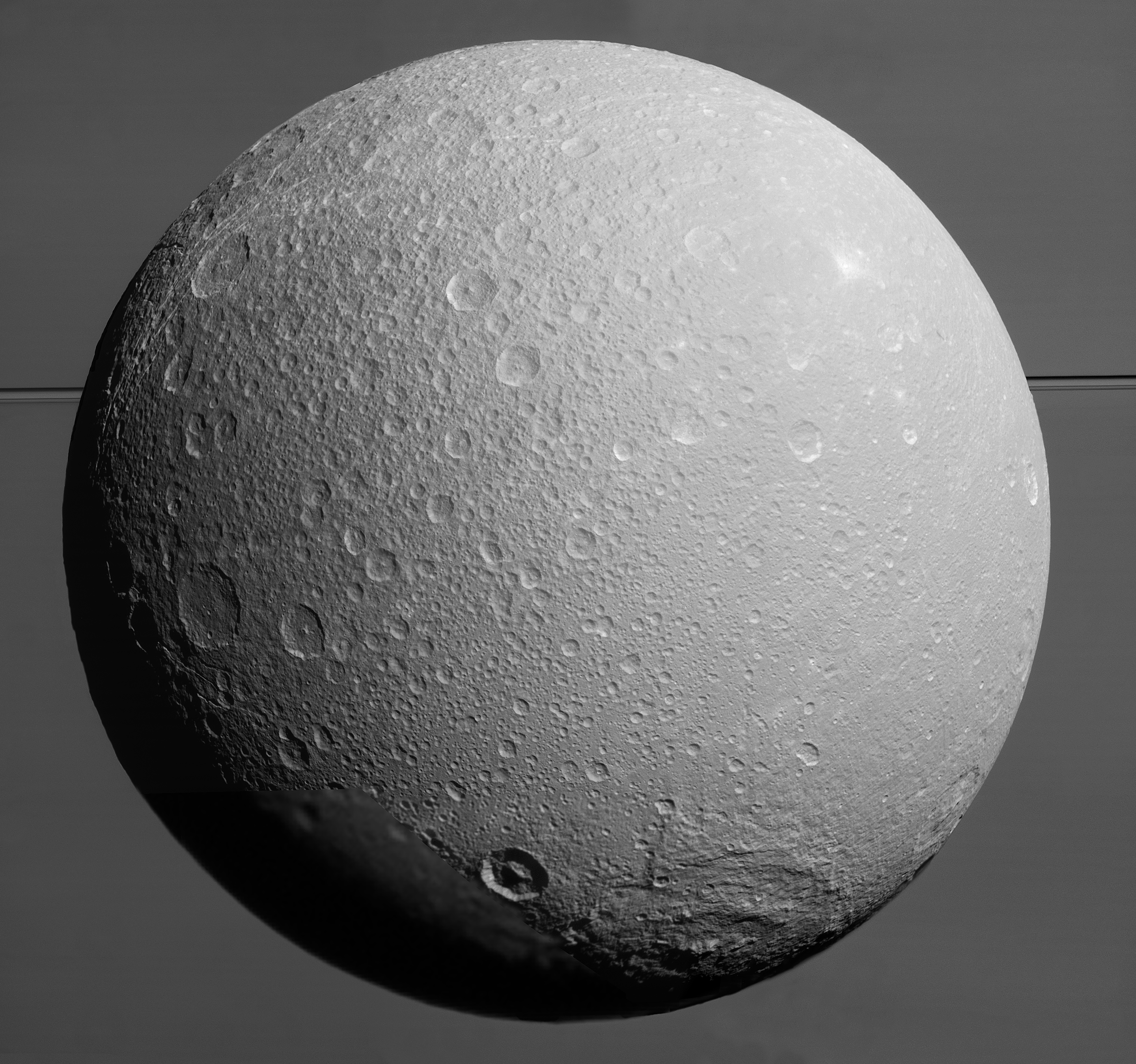 This view from NASA's Cassini spacecraft looks toward Saturn's icy moon Dione, with giant Saturn and its rings in the background, just prior to the mission's final close approach to the moon on August 17, 2015. Credits: NASA/JPL-Caltech/Space Science Institute

The Cassini mission discovered that Saturn's moon Enceladus has plumes of water vapor and ice particles erupting from its south pole - with Eyes, you can travel to Enceladus and see an animation of those plumes. Some of the material from Enceladus' plumes escapes from the moon to form Saturn’s tenuous E ring.

Enceladus' south pole plumes - Saturn appears in the distance with shadows from its rings on its cloud tops. Credit: NASA Eyes on the Solar System / Bob Trembley.

In the Cassini tour, you can display the interior of Enceladus, showing its sub-surface ocean and hydrothermal activity that is the source of its plumes:

Interior of Enceladus from the Cassini Tour in NASA Eyes. Credit: NASA Eyes on the Solar System / Bob Trembley

One of the coolest things I've done with Eyes is watch a "live simulation" of the New Horizon's Pluto flyby as it was happening. I got to see what the spacecraft was observing in real-time - it was simply fantastic! During the Pluto flyby, I had NASA TV running on a second monitor - several times I saw images from NASA's Eyes being used during the broadcast.

NASA's Eyes is FREE for Windows and Mac from: https://eyes.nasa.gov. Eyes runs OK on lower-end PCs, but it runs better on a "game-ready" PC - something with a higher-end graphics adapter.

NASA Eyes needs an internet connection - it downloads data when you zoom-in to objects; this has been an issue for me when I've tried to give live demos of Eyes in locations with poor internet service - I've had to turn on the internet hotspot on my smartphone, connect my laptop, and then launch Eyes and access the things I plan on showing so they got cached. There is a method by which you can download an "offline version" of Eyes, but it is meant for museums and educational institutes, requires about a terabyte of drive space, and you must coordinate with the Eyes developers - and there are frequent updates. If you are interested in this option you can contact the developers by using the “Feedback” email address on the Eyes homepage.

NASA's Solar System Exploration Website is a great online resource for information about bodies in the solar system - it is linked to by many info panels within the Eyes app. From the website's menu system, you can choose which solar system body you'd like to explore, and see related articles and images; if you do nothing, the site will go into kiosk-mode and display animated images of various solar system objects.

From the website's menu system, you can access an online orrery which shows the solar system as it appears now, and you can zoom-to various solar system objects - just like with the Eyes app. The orrery acts like a web-based version of Eyes, but it can run on PCs and smartphones without having to install an app.

The current version of the online orrery does not allow you to set the date and time, or accelerate time and only has a subset of the objects available in the Eyes app. NASA is developing a new webGL engine which future versions of the orrery will use - it will have more options, and you will be able fast-forward time; I'm told by developers it will be amazing!

UPDATE: Easter egg!! To fast-forward and rewind in the Orrery, click the date six times.

Because development is moving to the web, the Windows/Mac client version of Eyes will only be updated with new missions. When the new version is released I'll be sure to post an update!

@NASANewHorizons has a rendezvous with #UltimaThule and you can follow along live in the latest Eyes module! Go to https://t.co/ftbOL2JnAf and click on "Launch" and then hit the Preview button to see the flyby. pic.twitter.com/dp0xCKQuE3