My wife has recuperated from her appendectomy - for the most part - she's still in the recliner by evening, taking it easy. Her middle-school opening got delayed for a week, but she had to go into school this morning to do set up. She's not having any students today - they start tomorrow, and knowing the history of Connie catching everything sick students bring into school... well... if I sit and think about it, I'm quite likely terrified at a situation that seems dangerous and completely out of my control. I'm not sure if playing complicated and immersive video games is "handling the situation very well," but it sure keeps my mind off it...

Saturn and Jupiter appear in the southern sky after sunset near the constellation Sagittarius, and are visible for several hours into the early morning.

Saturn and Jupiter appear in the southern sky at 10:00 pm this week. Credit: Stellarium / Bob Trembley.

Mars and the Moon appear high in the east-southeastern sky at 3:00 AM on Sept. 9th. Credit: Stellarium / Bob Trembley.

Venus and the constellation Orion appear in the east-southeastern predawn sky on Sept. 9nd.

Venus and and the constellation Orion appear in the eastern predawn sky on Sept. 9th. Credit: Stellarium / Bob Trembley.

The Moon appears in the Eastern predawn sky with Venus from Sept. 11-14th, appearing VERY near Venus on Sept. 13th.

The third quarter Moon occurs on Sept. 10th, rising around midnight, and visible to the south after sunrise.

After Sept. 10th, the Moon will be a waning crescent, visible low to the east before sunrise.

A researcher recently found a form of iron oxide, or rust, on the Moon. Rust forms when iron is exposed to oxygen and water. The Moon isn't supposed to have liquid water, so how can it be rusting?https://t.co/n12wT9gIwQ pic.twitter.com/FEMf3ZRxdp

To get to the Moon, you need a lot of power. 🔥The boosters for @NASA's SLS rocket are the largest, most powerful ever built for flight.

Check out the drone footage from Wednesday's Flight Support Booster (FSB-1) test, then learn more about the test >> https://t.co/r767bMcaVb pic.twitter.com/uCZxNGw8c5

The Sun has been spot-free for 18 days; the northern coronal hole remains monstrous, the coronal hole at the south pole as a couple tendrils reaching towards the equator.

More long-lasting large prominences over the last several days have made for great astrophoto targets!

SOLARACTIVITY PICTURE OF THE DAY for Monday, September 7th, 2020 goes out to Paul Andrew for this amazing prominence capture.
Paul commented: "A nice prominence captured on 6th September from Kent, UK, with my Lunt LS152, ZWO ASI290MM camera, and a Tele Vue 2.5x Powermate." 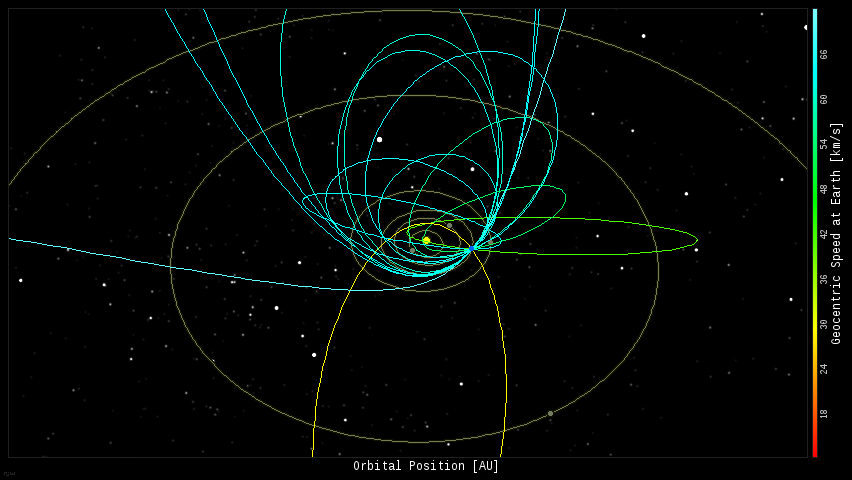 Fireball over the south of Spain on Sep. 3 - https://t.co/Pv1Z5yfQxM This beautiful meteor overflew the south of Spain on 2020 September 3 at about 2:35 local time (equivalent to 0:35 UT). It was generated by a sporadic meteoroid following an asteroid-like orbit that hit th... pic.twitter.com/IaxQ9lDaah

Position of the planets and a couple spacecraft in the inner solar system, 2020-09-08. Credit: NASA Eyes on the Solar System / Bob Trembley.

Position of the planets in the middle solar system, 2020-09-08 - the orbit of asteroid Vesta is highlighted. Credit: NASA Eyes on the Solar System / Bob Trembley.

Position of the planets, some dwarf planets and some transneptunian objects in the outer solar system - the orbit of comet Siding Spring is highlighted:

Position of the planets and some transneptunian objects in the outer solar system, 2020-09-08 - the orbit of comet Siding Spring is highlighted. Credit: NASA Eyes on the Solar System / Bob Trembley.

The full orbit of comet Siding Spring; you can just see the orbit of Sedna stretching towards the logo. Credit: NASA Eyes on the Solar System / Bob Trembley.

#OTD in 2016, a ULA #AtlasV launched @OSIRISREx into a hyperbolic trajectory away from Earth on its journey to return an asteroid sample. The spacecraft is scheduled to contact the surface of Bennu on Oct. 20, 2020. #ExplorationEnabled

Studying tiny particles suspended in a liquid on the station may improve everyday household products and even future Mars missions. https://t.co/9tFcInazbH

The en-route Mars rover @NASAPersevere has an identical twin that will stay here on Earth, named Optimism.

Which I'm sure is a great name, but in my opinion they really missed out not naming it "Robot @CaptMarkKelly."https://t.co/AETm4KrwPu

The human impacts on the environment are profound and pervasive. NASA scientists are exploring how COVID-19 stay-at-home measures affect the environment (air, crops, fire, pollution, traffic) and how the environment influences the spread of the virus. https://t.co/FvBQyjElHF

Davagh Forest Park has been designated as an IDSPark, making it the 1st ever IDSP in Northern Ireland. This area is culturally significant as the site of the Beaghmore Stone Circles, a complex of early Bronze Age megalithic features, stone circles & cairnshttps://t.co/xwenVDp3gy

Point of view is everything.

Galaxy NGC 2188 is a barred spiral, but only its very narrow outer edge is visible to us on Earth.

It's #ReadABookDay! 📚 Hubble’s digital library is full of free, downloadable e-books about our mission and discoveries.

Continuing with my visual tour of nearby stars and their systems, we travel to the Gliese 687 system, about 15 light years distant.

Gliese 687 is about 15 light years from Sol; the plane (green) is aligned with the orientation of the plane of the Milky Way galaxy. Credit: SpaceEngine / Bob Trembley.

Gliese 687, or GJ 687 (Gliese–Jahreiß 687) is a red dwarf in the constellation Draco. This is one of the closest stars to the Sun and lies at an approximate distance of less than 15 light years. Even though it is close by, it has a magnitude of about 9, so it can only be seen through a moderately sized telescope. Gliese 687 has a high proper motion, advancing 1.304 arcseconds per year across the sky. It has a net relative velocity of about 39 km/s. It is known to have a Neptune-mass planet. Old books and articles refer to it as Argelander Oeltzen 17415.

Gliese 687 has about 40% of the Sun's mass and nearly 50% of the Sun's radius. Compared to the Sun, it has a slightly higher proportion of elements with higher atomic numbers than helium. It appears to have a rotation of 60 days and to be somewhat chromospherically active.

It displays no excess of infrared radiation that would indicate orbiting dust.

In 2014, it was discovered to have a planet, Gliese 687 b, with a minimum mass of 18.394 Earth masses (which makes it comparable to Neptune), an orbital period of 38.14 days, a low orbital eccentricity and inside the habitable zone. Another Neptune mass planet candidate was discovered in 2020, in a further out and much colder orbit. - Wikipedia

Artist's Renderings of Exoplanet Gliese 687 b