The Astronomy at the Beach event has come and gone, and although we did not have the amount of attendees we've had at in-person events, we did have some sessions with a lot of viewers. The speakers were fantastic, and many of the sessions were recorded, so you can access the event website and watch replays! I spent the last several months helping the board of the Great Lakes Association of Astronomy Clubs (GLAAC) with their website for the event, and was monitoring several events simultaneously as they were happening during the event. Now that the event is over, I'm thinking about how GLAAC can help promote Michigan's astronomy clubs, and their presenters who have expressed an interest in doing remote presentations for in-school and at-home classrooms.

Venus appears low in the eastern predawn sky all week near the star Regulus in Leo - look for the inverted question mark asterism. At the same time over in the northeastern sky, the handle of the Big Dipper asterism is pointing down towards the horizon.

Venus appears very near the star Regulus on the mornings of October 3rd and 4th.

Saturn and Jupiter appear in the southern sky after sunset the Moon appears in the southeastern sky on Sept. 29th. Credit: Stellarium / Bob Trembley.

Mars appears in the southeastern sky after midnight this week; the Moon moves eastward each evening, getting closer to Mars.

Mars and the Moon appear high in the southeastern sky around midnight this week. Credit: Stellarium / Bob Trembley.

The Moon appears in a very close conjunction with Mars in the southeastern sky at midnight on Oct. 3rd. Credit: Stellarium / Bob Trembley.

The Moon appears in a very close conjunction with Mars at midnight on Oct. 3rd. Credit: Stellarium / Bob Trembley.

The full Moon occurs on Oct. 1st - rising at sunset, visible high in the sky around midnight, and visible all night.

After Oct. 1st, the Moon will be a waning gibbous - rising after sunset, visible high in the sky after midnight, and visible to the southwest after sunrise.

We want to see your lunar artwork! Share your creations and see others' on the official International #ObserveTheMoon Night gallery! https://t.co/ZvOiLdA0ea

The Sun has been spotless for 3 days; the northern coronal hole continues to be huge - with a thick tendril stretching southward - very near a region with a LOT of coronal loop activity!

Lots of prominence activity over the last several days!

The SOLARACTIVITY PICTURE OF THE DAY for September 29th, 2020 goes out to Otto Gruebl for this Calcium image.
Comments by Otto: "Sun in CaK of 27.9.2020 from Taurikura, Northland with decaying AR 2773 and two small prominences Lunt 60 refractor w.Lunt CaK module B1200, ZWO ASI 174 MM,Ioptron AZ Pro Autostakkert,Photoshop CC 2018"

Data from NASA missions — like our Solar Dynamics Observatory and the retired RHESSI satellite — is helping scientists study potential connections between solar flares and “sunquakes,” seismic waves on the Sun. More from @UCBerkeley: https://t.co/UMczVuuChr pic.twitter.com/nzmfoQdEjd 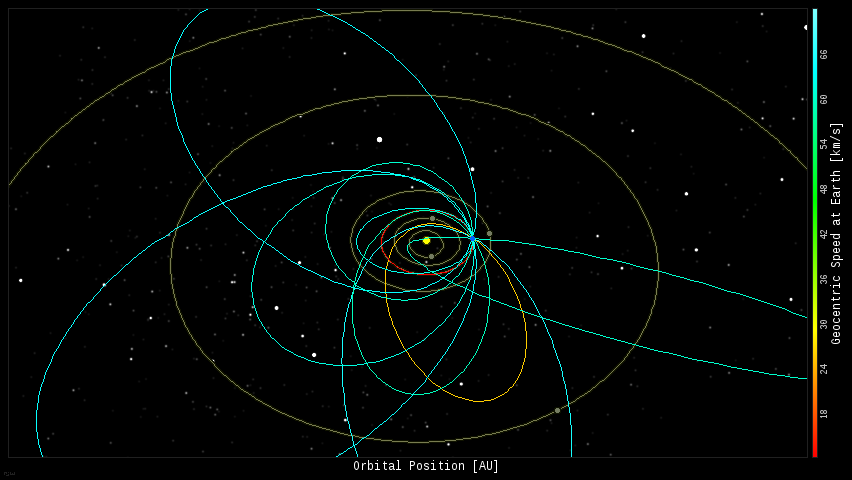 Some preliminary results on the earthgrazing #fireball of yesterday morning, from Dutch all-sky #meteor camera images.
Rare case of a meteor that definitely went in and out of the atmosphere again! Just like the famous 1972 Grand Tetons fireball@MVerstraaten @cgbassa @Doenker pic.twitter.com/cYIPXb1oOE

Position of the planets and a couple spacecraft in the inner solar system, 2020-09-29. Credit: NASA Eyes on the Solar System / Bob Trembley.

Position of the planets in the middle solar system, 2020-09-29. Credit: NASA Eyes on the Solar System / Bob Trembley.

Position of the planets and some transneptunian objects in the outer solar system, 2020-09-29. Credit: NASA Eyes on the Solar System / Bob Trembley.

At the very end of the TAGSAM arm is the sample collector head - it's sort of like my hand, and it'll be the only part of me that touches Bennu's surface while gathering a sample.

Weather has pushed the launch of a U.S. cargo mission to Thursday and the Exp 63 crew is back to work after a weekend of leak tests. More... https://t.co/pNtJnqM9hU pic.twitter.com/vjbNSr5swu

NEWS: We’re now targeting 2:40am ET Saturday, Oct. 31, for the launch of the @NASA and @SpaceX Crew-1 mission to send astronauts to the @Space_Station. Here is the latest #LaunchAmerica update: https://t.co/UXtCHLq247 pic.twitter.com/szkUUQMVv1

The world's latest sea level-monitoring satellite has arrived at Vandenberg Air Force Base in California to be prepared for its Nov. 10 launch. Once in orbit, the mission will collect highly accurate measurements for more than 90% of the ocean. https://t.co/0JtXSTzJTW

Did you know we offer free printable wildlife workbooks for children 5+ to help teach them about light pollution?

Check out all of our resources for educators here: https://t.co/tz4LUlezDk pic.twitter.com/gjFcMRocLC

#HubbleFriday Everything you see in this Hubble image makes up only a tiny fraction of this galaxy’s bulk.

NGC 5585 has far more dark matter than similarly sized galaxies. Dark matter can’t be directly observed, and what it is remains a mystery: https://t.co/Y2lIgfmpmm pic.twitter.com/l88dXgAnuG