Astronomy at the Beach - This Weekend!

The Great Lakes Association of Astronomy Clubs hosts the annual Astronomy at the Beach event every September - this year it will be held online the 25th & 26th! The lineup of speakers and presentations for the event is simply amazing; four of the presenters just happen to write for the Sacred Space Astronomy site! If you are interested at all in astronomy, these are must-see presentations - and many will take questions from the viewing audience!

Having meetings with Michigan astronomers and working on the website for the Astronomy at the Beach event has been a great way to get to know the astronomers of GLAAC member clubs I've only had a little contact with in the past. I was thinking this morning how incredibly fortunate I am to be in the company of so many astronomers - both amateur and professional. I only wish I would have known about Michigan's community of astronomers several decades ago.

Saturn and Jupiter appear in the southern sky after sunset, and the Moon appears near the star Antares after sunset on Sept. 22nd.

Saturn and Jupiter appear in the southern sky after sunset and set in the early morning hours; the Moon appears in the southwestern sky on Sept. 22nd, and moves towards the pair of planets for several days. Credit: Stellarium / Bob Trembley.

The Moon moves southward and appears near Jupiter and Saturn after sunset on Sept 27th and 28th.

The Moon appears near Jupiter in the southern sky after sunset on Sept. 24th. Credit: Stellarium / Bob Trembley.

Venus appears low in the eastern predawn sky all week, each morning a bit lower towards the horizon; the constellation Orion appears higher and to the south.

The Moon is a waxing crescent - visible to the southwest in the early evening.

After Sept. 24th, the Moon will be a waxing gibbous - visible to the southeast in early evening, and up for most of the night.

International Observe the Moon Night this year conveniently falls on the weekend of the Astronomy at the Beach event!

The Sun has been spot-free for 32 days; the northern coronal hole has remains monstrous and has grown tendrils, the coronal hole at the south pole appears to have diminished from last week. Something exciting this way comes! A region with a LOT of coronal loop activity is rotating into view.

Prominence activity everywhere over the last several days; the region rotating into view with coronal loops above is throwing prominences all over the place!

The SOLARACTIVITY PICTURE OF THE DAY for Tuesday, September 22nd, 2020 goes out to Jean-paul Desgrees for this great prominence image.
Jean-paul commented: "SUN on the 21.09.2020th - TS130mm glasses on MESU MK2, Quark H alpha filter, UVIRcut, ASI178M. No tasks but a beautiful protuberance."

Sun News - We're officially in the next solar cycle

Our Sun has entered a new cycle. A panel co-sponsored by @NOAA & @NASA has announced that the Sun’s low point in activity happened in December 2019, marking the start of a new solar cycle. https://t.co/VC44pSdDJO 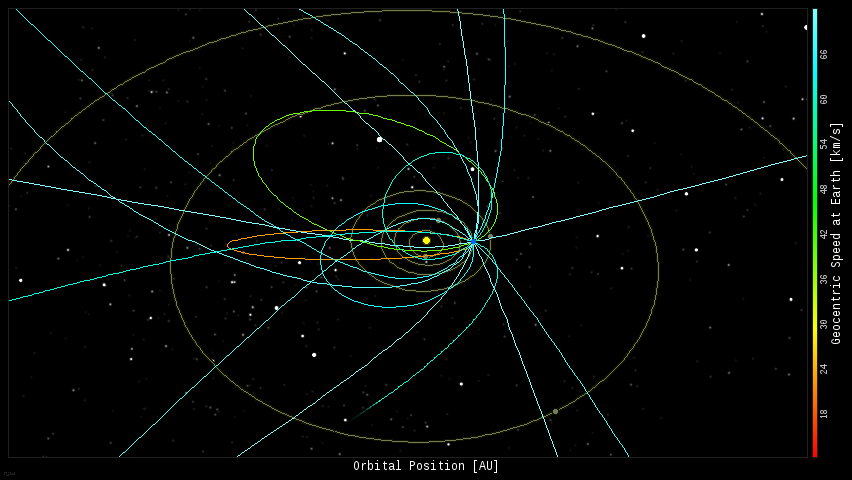 Position of the planets and a couple spacecraft in the inner solar system, 2020-09-22. Credit: NASA Eyes on the Solar System / Bob Trembley.

Position of the planets in the middle solar system, 2020-09-22. Credit: NASA Eyes on the Solar System / Bob Trembley.

Position of the planets and some transneptunian objects in the outer solar system, 2020-09-22. Credit: NASA Eyes on the Solar System / Bob Trembley.

Well, Bennu's surprised us yet again!

It appears some pieces of asteroid Vesta - the target of @NASA_Dawn 's mission - ended up on asteroid Bennu. This new discovery sheds light on Bennu's history and formation 💥

On Sept. 29, we are launching @ISS_Research & products to the @Space_Station:

Fall migration is underway! Did you know light pollution doesn’t just erase our view of the night sky, it has a devastating impact on migrating birds?

This year, we've teamed up with @audubonsociety to bring awareness to the issue.

#HubbleClassic Fly through tangled filaments of glowing gases in the Veil Nebula, the remnant of a star that exploded thousands of years ago.

This scientific visualization is based on Hubble observations of the nebula & was released 5 years ago this week: https://t.co/RLJchhHQfW pic.twitter.com/5KrQuP4edE

Frame from a 3-D visualization of a fly-through across a small portion of the Veil Nebula as photographed by the Hubble Space Telescope. This region is a small part of a huge expanding remnant from a star that exploded many thousands of years ago. Hubble resolves tangled rope-like filaments of glowing gases. The 3-D model has been created for illustrative purposes and shows that that the giant bubble of gas has a thin, rippled surface. It also highlights that the emission from different chemical elements arises from different layers of gas within the nebula. In the imagery, emission from hydrogen, sulfur, and oxygen are shown in red, green, and blue, respectively.
CREDITS: NASA, ESA, and F. Summers, G. Bacon, Z. Levay, and L. Frattare (Viz 3D Team, STScI);
Acknowledgment: NASA, ESA, and the Hubble Heritage Team (STScI/AURA)