I've been working with the Great Lakes Association of Astronomy Clubs (GLAAC) on their annual Astronomy at the Beach event - Sept. 25 & 26; we're holding the event online this year for obvious reasons. We have a fantastic set of speakers for the event, and several astronomers will be live-broadcasting from their observatories and driveways across Michigan and from Arizona!

Our headliners are Br. Guy & Dan Davis - co-authors of Turn Left at Orion, David Levy - comet discoverer extraordinaire and author on the Sacred Space Astronomy site, and Dolores Hill of NASA's OSIRIS-REx Asteroid Sample Return Mission. Several astronomers from GLAAC-member clubs will be giving presentations and participating in panel discussions about astronomy and space science; I will be giving three presentations myself and monitoring the event's "Ops Channel" over the weekend. Several of the persons giving presentations are volunteer NASA/JPL Solar System Ambassadors - like my wife and I. Many of the presenters have expressed a willingness to do presentations remotely for in-school and at-home schools!

The multi-month conjunction of Saturn and Jupiter appears in the southern sky after sunset near the constellation Sagittarius - the pair of planets set in the wee hours of the morning.

Saturn and Jupiter appear in the southern sky at midnight this week. Credit: Stellarium / Bob Trembley.

I was alerted during the last night's meeting of the Warren Astronomical Society that there would be some shadow-transits on Jupiter during the Astronomy at the Beach event - as I was writing this post I got to wondering if there would be any this week, and BOY are there ever!

Mars appears in the eastern sky around midnight this week; I heard at last night's meeting of the Warren Astronomical Society that you may be able to see the planet Uranus from dark sky site with your naked eye!

Venus appears in the eastern predawn sky all week, each morning a bit lower towards the horizon; the stars Procyon and Sirius form a temporary asterism with Venus across the east-southeastern sky. I'm told that many of the "UFO calls" the Michigan Science Center gets is because of Venus... well it IS bright!

A waxing crescent Moon appears in the southwestern sky at dusk from Sept. 19-23rd - be sure to look for earthshine!

The smoke from the western wildfires was a topic of discussion during last night's meeting of the Warren Astronomical Society.

The Moon is a waning crescent, visible low to the east before sunrise.

The new Moon occurs on Sept. 17th - no annoying moonlight to add to your obscured view because of clouds from the western state's forest fires.

After Sept. 17th, the Moon will be a waxing crescent, visible to the southwest in the early evening.

Interested in designing spacesuit user interfaces to assist astronauts with lunar exploration? Join the #NASASUITS info-session on 9/16 at 5pm ET! 🚀🌕

International Observe the Moon Night this year conveniently falls on the weekend of the Astronomy at the Beach event!

The Sun has not had a spot in 25 days; the northern coronal hole has gone from monstrous to yawning, the coronal hole at the south pole also remain s open and fairly large.

Lots of prominence activity over the last several days; lots of filament activity too - keep your eye on the face of the Sun in the lower left of the animation below.

The Sun's activity has a major impact on astronauts & the spacecraft they travel in — so understanding the solar cycle is key as we explore further beyond Earth. https://t.co/PfNMSADs9V

Are you interested in Near-Earth Asteroid research at the @SAAO and @UCT_news?

I am excited to share my MSc research in a poster for #RASPoster2020. See a sneak peek below or the full poster at https://t.co/1NMKv2GxxE. pic.twitter.com/kjJ9tjmBAI 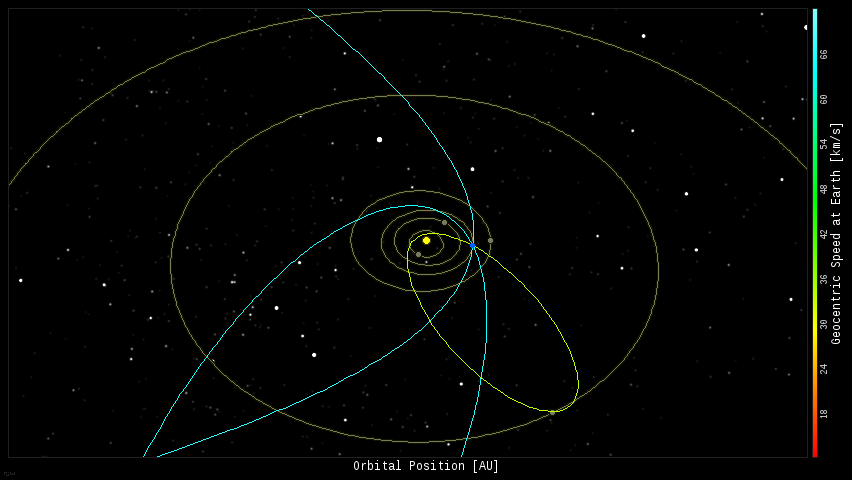 Position of the planets and a couple spacecraft in the inner solar system, 2020-09-15. Credit: NASA Eyes on the Solar System / Bob Trembley.

Position of the planets in the middle solar system, 2020-09-15 - the orbit of comet 67P is highlighted. Credit: NASA Eyes on the Solar System / Bob Trembley.

Position of the planets and some transneptunian objects in the outer solar system, 2020-09-15 - the orbit of TNO 2007 OR10 is highlighted. Credit: NASA Eyes on the Solar System / Bob Trembley.

Orbit of transneptunian object 2007 OR10 seen from a different angle.

Alternate view of the orbit of TNO 2007 OR10, with the plane of the ecliptic tilted nearly edge-on. Credit: NASA Eyes on the Solar System / Bob Trembley.

Bennu: an asteroid that throws marble-sized rocks, has building-sized boulders, and didn't give us many options for a sample collection site.

So, if collecting a sample from Bennu is so challenging, why are we doing it? pic.twitter.com/SeI87yXpCA

Meet Diana Trujillo, an engineer helping search for signs of ancient life on Mars with her work on @NASAPersevere.

"Located about a hour-and-a-half from Denver in western Morgan County, Jackson Lake is the 19th state park in the country to receive the designation but the only state park in Colorado."

#HubbleClassic Normal spiral galaxies appear flat when viewed from the side. But the disk of this unusual edge-on galaxy, called ESO 510-G13, is warped. The distortion is likely caused by the gravitational pull of another galaxy: https://t.co/n4Aq23VEdN pic.twitter.com/eXubxaHRnX

#HubbleFriday Colorful stars pack together in this Hubble image of globular cluster NGC 1805.

This tight grouping of thousands of stars is located near the edge of the Large Magellanic Cloud, a satellite galaxy of our own Milky Way: https://t.co/0DVn92ZWna pic.twitter.com/0Kgp8DOpWG

And in the BIG NEWS department!

Life on Venus? The discovery of phosphine, a byproduct of anaerobic biology, is the most significant development yet in building the case for life off Earth. About 10 years ago NASA discovered microbial life at 120,000ft in Earth’s upper atmosphere. It’s time to prioritize Venus. https://t.co/hm8TOEQ9es