World Space Week runs from Oct. 4-10 - this year's theme is "Satellites Improve Life." World Space Week is an international celebration of science and technology, and their contribution to the betterment of the human condition. The United Nations General Assembly declared in 1999 that World Space Week will be held each year from October 4-10. These dates commemorate two events:

Venus appears in the eastern predawn sky, having moved towards the eastern horizon, far from its close conjunction with Regulus last week; the Moon forms a temporary asterism with the stars Pollux and Procyon on the morning of Oct. 11th

Venus appears in the eastern predawn sky; the Moon forms a temporary asterism with the stars Pollux and Procyon on the morning of Oct. 11th. Credit: Stellarium / Bob Trembley.

The Moon appears near the star Regulus in the constellation Leo, and forms a temporary asterism with Venus in the predawn sky on Oct. 13th; Venus appeared near Regulus for a couple days last week.

The Moon appears near Regulus, and forms a temporary asterism with Venus in the predawn sky on Oct. 13th. Credit: Stellarium / Bob Trembley.

Saturn and Jupiter appear in the southern sky after sunset - simply great targets for observing!

Saturn and Jupiter appear in the southern sky after sunset all week. Credit: Stellarium / Bob Trembley.

Mars appears high in the southwestern predawn sky this week; the Moon appears in the southern sky on Oct. 7th, and moves eastward with each morning.

The third quarter Moon occurs on Sat. Oct. 10th - rising around midnight, and visible to the south after sunrise.

After Oct. 10th, the Moon will be a waning crescent - visible low to the east before sunrise.

Interesting shadows on this annotated close-up of 2 sections of the Moon on Oct. 12th. Visualizations by Ernie Wright / NASA's Scientific Visualization Studio.

As we propel forward to the 🌜 Moon, 🔴 Mars, & beyond the 🌌 stars, we'll need advanced 3D printing construction systems to help us build livable & workable spaces off-world. @NASA_Technology is teaming up with a commercial partner to do just that: https://t.co/fLvtAqEIXw pic.twitter.com/fKTPV0Ac7r

The Sun has been spotless for 10 days now; coronal holes continue to remain open at both poles - one rotating out of view, the other forming in the southern hemisphere. The region with a lot of coronal loop activity from last week remains active, and is rotating out of view.

WOW! Lots of prominence activity over the last several days! You may have to watch the video below several times before you see them all!

The SOLARACTIVITY PICTURE OF THE DAY for Tuesday, October 6th, 2020 goes out to Mike Wenz for this fantastic prominence.
Mike commented: "Prominence activity on Oct. 3. Image taken with a 152mm refractor, Daystar Quark H-alpha filter and a QHY5III290M camera."

This #SunDay, read about the newly-released data from @ESASolarOrbiter, including measurements of high-energy particles, magnetic fields, and plasma waves in the inner solar system. 💥🧲🌊 https://t.co/RZmS75swEz pic.twitter.com/bazRNDSHvm

These are the orbits of the Near-Earth astroids that we discovered in just the past two weeks! Earth's neighborhood can be pretty crowded.
Plot made with CSS Orbit View (https://t.co/ZJlnCndKvm)
None of these objects pose an impact risk with Earth.@AsteroidWatch @UArizonaLPL pic.twitter.com/uSfva6Mkp0 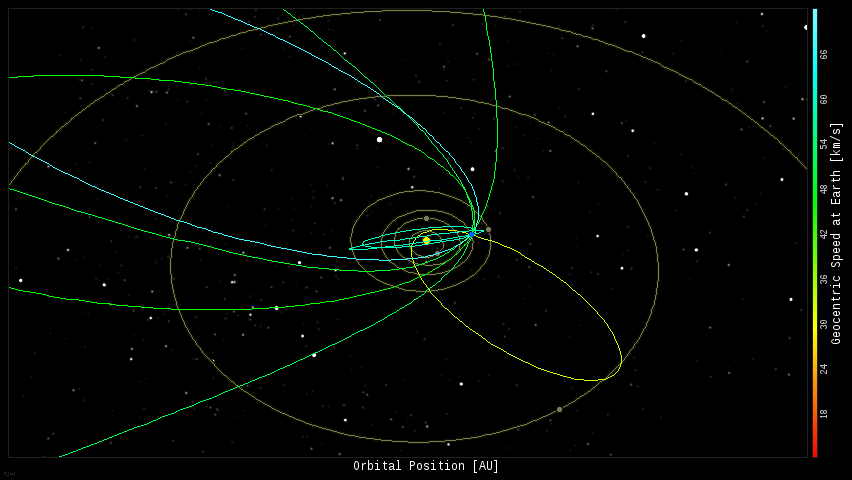 Position of the planets and a couple spacecraft in the inner solar system, 2020-10-06. Credit: NASA Eyes on the Solar System / Bob Trembley.

Position of the planets in the middle solar system - the orbit of comet 67P/Churyumov-Gerasimenko is highlighted.

Position of the planets in the middle solar system, 2020-10-06. Credit: NASA Eyes on the Solar System / Bob Trembley.

Position of the planets and some transneptunian objects in the outer solar system, 2020-10-06. Credit: NASA Eyes on the Solar System / Bob Trembley.

The orbit of TNO Arrokoth seen from an oblique angle:

Side -view of the planets and some transneptunian objects in the outer solar system, 2020-10-06. Credit: NASA Eyes on the Solar System / Bob Trembley.

The "reverse vacuum" TAGSAM on @OSIRISREx was invented by our engineer who used a plastic cup, air compressor, and gravel driveway to conduct the first test. The system will be used to collect a sample from asteroid Bennu. #ToBennuAndBack

This is SO COOL!

Have you ever seen a rocket launch -- from space? If you search for a dot in this video, you'll find out it's a rocket, the Russian Progress MS-10 bringing supplies to the International Space Station in November 2018 [read more: https://t.co/4aWECA9iud] pic.twitter.com/SotRDyZYtJ

Climate: I have a grandchild; I want to Earth to be a safe and healthy place for her to live in.

What causes sea level to rise? 🌊

Here are five things to know about this historic U.S.-European effort: https://t.co/QwKzo2uQOT pic.twitter.com/QDi0LneqVL

Great to hear that the Elan Valley is applying to be an IDA Dark Sky Place. Had fab time stargazing there in 2011. http://t.co/vnZVId595s

Certified by IDA as a Dark Sky Community... pic.twitter.com/EOFyQwoDIt

#HubbleClassic Billowing clouds of super-hot gas form "wings" around a massive, young star in this star-forming region named Sharpless 2-106. A ring of dust and gas orbiting the star acts like a belt, cinching the expanding nebula into an hourglass shape: https://t.co/dXj1VesZdA pic.twitter.com/KDQs8UjMJI

LP 145-141 (also LAWD 37) is a white dwarf located 15 light years from the Solar System. According to a 2009 paper, it is the fourth closest known white dwarf to the Sun (after Sirius B, Procyon B, and van Maanen's star.)

LP 145-141 is known at least from 1917, when its proper motion was published by R. T. A. Innes and H. E. Wood in Volume 37 of Circular of the Union Observatory. The corresponding designation is UO 37. (Note: this designation is not unique for this star, that is all other stars, listed in the table in the Volume 37 of this Circular, also could be called by this name)

LP 145-141 may be a member of the Wolf 219 moving group, which has seven possible members. These stars share a similar motion through space, which may indicate a common origin. This group has an estimated space velocity of 160 km/s and is following a highly eccentric orbit through the Milky Way galaxy.

White dwarfs are no longer generating energy at their cores through nuclear fusion, and instead are steadily radiating away their remaining heat. LP 145-141 has a DQ spectral classification, indicating that it is a rare type of white dwarf which displays evidence of atomic or molecular carbon in its spectrum.

LP 145-141 has only 75% of the Sun's mass, but it is the remnant of a massive main-sequence star that had an estimated 4.4 solar masses. While it was on the main sequence, it probably was a spectral class B star (in the range B4-B9). Most of the star's original mass was shed after it passed into the asymptotic giant branch stage, just prior to becoming a white dwarf.

A survey with the Hubble Space Telescope revealed no visible orbiting companions, at least down to the limit of detection.

Its proximity, mass and temperature have led to it being considered a good candidate to look for Jupiter-like planets. Its relatively large mass and high temperature mean that the system is relatively short-lived and hence of more recent origin. - Wikipedia