The Moon appears near both Jupiter and Saturn this week in the southwestern sky at dusk. Saturn and Jupiter are excellent observing targets; Jupiter is getting lower towards the horizon each evening, and will be lost in the glare of the Sun in early December. Note: This region of the sky will have a conjunction of the Moon, Jupiter, Saturn and Venus in late November - stay tuned!

The Moon passes close to Saturn and Jupiter in the southwestern sky after sunset from Oct. 29 - Nov. 2. Credit: Stellarium / Bob Trembley

The planet Mars low on the eastern horizon before dawn this week. Credit: Stellarium / Bob Trembley

The Moon joins Venus and Mercury low on the southwestern sky at dusk on Oct. 29th - Mercury may be challenging to see. See if you can catch a glimpse of earthshine on the Moon for the next couple evenings.

The constellation Ursa Major and the "Big Dipper" asterism in the north-northwestern sky a few hours after sunset this week. Credit: Stellarium / Bob Trembley

We get a LOT of clouds here in Michigan, and thunderstorms are not unusual; I saw this article on SpaceWeather.com when I was writing this post - "Gigantic Jets" are pretty rare, and very hard to see from the ground.

Close Encounter with a Gigantic Jet https://t.co/gDig6lnnM8 via @wordpressdotcom

Messier 106 (also known as NGC 4258) is an intermediate spiral galaxy in the constellation Canes Venatici. It was discovered by Pierre Méchain in 1781. M106 is at a distance of about 22 to 25 million light-years away from Earth. M106 contains an active nucleus classified as a Type 2 Seyfert, and the presence of a central supermassive black hole has been demonstrated from radio-wavelength observations of the rotation of a disk of molecular gas orbiting within the inner light-year around the black hole. NGC 4217 is a possible companion galaxy of Messier 106. A Type II supernova was observed in M106 in May 2014.

Here is where M 106 is located in the constellation Canes Venatici - very near Ursa Major:

The first-quarter Moon occurs on Nov. 4th, it will be visible high in the southern sky in early evening.

Good news: NASA's cancelled Resource Prospector has been reborn as VIPER, a rover that will roll across the Moon's south pole & drill for frozen water in 2022. https://t.co/zIM7KUWJv9 pic.twitter.com/G2WbrnvI1b

The sun has been spotless for 26 days; the south pole coronal hole has reopened, and coronal holes now appear at both poles. There is a disconnected set of coronal holes below the equator. 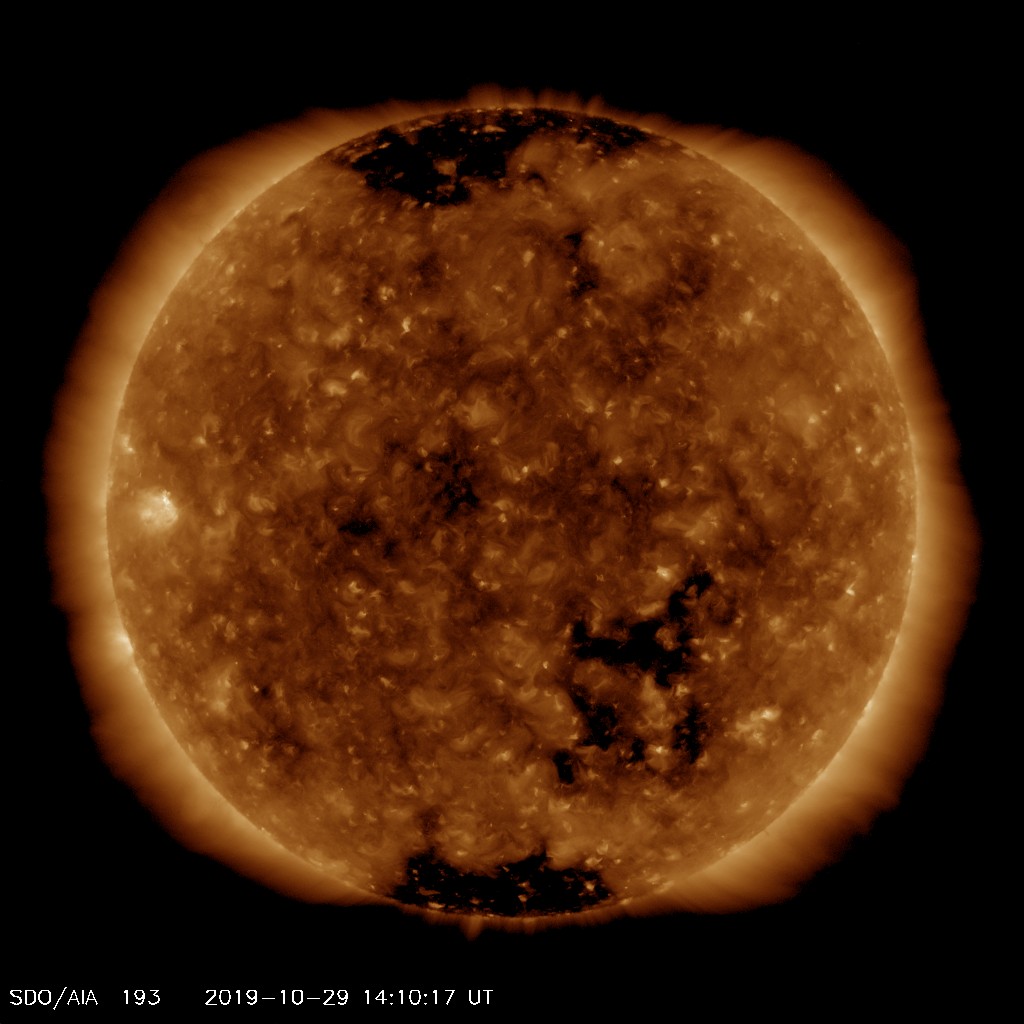 More impressive prominences on the Sun's limb over the last couple days; there is a bright area rotating into view - possible a new active region.

It's #SunDay! ☀️ Even our star celebrates the spooky season — in 2014, active regions on the Sun created this jack-o'-lantern face, as seen in ultraviolet light by our Solar Dynamics Observatory satellite. 🎃🛰 Download in high resolution: https://t.co/GVWPlfb1h2 #Halloween pic.twitter.com/3QlSFHWIYO

ESO: Asteroid Hygiea Could Be the Smallest Dwarf Planet Yet in the Solar System https://t.co/ffIuEiZQZ1

I wasn't sure where Hygiea was in the asteroid belt, so I found it in SpaceEngine:

Had comet C/2019 Q4 entered our Solar System a few years later, it could have been a potential candidate for ESA’s ‘Comet Interceptor’ mission (although the primary target is a comet in the Oort cloud)
Find out more here: https://t.co/EJjPy9vULT pic.twitter.com/jav3IVv0pv

Position of the planets and some spacecraft in the inner solar system, Oct. 29 2019. Credit: NASA Eyes on the Solar System / Bob Trembley.

Position of the planets in the middle solar system, Oct. 29 2019. Credit: NASA Eyes on the Solar System / Bob Trembley.

Position of the planets in the outer solar system, Oct. 29 2019. Credit: NASA Eyes on the Solar System / Bob Trembley.

229762 Gǃkúnǁʼhòmdímà, provisional designation 2007 UK126, is a trans-Neptunian object and binary system from the extended scattered disc, located in the outermost region of the Solar System. It was discovered on 19 October 2007 by American astronomers Megan Schwamb, Michael Brown, and David Rabinowitz at the Palomar Observatory in California and measures approximately 600 kilometers (400 miles) in diameter, and is representative of mid-sized objects under approximately 1000 km that do not appear to have collapsed into fully solid bodies. Its 100-kilometer moon was discovered by Keith Noll, Will Grundy, and colleagues with the Hubble Space Telescope in 2008.

The name Gǃkúnǁʼhòmdímà is from the Juǀʼhoansi (ǃKung) people of Namibia. Gǃkúnǁʼhòmdímà is the Beautiful Aardvark Girl of Juǀʼhoan mythology, who sometimes appears in the stories of other San peoples as a python girl or elephant girl; she defends her people and punishes wrongdoers using gǁámígǁàmì spines,[15] a rain-cloud full of hail, and her magical oryx horn. The name "Gǃkúnǁʼhòmdímà" derives from gǃkún 'aardvark', ǁʼhòm mà 'young woman' and the feminine suffix dí. The moon Gǃòʼé ǃHú is named after her horn: it means simply 'oryx' (gǃòʼé) 'horn' (ǃhú).

Another 3D view, this time of site Osprey. Check out how steep those crater walls look.

This view illustrates just how rocky the terrain is that surrounds the crater where the site is located.

The anaglyph is oriented south up.

Mars continues to surprise us. While digging this weekend the mole backed about halfway out of the ground. Preliminary assessment points to unexpected soil properties as the main reason. Team looking at next steps. #SaveTheMole #Teamwork pic.twitter.com/UURvU8VTwZ

At 15, NASA's Aura mission is still making important contributions to studying Earth’s ozone layer, air quality and climate. We look at some of the ways it has benefitted both science and society. https://t.co/Fj4Lr4eqTe

I went to Wikipedia's List of exoplanets in the conservative habitable zone, and my eye was drawn to and entry with a star very similar to our Sun.

Kepler-452b (a planet sometimes quoted to be an Earth 2.0 or Earth's Cousin based on its characteristics; known sometimes as Coruscant by NASA, also known by its Kepler Object of Interest designation KOI-7016.01) is an exoplanet orbiting the Sun-like star Kepler-452 about 1,402 light-years (430 pc) from Earth in the constellation Cygnus. It was identified by the Kepler space telescope, and its discovery was announced by NASA on 23 July 2015. However, a study in 2018 by Mullally et al. implied that statistically, Kepler-452b has not been proven to exist and must still be considered a candidate. It is the first potentially rocky super-Earth planet discovered orbiting within the habitable zone of a star very similar to the Sun.

The planet is about 1,400 light-years away from the Solar System.

Searching for ET with TESS

This @NASA_Hubble image of galaxy cluster SDSS J1038+4849 seems to be all smiles: http://t.co/J0CuA8Mmkd pic.twitter.com/pxqAdA6B7R

I mentioned in my previous post that an update was released for KSP; I started a new career-mode game, and I now have 4 space stations orbiting the planet, and 2 around the Mun.