Saturn and Jupiter continue to be excellent observing targets in the southern sky after sunset; this last weekend. The Warren Astronomical Society hosted a boatload of girl and boy scouts at their Stargate Observatory this last weekend - I was with the girl scouts before dusk showing them a virtual reality fly-over of Saturn, another member was talking to the girls about meteorites.

Saturn and Jupiter in the southwestern sky after sunset on Oct. 22, 2019 - the teapot asterism in the constellation Sagittarius is highlighted. Credit: Stellarium / Bob Trembley

The Moon passes through the constellations Cancer and Leo in the mornings of Oct. 22-24th.

The Moon passing through the constellations Cancer and Leo from Oct. 22-24, 2019. Credit: Stellarium / Bob Trembley

A very VERY thin waning crescent Moon appears near to Mars above the eastern horizon before dawn on Oct. 26th.

Venus and Mercury appear very close to each other in the southwestern sky at dusk on Oct. 22nd - if you use binoculars, and get Venus in your right field-of-view, Mercury will be in your left. Observing this may be a challenge if you have anything obscuring your view of the horizon.

Venus and Mercury appear very near each other before sunset on Oct. 22nd. Credit: Stellarium / Bob Trembley

The constellations Cygnus and Lyra are directly overhead after sunset this week.

Cygnus (the swan) is occasionally referred to as the "northern cross," and Lyra (the lyre) is host to M57 - the Ring Nebula, this weeks observing target.

The Ring Nebula (also catalogued as Messier 57, M57 or NGC 6720) is a planetary nebula in the northern constellation of Lyra. Such objects are formed when a shell of ionized gas is expelled into the surrounding interstellar medium by a star at in the last stages of its evolution before becoming a white dwarf.

M57 is an example of the class of planetary nebulae known as bipolar nebulae, whose thick equatorial rings visibly extend the structure through its main axis of symmetry. It appears to be a prolate spheroid with strong concentrations of material along its equator. From Earth, the symmetrical axis is viewed at about 30°. Overall, the observed nebulosity has been currently estimated to be expanding for approximately 1,610 ± 240 years.- Wikipedia

Here's the location of the Ring Nebula in Lyra - I've found it fairly easily with my 8" Dobsonian telescope by just scanning around the middle area between the two stars in Lyra.

The Moon is a waning crescent, visible low to the east before sunrise.

The sun has not had a spot for 19 days; the northern coronal hole remains huge, the southern hole has diminished and appears almost closed. There is a large and almost cross-shaped coronal hole in the middle of the Sun's face.

Again there have been some impressive prominences on the Sun's limb over the last couple days.

Today marks 11 years in space for our IBEX mission, which maps our solar system’s boundary to interstellar space! 🎉 A new mission IMAP will launch in 2024 to continue the work IBEX began years ago: understanding this boundary that shields and protects us https://t.co/b3VgGyDvUG

One step closer to launch 🚀Our upcoming Lucy mission has passed a major milestone, and the team is now ready to begin building hardware. Lucy will be the first space mission to study the Trojan asteroids, which orbit the Sun at the distance of Jupiter: https://t.co/R0w5joddoW pic.twitter.com/Gr7igbOHvF

The Orionid Meteor Shower peaks tonight. We will be LIVE streaming the shower from 3 of our All Sky stations starting at sun set local time.

Position of the planets and some spacecraft in the inner solar system, Oct. 22 2019 - the orbit of asteroid 101955 Bennu is highlighted. Credit: NASA Eyes on the Solar System / Bob Trembley.

Position of the planets in the middle solar system, Oct. 22, 2019. Credit: NASA Eyes on the Solar System / Bob Trembley

Position of the planets in the outer solar system, Oct. 22, 2019. Credit: NASA Eyes on the Solar System / Bob Trembley

28978 Ixion (/ɪkˈsaɪ.ən/ ik-SY-ən), provisional designation 2001 KX76, is a plutino (an object that has a 2:3 orbital resonance with Neptune). Brown and Tancredi calculate that it is very likely to be a dwarf planet, although the IAU has not officially classified it as such. It was discovered on May 22, 2001 by the Cerro Tololo Inter-American Observatory. It is named after Ixion, a figure from Greek mythology.

Analysis of the lightcurve's brightness variation shows only small deviations, which suggests that Ixion is a spheroid with small albedo spots and hence a dwarf planet. It has a diameter of approximately 650 km, making it about the fifth-largest plutino. It is moderately red in visible light and has a surface made of a mixture of tholin and water ice.  -Wikipedia

This image shows a variety of rocks with different textures and sizes located near Bennu’s equator. It was taken on August 5, from 0.4 miles (0.6 km) away. The longest axis of the bright boulder in the upper right is 11 ft (3.3 m), about the size of a patio umbrella.

The mole is digging deeper into #Mars thanks to the tremendous efforts by my team. Unofficial depth is ~38 cm down in the ground, almost the length of the mole (40 cm). This may be the last time we see the mole, more drilling later this week. #SaveTheMole #DiggingMars pic.twitter.com/c1sZsGSLxj

The Dewey Soper Bird Sanctuary in #Canada is marked by its diverse terrain and the large number of snow #geese that gather there. https://t.co/rT6TvmlfAG #NASA #Landsat pic.twitter.com/pDT4tkNnzZ

Learn about the causes and effects of extreme weather – hurricanes, wildfires, drought, snowstorms and more – plus how @NASA studies them and students can, too, in our latest #TeachableMoment! https://t.co/BclLOl5Vr9@NASAClimate

While a growing Greenland glacier may seem like good news, there’s no evidence it means global warming is slowing down. https://t.co/trfkp6AmLx

You may remember the multiple-exoplanet TRAPPIST-1 system discovered a few years ago:

Artist's concept shows what the TRAPPIST-1 planetary system may look like, based on available data about the planets' diameters, masses and distances from the host star. Image credit: NASA/JPL-Caltech

I visited TRAPPIST-1 in SpaceEngine and flew-around it looking for a photogenic planet. After finding one, I time-accelerated until the inner planets appeared on the same side of the star.

Artist’s conception of sunrise on exoplanet TRAPPIST-1 f – a conjunction of the other TRAPPIST-1 exoplanets can be seen. Credit: SpaceEngine / Bob Trembley 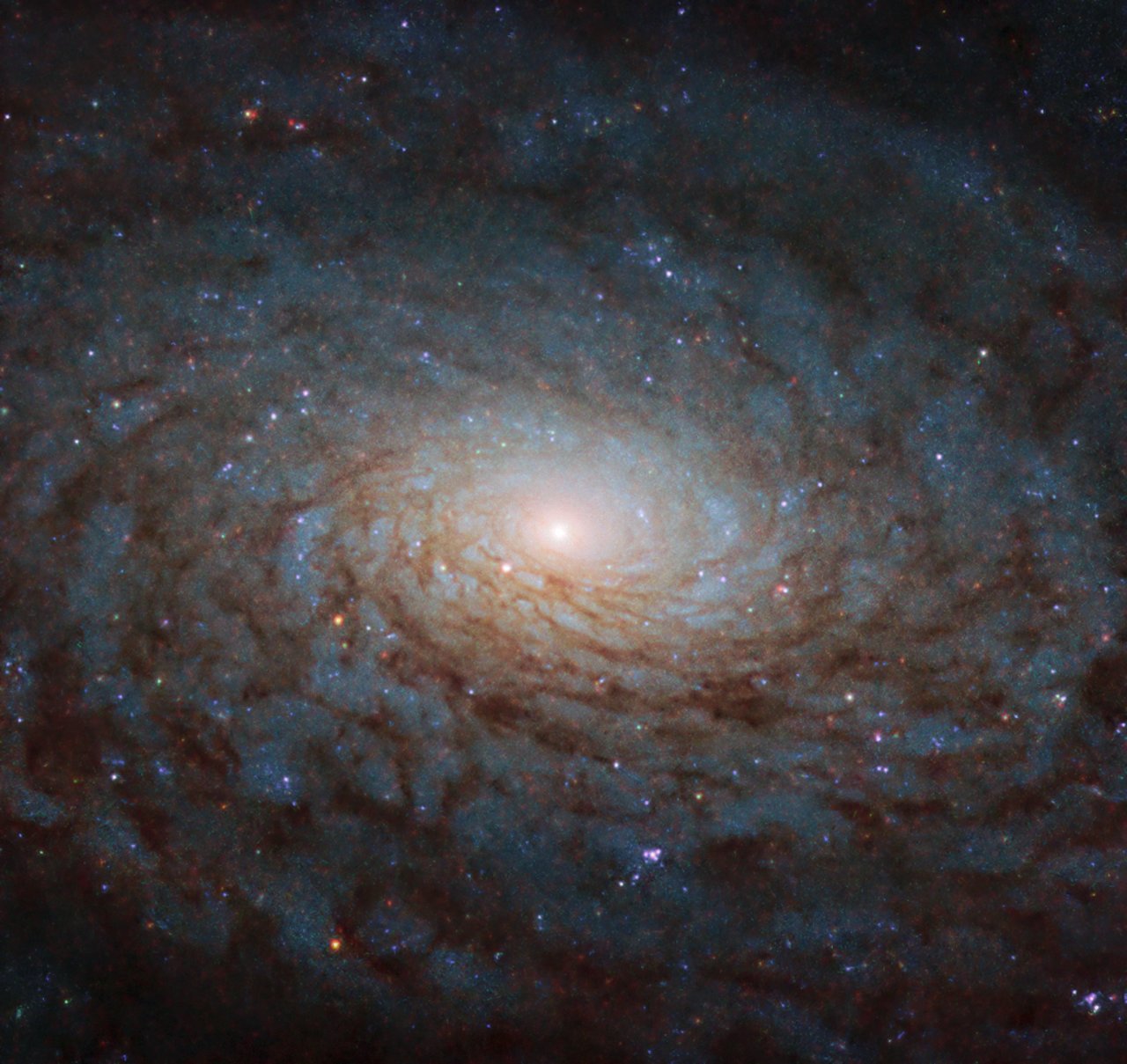 The galaxy NGC 4380 looks like a special effect straight out of a science fiction or fantasy film in this Hubble Picture of the Week, swirling like a gaping portal to another dimension. Credit: ESA/Hubble & NASA, P. Erwin

This NASA/ESA @HUBBLE_space Telescope image of galaxy NGC 4380 looks like it's straight out of a #SciFi film. But, in the grand scheme of things, it's actually quite ordinary. Spiral galaxies are the most common type of #galaxy in the #Universe 👉 https://t.co/ChJZl79Vdi pic.twitter.com/gaqVswlkzi

I've been waiting for weeks for this update to be released - the upgrade to the underlying graphics engine has made KSP a LOT faster! As with all major KSP updates, most mods were broken, and a new career-mode game needed to be started - here's my first (manually-landed) crewed Moon (Mun) lander: