Saturn and Jupiter are excellent observing targets all week after sunset - Jupiter is getting lower towards the horizon each evening. I'm also noting that it's getting darker earlier each evening.

Saturn and Jupiter in the southwestern sky after sunset on Oct. 15, 2019. Credit: Stellarium / Bob Trembley

The Moon appears in the predawn sky this week, moving from west to east; the waning gibbous Moon appears high in the western sky before sunrise on Oct. 15 & 16th.

On Oct. 17 and 18th, the waning gibbous Moon appears near the star Aldebaran in the southwestern predawn sky.

The third-quarter Moon appears high in the southern predawn sky near the star Pollux on Oct. 21st.

Orion was again impossible to miss high in the southern predawn sky.

Betelgeuse is generally the ninth-brightest star in the night sky and second-brightest in the constellation of Orion (after Rigel). It is a distinctly reddish, semiregular variable star whose apparent magnitude varies between +0.0 and +1.3, the widest range of any first-magnitude star. At near-infrared wavelengths, Betelgeuse is the brightest star in the night sky. It has the Bayer designation α Orionis, which is Latinised to Alpha Orionis and abbreviated Alpha Ori or α Ori.

Classified as a red supergiant of spectral type M1-2, Betelgeuse is one of the largest stars visible to the naked eye. If Betelgeuse were at the center of the Solar System, its surface would extend past the asteroid belt, engulfing the orbits of Mercury, Venus, Earth, Mars, and possibly Jupiter. However, there are several other red supergiants in the Milky Way that are larger, such as Mu Cephei and VY Canis Majoris. Calculations of its mass range from slightly under ten to a little over twenty times that of the Sun. It is calculated to be 640 light-years away, yielding an absolute magnitude of about −6. Less than 10 million years old, Betelgeuse has evolved rapidly because of its high mass. Having been ejected from its birthplace in the Orion OB1 Association—which includes the stars in Orion's Belt—this runaway star has been observed moving through the interstellar medium at a speed of 30 km/s, creating a bow shock over four light-years wide. Betelgeuse is in the last stages of its evolution, and it is expected to explode as a supernova within the next million years. - Wikipedia

This is the first direct image of a star other than the Sun, made with the Hubble Space Telescope. Called Alpha Orionis, or Betelgeuse, it is a red supergiant star marking the shoulder of the winter constellation Orion the Hunter. The Hubble image reveals a huge ultraviolet atmosphere with a mysterious hot spot on the stellar behemoth's surface. The enormous bright spot, more than ten times the diameter of Earth, is at least 2, 000 Kelvin degrees hotter than the surface of the star. Credit: Andrea Dupree (Harvard-Smithsonian CfA), Ronald Gilliland (STScI), NASA and ESA

The Moon will be a waning gibbous, rising after sunset, visible high in the sky after midnight, and visible to the southwest after sunrise.

The third-quarter Moon occurs on October 21st, rising around midnight, and visible to the south after sunrise.

The sun has been spotless for 12 days; coronal holes appear at both poles - with a tendril stretching up towards the equator from the south pole. 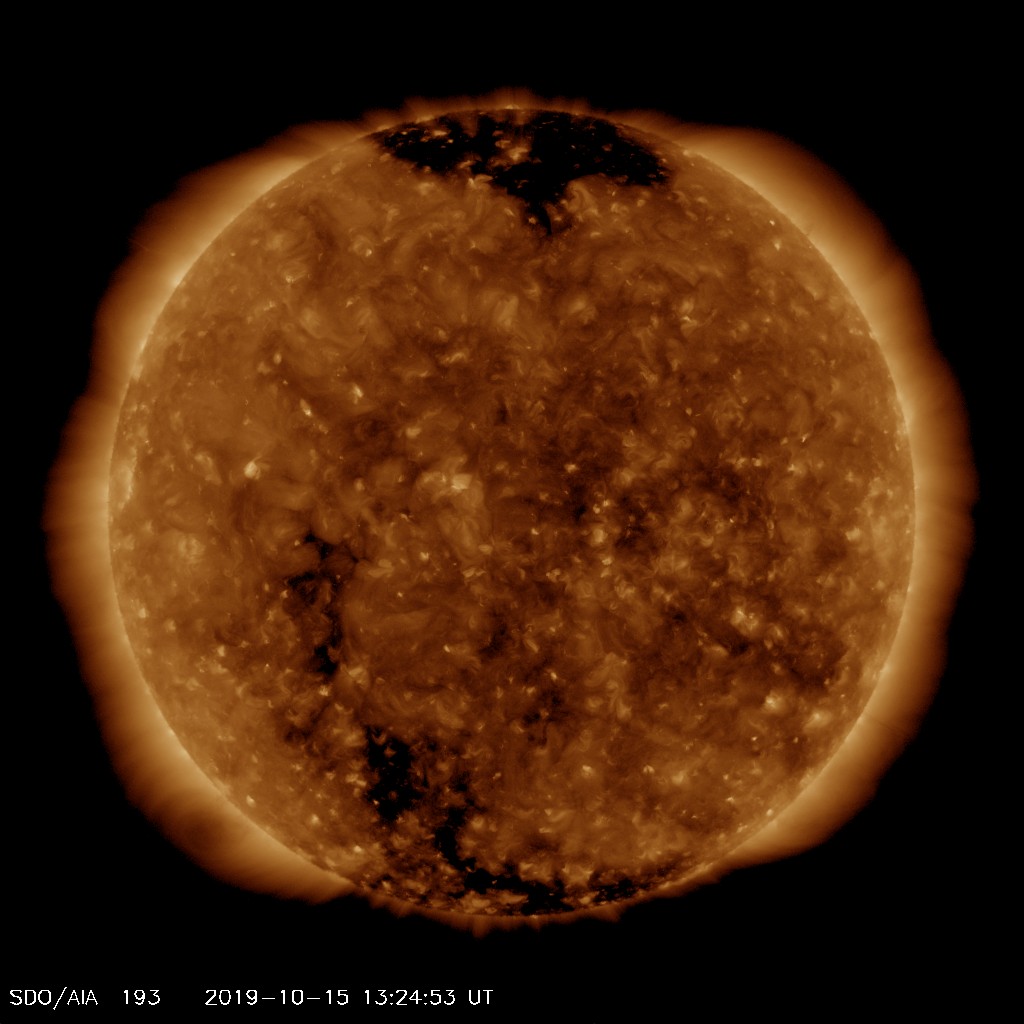 Some impressive prominences on the Sun's limb! I enlarged a couple below. 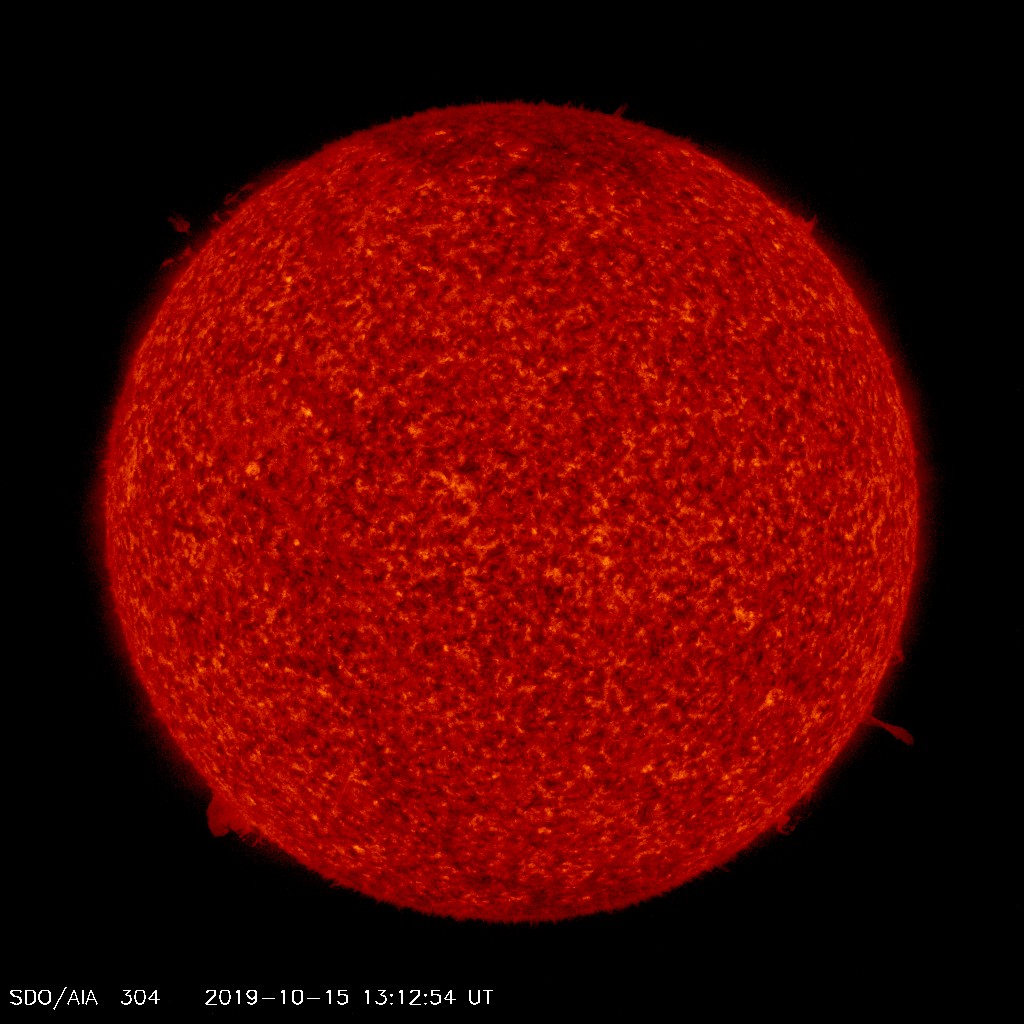 Prominences on the Sun - Oct. 15 2019 see in 304 Angstroms. Image courtesy of NASA/SDO and the AIA, EVE, and HMI science teams, edited by Bob Trembley.

⬇️ View from the underside of the @northropgrumman L-1011 Stargazer aircraft, which dropped the Pegasus rocket carrying #NASAICON from 39,000 feet over the ocean. pic.twitter.com/YsiYJiQJW1

LIVE NOW: Asteroid deflection will soon be a reality. Find out how with Alan Fitzsimmons #Planetarydefence #hera https://t.co/RP7eOdOfgR

It started to brighten at an elevation of 90 km ne... pic.twitter.com/GpaQPelPxO

Position of the planets and some spacecraft in the inner solar system, Oct. 15 2019 - the orbit of asteroid 101955 Bennu is highlighted. Credit: NASA Eyes on the Solar System / Bob Trembley.

Position of the planets in the middle solar system, Oct. 15, 2019. Credit: NASA Eyes on the Solar System / Bob Trembley

Position of the planets in the outer solar system, Oct. 15, 2019. Credit: NASA Eyes on the Solar System / Bob Trembley

2014 UZ224 a trans-neptunian object (TNO) and possible dwarf planet orbiting in the scattered disc. As of October 2018, it was approximately 90.7 astronomical units (1.357×1010 km) from the Sun, and will slowly decrease in distance until it reaches its perihelion of 38 AU sometime near 2142. The discoverers have nicknamed it "DeeDee" for "Distant Dwarf".

Artist's conception of the surface of 2014 UZ224, looking towards the Sun - the band of the Milky Way on the left. Credit: SpaceEngine / Bob Trembley

Pictured: large, similar textured boulders located in asteroid Bennu’s northern hemisphere. The image was taken on August 2, from 0.4 miles (0.7 km) away. The long, horizontal boulder (right center) is 18 ft (5.5 m) long, about the length of a full-size pickup truck.

The way these boulders are stacked is rather satisfying.

This hypothetical Neptune-like exoplanet orbits the smaller of two stars in a binary star system; for a short period during the exoplanet's orbit, the larger star appears on the opposite side of the sky from the exoplanet's host star - creating very thin band of shadow on the exoplanet.

When the two stars are about 90° apart, the shadow spreads into a wedge - I guess this would be the Startled Cat's Eye Gas Giant!

Hypothetical Cat's Eye Exoplanet when the stars are at an 90° angle in the sky. Credit: SpaceEngine / Bob Trembley

We’re saddened by the loss of legendary @roscosmos cosmonaut Alexei Leonov who became the first human to walk in space on March 18, 1965. His venture into the vacuum of space began the history of extravehicular activity that makes today’s @Space_Station maintenance possible. pic.twitter.com/8EavxJd5R1

I'm embarrassed to admit that I was unaware that cosmonaut Leonov was also an artist!

Besides his outstanding role in space exploration, #Leonov was a talented artist, and first man to paint in space. May he rest in peace. pic.twitter.com/HiyasbmicM