Last week I had students in my after-school astronomy and space science club build and fly rockets in Kerbal Space Program. I had them launch and recover a small pre-made rocket, and build-from-scratch a sub-orbital crewed rocket, similar to a Mercury Redstone. The very next day, I gave the "In the News" report at the meeting of the Warren Astronomical Society - I shamelessly pulled material from my previous "In the Sky" post; I included a slide about the Europa Clipper mission, and a couple about mid-ocean rift ecosystems and extremophiles.

Saturn is high, and Venus and Jupiter are both very low and near each other above the the southwestern horizon after sunset this week. Credit: Stellarium / Bob Trembley

Kerbal Space Program has been posting bits of astronomy news and space history on their social media feeds lately - I approve!

There's a Venus & Jupiter conjunction on Nov 24th. A conjunction is when any two astronomical objects appear closer together in the sky, as observed from Earth. Look for this impressive sight in the western sky just after sunset. #LessonsWithLinus pic.twitter.com/ZVkdpSTUBg

A very thin waxing crescent Moon joins the conjunction of Venus and Jupiter on November 28th.

The Moon appears near Saturn high above the southwestern horizon after sunset on Nov. 29th. Credit: Stellarium / Bob Trembley

Mercury appears above the southeastern horizon before sunrise this week, with Mars and the star Spica  lining up with each other. I actually went outside to see if I could see Mercury this morning, but there was so much haze in the air that I could barely see Mars - the horizon was completely obscured.

Mercury, Mars and the star Spica appear in a line above the southeastern horizon before dawn this week. Credit: Stellarium / Bob Trembley

What's that bright star in the southern sky after sunset? Fomalhaut.

The star Fomalhaut is the bright star to the south after sunset this week. Credit: Stellarium / Bob Trembley

The constellation Canis Major and Sirius, the brightest star in our skies, rises in the southeastern sky at midnight.

As I was writing this post, I wondered what the sky from the south pole would look like, so I set Stellarium's location there, and had a eye-blink moment when I saw "north" as the only cardinal coordinate all the way around me.

Messier 41 (also known as M41 or NGC 2287) is an open cluster in the constellation Canis Major. It was discovered by Giovanni Batista Hodierna before 1654 and was perhaps known to Aristotle about 325 BC. M41 lies about four degrees almost exactly south of Sirius, and forms a triangle with it and Nu2 Canis Majoris—all three can be seen in the same field in binoculars. The cluster itself covers an area around the size of the full moon. It contains about 100 stars including several red giants, the brightest being a spectral type K3 giant of apparent magnitude 6.3 near the cluster's center, and a number of white dwarfs. The cluster is estimated to be moving away from us at 23.3 km/s. The diameter of the cluster is between 25 and 26 light years. It is estimated to be 190 million years old, and cluster properties and dynamics suggest a total life expectancy of 500 million years for this cluster, before it will have disintegrated. - Wikipedia

The new Moon occurs on Nov. 26th, and will not be visible for a couple days.

After Nov. 26th, the Moon will be a waxing crescent, visible toward the southwest in early evening.

Kerbonauts, which moon phase is best for viewing faint stellar objects?
🌚We'll give you a hint, it's happening tomorrow!#LessonsWithLinus pic.twitter.com/RcbTS567Ew

OK... this would completely creep-out my arachnophobic wife, but I can see why multi-legged insect-like robot designs would have a lot of potential for planetary exploration.

The UK is sending a small, four-legged robot to the Moon in 2021. The tiny rover, which looks like a cross between a spider and a children’s toy, will be the first Moon rover for the U.K. It will also be the first rover with legs to walk on the Moon. https://t.co/KB9VMf4T9y

The Sun has been spot-free for 13 days; the northern coronal hole seems to have enlarged from last week, and there is a large southern hole this week. A smaller coronal hole appears below the equator - where there is also a region of coronal loop activity. 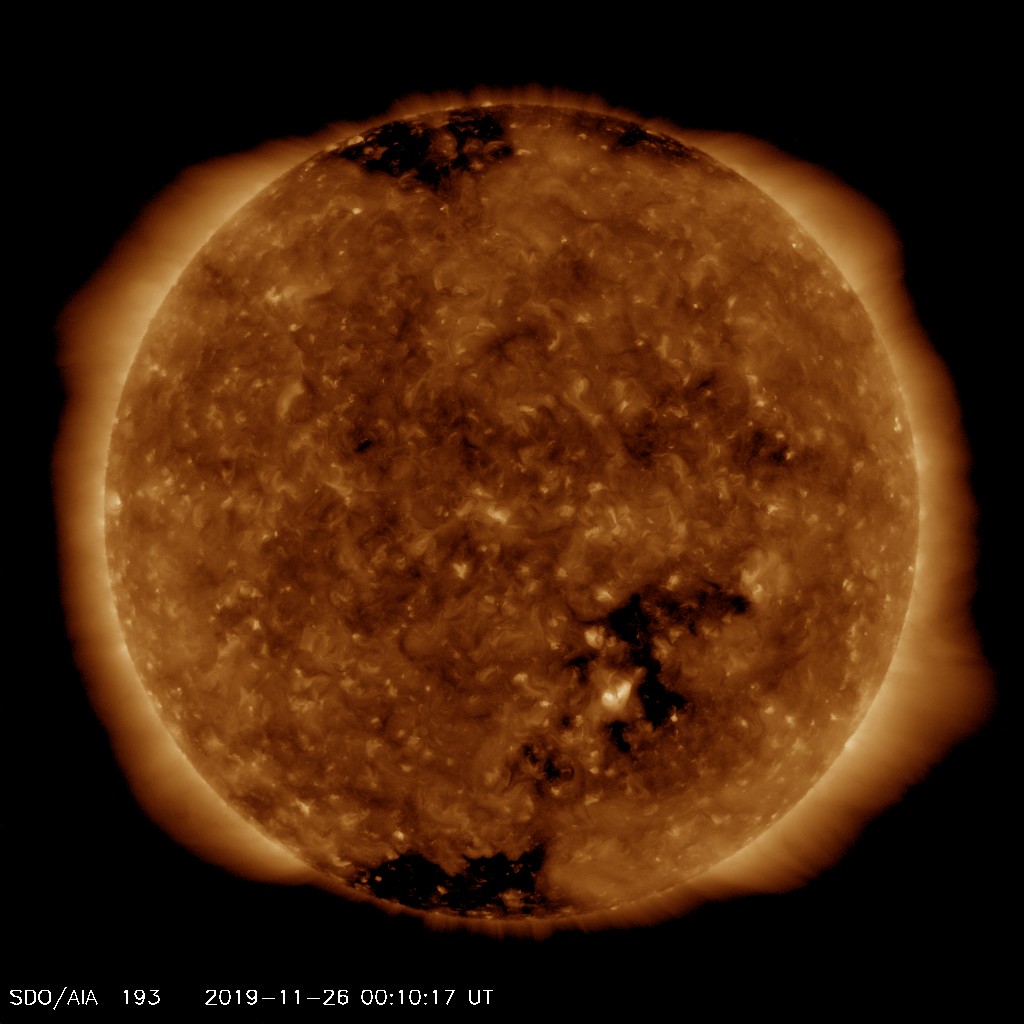 A rather large set of prominences on one limb of the Sun today! I'm going to have to crack out my solar telescope when I finish this post! 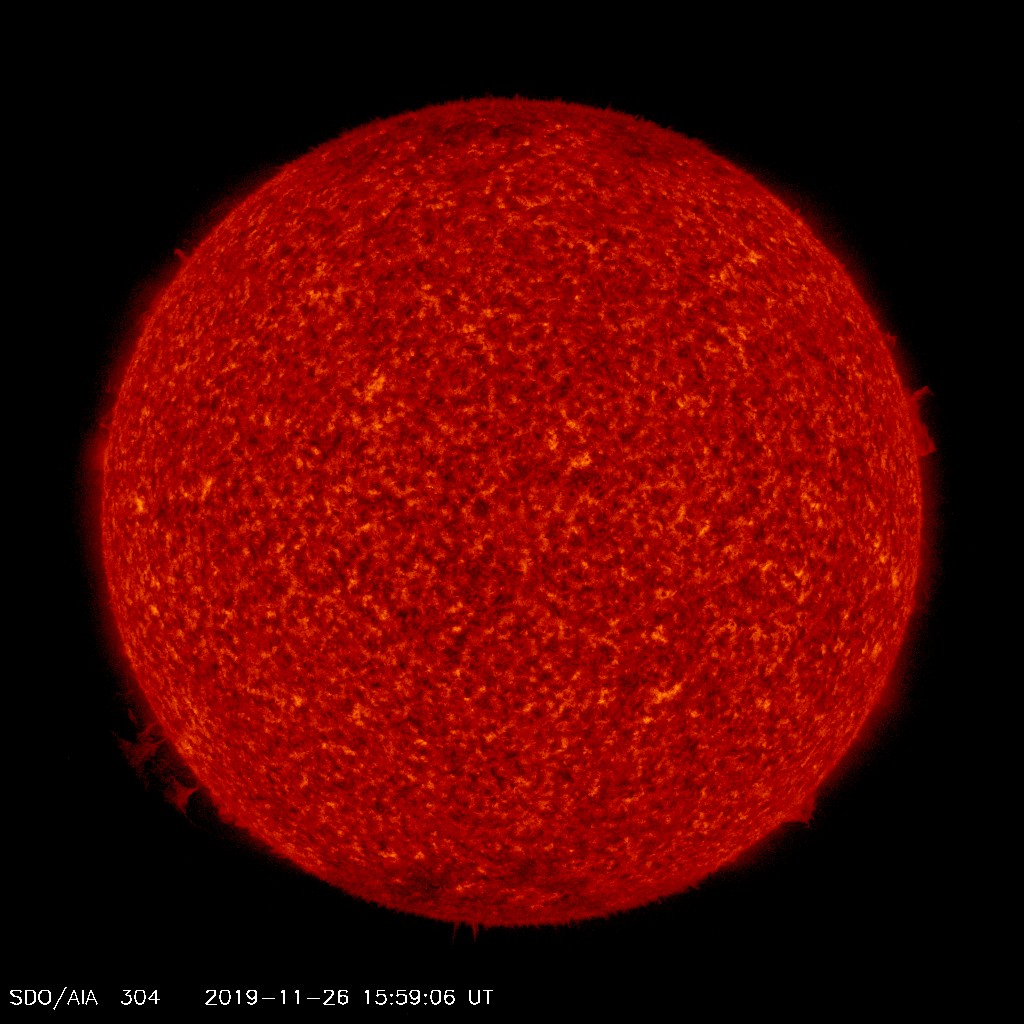 Each second, 1.5 million tons of solar material shoot off the Sun into space. The magnetosphere shields Earth, but the solar wind can get in near the poles and disrupt satellite, radio & GPS signals. 3 new missions aim to improve this technology problem: https://t.co/EER7pSZWZM pic.twitter.com/YO3CuTXnHi

With an asymmetric, butterfly pattern-like, ejecta blanket, this may be indicative of a low angle asteroid impact. Our imaging will allow us to determine if that’s the case, or if the asymmetry is due to erosional processes.https://t.co/QXY4KswIcg pic.twitter.com/bagY2p2VZ2

#Meteor over #Madison #LakeMendota Saturday night! Captured by rooftop cameras on our building at @UWMadison. HT @PTH1 for finding the footage! https://t.co/rqegt1vM21 pic.twitter.com/xD8USej8U5

Another day, another meteor caught on MCTS bus cameras! Check out the view looking north over Milwaukee around 5:42 p.m. on Saturday, November 23rd. https://t.co/EYMCE08Iw4 pic.twitter.com/ojtZblnN4q

It's great to announce that @DrBrianMay is joining our mission's science team! ESA Study Scientist for Comet Interceptor @mggtTaylor welcomes Brian on board... pic.twitter.com/DPvHqvkaRx

Position of the planets and some spacecraft in the inner solar system, Nov. 26, 2019. Credit: NASA Eyes on the Solar System / Bob Trembley.

Position of the planets in the middle solar system, Nov. 26, 2019. Credit: NASA Eyes on the Solar System / Bob Trembley.

Position of the planets in the outer solar system, Nov. 26, 2019. Credit: NASA Eyes on the Solar System / Bob Trembley.

Position of binary transneptunian object (TNO) and possible dwarf planet 38628 Huya and its satellite in the outer solar system:

38628 Huya (/huːˈjɑː/ hoo-YAH), provisional designation 2000 EB173, is a trans-Neptunian object with a large satellite. It is located in the Kuiper belt, a region of icy objects orbiting beyond Neptune in the outer Solar System. Huya is classfied as a plutino, a dynamical class of trans-Neptunian objects with orbits in a 3:2 orbital resonance with Neptune. It was discovered by the Quasar Equatorial Survey Team and was identified by Venezuelan astronomer Ignacio Ferrín in March 2000. It is named after Juyá, the mythological rain god of the Wayuu people native to South America.

Huya's surface is moderately red in color due to the presence of complex organic compounds on its surface. Water ice has been suspected to be also present on its surface, although water ice has not been directly detected on Huya. Huya is considered as a mid-sized trans-Neptunian object, with an estimated diameter of about 400 km (250 mi). Huya was considered to be a possible dwarf planet, though its relatively small size and dark surface imply that it never collapsed into a truly solid body and thus may never have been in hydrostatic equilibrium. - Wikipedia

Like Pluto and Charon, Huya and its satellite orbit around a barycenter; the Huya system's barycenter is just below the surface of Huya:

Artist conception of the Huya System: the orbit of its satellite S/2012(38628) 1 is shown in red - the system's barycenter also shown in red. Credit: SpaceEngine / Bob Trembley.

The team is in the midst of selecting the final primary and backup sample collection sites! Each site has its particular perks — and its own obstacles. The team is mulling over all of these as they make their decision.

Next up for the judges…

The three NASA astronauts on board the station, @Astro_Christina, @Astro_Jessica and @AstroDrewMorgan, share what #Thanksgiving means to them and get a look at what the holiday in space will be like in 2019. pic.twitter.com/fEgZIHIrf7

Artist conception of brown dwarf Luhman 16 A, its companion is highlighted in the distance. Credit: SpaceEngine / Bob Trembley.

A brown dwarf is a type of substellar object occupying the mass range between the heaviest gas giant planets and the lightest stars, having a mass between approximately 13 and 75–80 times that of Jupiter (MJ), or approximately 2.5×1028 kg to about 1.5×1029 kg. Below this range are the sub-brown dwarfs (sometimes referred to as rogue planets), and above it are the lightest red dwarfs. Brown dwarfs may be fully convective, with no layers or chemical differentiation by depth.

Unlike the stars in the main sequence, brown dwarfs are not massive enough to sustain nuclear fusion of ordinary hydrogen (1H) to helium in their cores. They are, however, thought to fuse deuterium (2H) and to fuse lithium (7Li) if their mass is above a threshold of 13 MJ and 65 MJ, respectively. It is also debated whether brown dwarfs would be better defined by their formation processes rather than by their nuclear fusion reactions.

Stars are categorized by spectral class, with brown dwarfs designated as types M, L, T, and Y. Despite their name, brown dwarfs are of different colors. Many brown dwarfs would likely appear magenta to the human eye, or possibly orange/red. Brown dwarfs are not very luminous at visible wavelengths.

At a distance of about 6.5 light years, the nearest known brown dwarf is Luhman 16, a binary system of brown dwarfs discovered in 2013. HR 2562 b is listed as the most-massive known exoplanet (as of December 2017) in NASA's exoplanet archive, despite having a mass (30±15 MJ) more than twice the 13-Jupiter-mass cutoff between planets and brown dwarfs. -  Wikipedia

Orbits of Binary Brown Dwarfs of the Luhman 16 System:

Figure 21 says it all. When you split up the population of substellar imaged companions by mass or mass ratio, the eccentricity distributions are distinct. This points to different formation mechanisms. pic.twitter.com/hIPTz7ab28

In an urban environment, people sometimes forget about the beauty of the night sky. A new exhibit called "Chicago's Night Sky" at the Adler Planetarium wants to change that. https://t.co/fYJcmiHc2q

#HubbleClassic Have you heard of the Hubble Deep Field, showing galaxies in a tiny part of sky near the Big Dipper? Did you know there's a Hubble Deep Field South? This image, released in November 1998, shows galaxies in the southern constellation Tucana. pic.twitter.com/i0y6IXxEcr