I hope you had better luck than I did seeing the transit of Mercury... a good portion of North America was shrouded in clouds - I got several inches of snow!

Even the website I pointed readers to last week to view the transit online was not broadcasting due to clouds. I ended up watching it on NASA's Solar Dynamics Observatory's (SDO) Eclipse website - clouds are never a problem for the SDO.

Venus and Jupiter appear very low and Saturn appears  high in the southwestern sky after sunset this week over the week. Jupiter moves slightly towards the horizon, and Venus moves slightly southward toward Jupiter.

Venus and Jupiter low and Saturn high above the southwestern horizon after sunset on Nov. 12th. Credit: Stellarium / Bob Trembley

By the beginning of next week Mercury returns, appearing low and Mars a bit higher above the eastern horizon before sunrise this week. If you are having trouble spotting Mercury, you can use Mars and the star Spica to star-hop in the general direction of Mercury.

The planets Mercury and Mars are low on the southeastern horizon before dawn this week. Credit: Stellarium / Bob Trembley

The Moon appears high in the sky at midnight, and moves across the sky from south to east this week.

The Moon moving through the constellations Taurus, and Gemini this week. Credit: Stellarium / Bob Trembley

The Moon appears near the star Aldebaran at midnight on Nov. 14th.

The Moon near the star Aldebaran in the constellation Taurus on Nov. 14th at midnight. Credit: Stellarium / Bob Trembley

The Moon appears near the star Pollux at midnight on Nov. 17th.

From the southern hemisphere, the planets that appear across our southwestern sky near sunset appear nearly vertically!

The Moon is Full, rising at sunset, visible high in the sky around midnight, and visible all night.

A special thank you today to our veterans. We wouldn’t have made it to the Moon without you. #HappyVeteransDay2019 pic.twitter.com/HYolIdzcoI

The Sun has a spot; a new sunspot is emerging from the Sun's limb. At the time of this writing, the sunspot has no AR designation.

Coronal holes appear at both poles, and a weird smaller coronal is snaking its way up from te south pole. 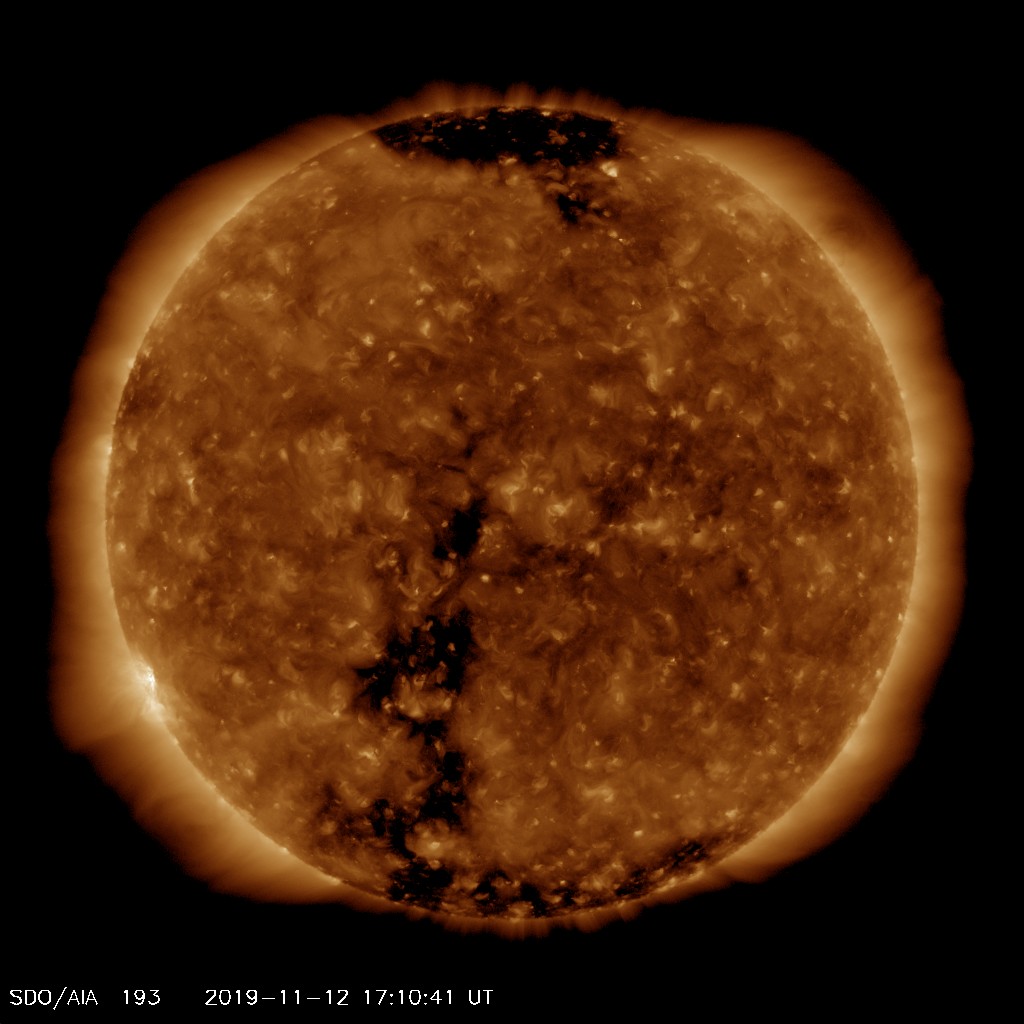 A a couple large prominences on the Sun's limb today - look at that monster on the upper right! The unnamed Active Region can be seen on the lower left. 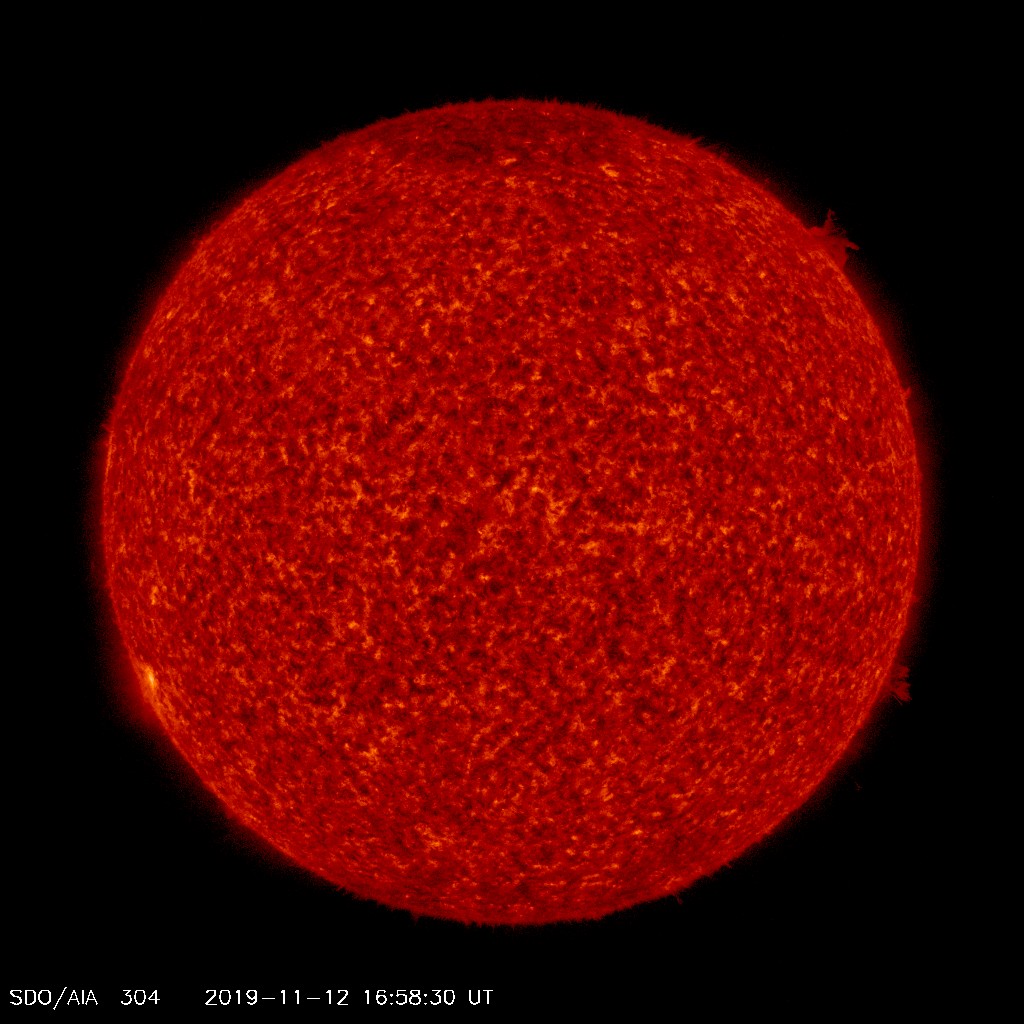 📷 This image was captured by the spacecraft's WISPR instrument in November 2018, during the mission's first solar flyby. pic.twitter.com/YJIHGTVlaL

(188693) Roosevelt = 2005 TO14
Discovered 2005 Oct. 3 by R. A. Kowalski at the Catalina Sky Survey.
Theodore Roosevelt (1858–1919) was the 26th President of the United States and is one of the most admired leaders in American history. Among his many accomplishments he is well known for his conservationism, having established the US Forest Service, five National Parks, 18 National Monuments, and 150 National Forests.

(35394) Countbasie = 1997 XD9
Discovered 1997 Dec. 7 at Caussols.
William James “Count” Basie (1904–1984) was an American jazz pianist, organist, bandleader and composer. One of the greatest jazz musicians of the 20th century,
he founded the Count Basie Orchestra in 1935 and left an impressive discography.

(5773) Hopper = 1989 NO
Discovered 1989 July 2 by E. F. Helin at Palomar.
Grace Hopper (1906–1992) was an American computer scientist and rear admiral in the United States Navy. A pioneer in programming, she invented one of the first compilers and was instrumental in the development of COBOL. She was awarded over 40 honorary degrees in her lifetime, as well as the Presidential Medal of Freedom in
2016.

(6486) Anitahill = 1991 FO
Discovered 1991 Mar. 17 by E. F. Helin at Palomar.
Anita Hill (b. 1956) is an American attorney and professor. Her testimony in the confirmation hearings of US Supreme Court Justice Clarence Thomas inspired
generations of women to speak out against harassment and led to more women in US politics. She continues to advocate for human rights.

In other astronomy news, an unknown comet may have shed a big pile of material that the Earth will plunge through next week, causing a meteor storm.

No, I’m not kidding. Bonus: They’ll appear to come from a constellation depicting a unicorn.https://t.co/w61vTlMLDx

Position of the planets and some spacecraft in the inner solar system, Nov. 12, 2019. Credit: NASA Eyes on the Solar System / Bob Trembley.

Position of the planets in the middle solar system, Nov. 12, 2019. Credit: NASA Eyes on the Solar System / Bob Trembley.

Position of the planets and a several bodies in the outer solar system, asteroid 471143 Dziewanna is highlighted:

471143 Dziewanna /dʒɪˈvænə/, provisional designation 2010 EK139, is a trans-Neptunian object in the scattered disc, orbiting the Sun in the outermost region of the Solar System.

It was discovered on 13 March 2010, by astronomers Andrzej Udalski, Scott Sheppard, Marcin Kubiak and Chad Trujillo at the Las Campañas Observatory in Chile. The discovery was made during the Polish OGLE project of Warsaw University. Based on its absolute magnitude and assumed albedo, it is possibly a dwarf planet with a calculated diameter of approximately 470 kilometers.

It was named after Devana (Polish form: Dziewanna), a Slavic goddess of the wilderness, forests and the hunt.  - Wikipedia

Artist conception from above the surface of asteroid 471143 Dziewanna. Credit: SpaceEngine / Bob Trembley.

I’ve moved my arm away from the mole to snap pictures of the pit. Lighting at different angles can help show us the material we’re up against within the Martian subsurface. @NASA and @DLR_en teams are analyzing results.🔎
FAQ: https://t.co/wnhp7c1gPT pic.twitter.com/H3S0ulLhAK

When I saw this image, it got an immediate "Oh! WOW!" So I HAD to post it:

How might planting hundreds of billions of 🌲 impact climate change & our planet? We look at some of the pros & cons of planting trees as one climate mitigation strategy & how NASA is contributing to research on the viability of global forest restoration. https://t.co/fuqSPa4ZCD

I saw this tweet about exoplanet 51 Eri b, and went to that exoplanet in SpaceEngine:

A new exoplanet orbit movie just in time for #ExoCup2019. A 4-year time-lapse of 51 Eri b, the coolest directly imaged exoplanet to date! We just published the updated orbit from the Gemini @PlanetImager in a paper led by Rob De Rosa (https://t.co/x8LpOGJECb). https://t.co/bbb29aV8il pic.twitter.com/vQws75qDfR

51 Eridani b is a "Jupiter-like" planet that orbits the young star 51 Eridani, in the constellation Eridanus. It is 96 light years away from the solar system, and it is approximately 20 million years old. - Wikipedia

I got a contract in my career-mode sim to expand an existing space station by adding a science lab; this requires a spacecraft that can lift the lab (left) and a remote guidance unit capable of performing orbital rendezvous and docking maneuvers.