Mercury appears with Venus in the eastern predawn sky all week - the planets are joined by the waning crescent Moon on the mornings of Nov. 12th and 13th.

Mercury and Venus appear in the eastern predawn sky all week - they are joined by the waning crescent Moon on Nov. 12th and 13th. Credit: Bob Trembley / Stellarium.

The conjunction of the two planets, the Moon and the star Spica on the morning of Nov. 13th is likely to be distracting to drivers travelling eastward - drive safe!

Conjunction of Mercury, Venus, the Moon and the star Spica in the eastern predawn on Nov. 13th. Credit: Bob Trembley / Stellarium.

Jupiter and Saturn appear in the south-southwestern sky at dusk - still great observing targets, but look quick - you only have a couple hours before they set in the southwest.

I was wondering what those 2 stars were I was seeing through the skylight as I was making my coffee at 3:00 AM... "I'll bet they are Castor and Pollux in the constellation Gemini." Called it! 🙂

I really miss having people look through my telescope and say "Oh WOW!" or use my virtual reality headset to fly over the rings of Saturn and have their minds completely blown away...

After Nov. 15th, the Moon will be a waxing crescent, visible toward the southwest in early evening.

Annotated close-up of a section of the Moon on Nov. 11th. - showing the play of shadows along the terminator. Visualizations by Ernie Wright / NASA's Scientific Visualization Studio.

The technologies we're developing for #Artemis – to help our astronauts explore more of the lunar surface than ever before – won't fit in one picture. Check out our #NASAMoonKit, showing some of the new innovations we're building and testing for the Moon: https://t.co/nPhhQoFAoZ pic.twitter.com/szW4FXkyWp

Sunspot AR2781 is large and poses a slight threat for M-class solar flares. 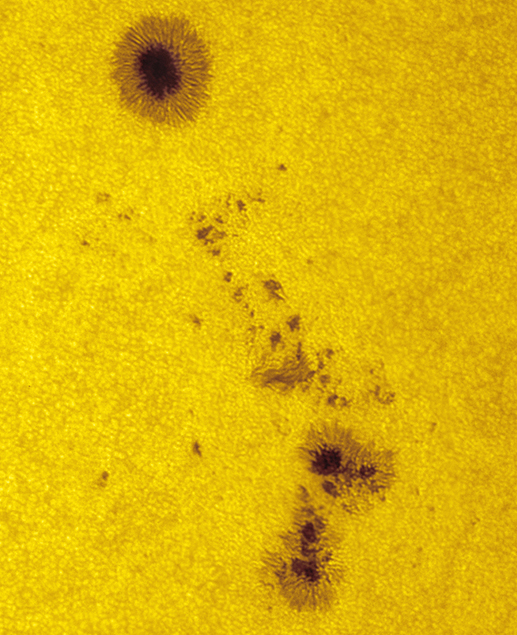 Sunspot AR2781 has a lot of coronal activity associated with it - you can see it in the Sun's southern hemisphere in the video below. Both the northern and southern coronal holes have reduced in size from last week.

Moderate prominence activity over the last couple days; the region of AR2781 looks like a huge orange wound on the Sun's face.

Did you know that the solar cycle has been regularly recorded by hand since 1755? In fact, some sunspot measurements date as far back as 3,000 years ago! 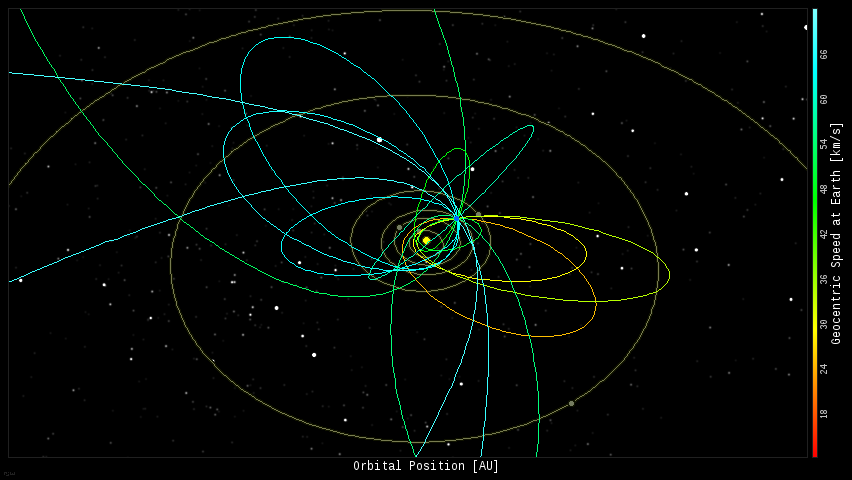 Fireball caught over the #NewYork & #Connecticut on Nov 8 - 215+ reports so far.

The online content of September - October 2020 has been edited and archived in eMeteorNews (eMN_2020_6, November issue). MeteorNews is available without membership requirements. If you... pic.twitter.com/obZBbAxIkG

Position of the planets and a couple spacecraft in the inner solar system, 2020-11-10. Credit: NASA Eyes on the Solar System / Bob Trembley.

Position of the planets in the middle solar system, 2020-11-10. Credit: NASA Eyes on the Solar System / Bob Trembley.

Position of the planets and some transneptunian objects in the outer solar system, 2020-11-10. Credit: NASA Eyes on the Solar System / Bob Trembley.

The solar system is a LOT more fragile than I would've thought.

Comets? They're essentially made of frozen cappuccino froth.https://t.co/behvIdf8lo

Since March, @NASAVoyager 2 has been flying solo because of repairs and upgrades to the antenna we use to talk to the spacecraft. On Oct. 29, we sent commands to Voyager 2 for the first time in months — and the spacecraft responded to the call. 📡〰️🛰 https://t.co/TdFCAEQ4QO pic.twitter.com/6d3Drg6HgU

The Exp 64 crew worked physics, biology and spacewalk preps today as four @Commercial_Crew astronauts count down to a Nov. 14 launch to the station. More... https://t.co/Yir7AEH1nF pic.twitter.com/ORLxEFSvza

HiPOD 10 Nov 20: Erosion of a Crater Rim near Maadim Vallis

There is possible hydro-erosion and riverbed-like deposits in this image, and it will be interesting to learn if the crater might have pushed up some layered sediments from the canyon floor. https://t.co/gS385yNjiS pic.twitter.com/vLAK5VzHoW

Stars are the building blocks of the cosmos! ✨ To better understand them, Hubble has embarked on its largest observing project yet.

The ULLYSES program uses Hubble’s ultraviolet sensitivity to learn more about the birth and evolution of stars: https://t.co/7xho1emixr pic.twitter.com/p0XefkZ7yk

The result? Coastal communities around the planet are experiencing flooding during high tides as well as increased storm surges — the intense waves that accompany hurricanes and tropical cyclones. pic.twitter.com/LGWqMYQjML

The exoplanet Kepler-70b has an average temperature hotter than the Sun’s surface. It used to be Jupiter-sized until it spent some time inside its now-dead star, a trip that destroys most planets – but not this one.#MondayMotivation: This day is yours.https://t.co/hMOHOpUfCt pic.twitter.com/cATP5KLDDN

Here's exciting new research from a team of scientists out of Germany, the USA, & Ireland. Results show that if street light modernization projects are done according to IDA’s lighting principles they reduce #lightpollution in meaningful & measurable ways!https://t.co/MyGKlIxBMx

This galaxy is "hot." 😎 To be precise, some of the stars pictured in this Hubble image are over six times hotter than our Sun! The blue color of this galaxy, UGCA 193, shows that many of its stars “burn” at very high temperatures: https://t.co/kUzko3vSkX#HubbleFriday pic.twitter.com/C7FZ9y4ChP

Continuing with my visual tour of nearby stars and their systems, we travel to Gliese 3622 (LHS 292), about 14.9 light years distant.

Gliese 3622 is about 14.9 light years from Sol; the plane (green) is aligned with the orientation of the plane of the Milky Way galaxy. Credit: SpaceEngine / Bob Trembley.

LHS 292 is a red dwarf in the constellation Sextans. It is far too faint to be seen with the unaided eye and requires a large amateur telescope to be seen visually. It lies relatively close to our star system at a distance of about 14.9 light years. It is a flare star, which means it can suddenly increase in brightness for short periods of time.. - Wikipedia