The Moon, Mars and Saturn are spread across the southern sky before dawn.

The Moon is high in the southern sky during the morning, and sets in the southwest shortly before 1:00 PM

Venus continues to play the role of the "evening star"- low in the western sky near sunset.

Jupiter, at opposition this week, will be bright in the southern sky and visible all evening.

Cygnus, Lyra and Hercules are low in the eastern sky at midnight.

The Moon visible in the morning skies as a waning crescent just past third quarter. The Moon rises later each morning, and will look more "crescent-like" over the next few mornings; May 8-10th would be good days to do some early morning sidewalk astronomy at schools!

The Sun has a small spot near the equator that is decaying, and another spot rotating into view along the eastern limb. You can try to find the sunspots in this 4K image: [Link]

Coronal holes at both poles with an occasional hole at the equator seems to be "a thing" the last few months... because that's what we've got going on now! You can see the bright areas of coronal activity where the sunspots are. The new sunspot rotating into view is showing a lot of coronal loop activity.

The solar wind speed is 673 km/sec, with a density of 9.0 protons/cm3. Both of those numbers are the largest I've seen them since starting to report them. SpaceWeather.com says: "For the 4th day in a row, a stream of high-speed solar wind is blowing around Earth. The gaseous material is flowing from a wide hole in the sun's atmosphere--so wide that Earth could remain inside the stream for another 2 or 3 days. NOAA forecasters say there is a 50% chance of polar geomagnetic storms on May 8th as the solar wind speed tops 600 km/s (1.3 million mph)."

There have been some impressive prominences in the Sun's chromosphere over the last couple days. The sunspot rotating into view is clearly visible and showing a lot of activity.

Position of the planets in the inner solar system, May 8, 2018. Credit: NASA Eyes on the Solar System / Bob Trembley.

Position of the planets in the inner and middle solar system, May 8, 2018. Credit: NASA Eyes on the Solar System / Bob Trembley.

The Mars InSight mission launched on Saturday May 5th at 7:05 AM.

InSight, short for Interior Exploration using Seismic Investigations, Geodesy and Heat Transport, is a Mars lander designed to give the Red Planet its first thorough checkup since it formed 4.5 billion years ago. It is the first outer space robotic explorer to study in-depth the "inner space" of Mars: its crust, mantle, and core.

The lander uses cutting edge instruments, to delve deep beneath the surface and seek the fingerprints of the processes that formed the terrestrial planets. It does so by measuring the planet's "vital signs": its "pulse" (seismology), "temperature" (heat flow), and "reflexes" (precision tracking).

This mission is part of NASA's Discovery Program for highly focused science missions that ask critical questions in solar system science. - From the InSight website. 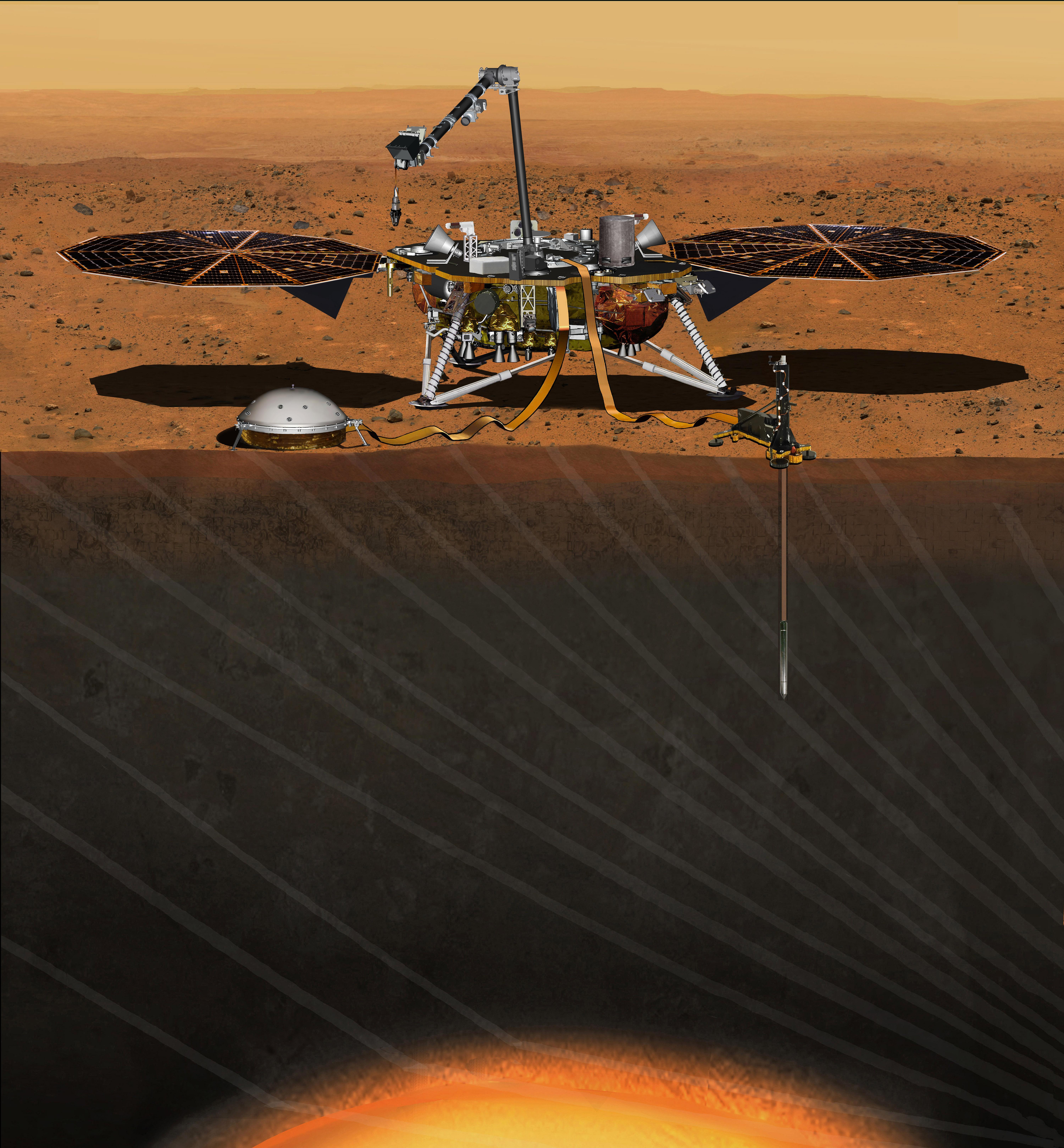 This artist's concept depicts the InSight lander on Mars after the lander's robotic arm has deployed a seismometer and a heat probe directly onto the ground. InSight is the first mission dedicated to investigating the deep interior of Mars. The findings will advance understanding of how all rocky planets, including Earth, formed and evolved. Credits: NASA/JPL-Caltech