Planets are splashed across the south-southeastern predawn sky all week. With each morning, Venus and Saturn spread a little farther apart - Saturn getting a little higher and moving to the south, and Venus moving towards the east.

Mercury can be seen very low in the western sky at dusk this week. Look quick! Mercury will only be visible for a couple days, and will get dimmer with each passing day.

For an observing challenge, try to spot Mercury and a very thin crescent Moon on March 7th at 6:46 PM!

Mars and Uranus are high in the west-southwestern sky before midnight; Mars will slowly move away from Uranus all month.

Mars and Uranus high in the west-southwestern sky before midnight on Mar. 5th. Mars moves away from Uranus, toward the Pleiades star cluster all month. Credit: Stellarium / Bob Trembley.

The Moon will appear very near Mars on Mar. 11th!

The Moon near Mars in the west-southwestern sky on Mar. 11th. Credit: Stellarium / Bob Trembley. 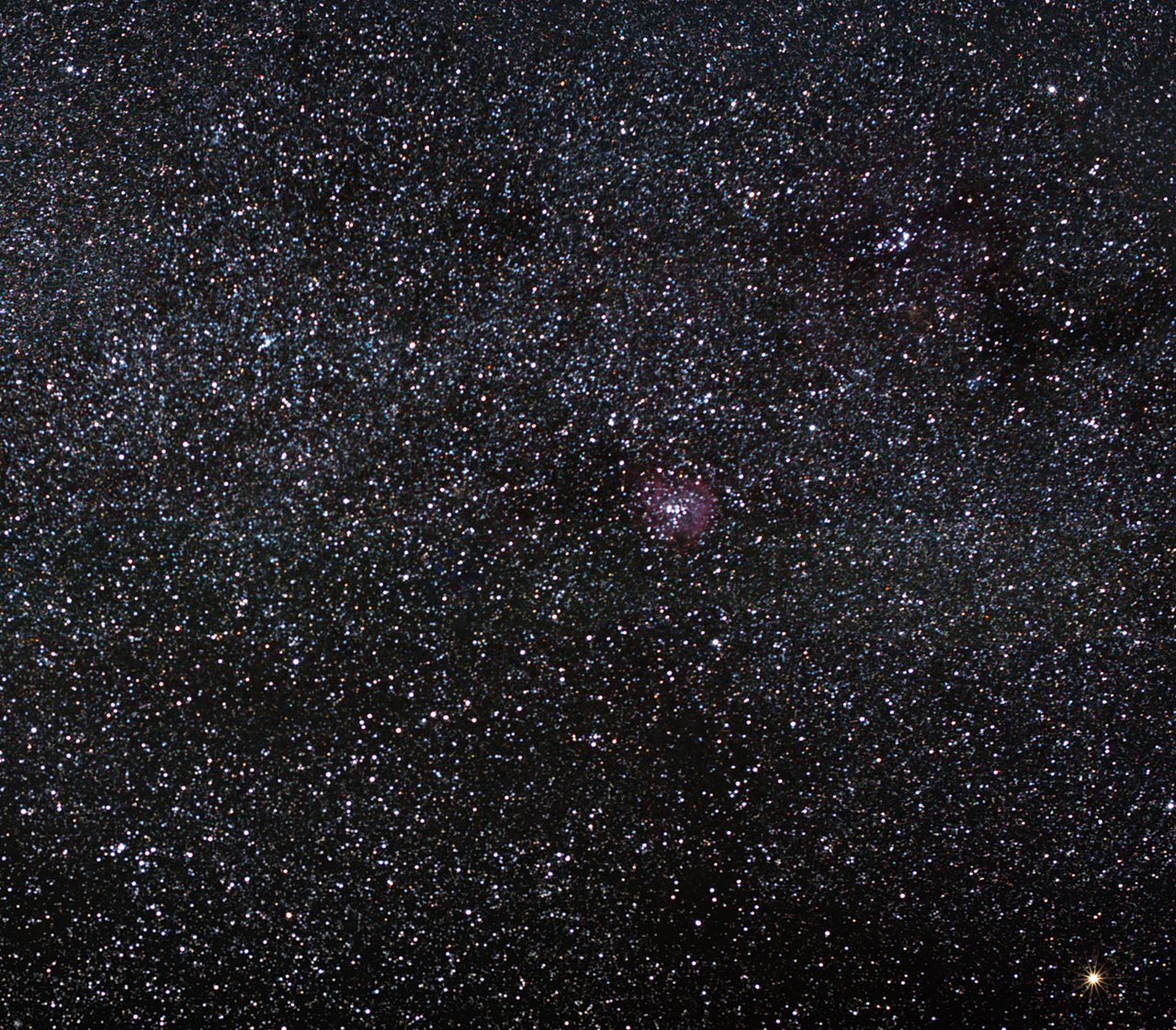 The spectacular Rosette Nebula, a glowing hydrogen-rich cloud, is located some 4,700 light-years away toward the constellation of Monoceros (the Unicorn).

In the middle of the nebula shines the open star cluster NGC 2244, full of massive young stars only about a million years old. The intense ultraviolet radiation produced by these newborn stars illuminates the surrounding belts of hydrogen, making the whole region glow red. Powerful stellar winds have carved a hole in the centre of the Rosette Nebula, allowing the young stars to peek out from their native environment. These vigorous winds also cause the compression of the interstellar medium, thus triggering dense clouds of gas to collapse under their own weight to form new stars. This star-forming process will continue over the next few million years as the nebula dissipates.

NGC 2244 is easily seen even with small telescopes, though the Rosette Nebula itself is more difficult to spot and requires telescopes with a larger diameter. The nebula measures over 100 light-years in diameter, and the total mass of the nebula is estimated to be around 10,000 solar masses. - ESO

A time-exposure through a much larger telescope reveals the Rosette Nebula being illuminated by radiation from hot young stars.

This infrared image from NASA's Spitzer Space Telescope shows the Rosette nebula, a pretty star-forming region more than 5,000 light-years away in the constellation Monoceros. In optical light, the nebula looks like a rosebud, or the "rosette" adornments that date back to antiquity.

But lurking inside this delicate cosmic rosebud are super hot stars, called O-stars, whose radiation and winds have collectively excavated layers of dust (green) and gas away, revealing the cavity of cooler dust (red). Some of the Rosette's O-stars can be seen in the bubble-like, red cavity; however, the largest two blue stars in this picture are in the foreground, and not in the nebula itself.

This image shows infrared light captured by Spitzer's infrared array camera. Light with wavelengths of 24 microns is red; light of 8 microns is green; and light of 4.5 microns is blue. - NASA

The Sun has been spot-free for 33 days; there is a small region of roiling activity in the northern hemisphere that looks like it wants to form into a sunspot. The coronal hole at the north pole seems to have closed, while the hole at the south pole remains wide open and large.

SpaceWeather.com says: "Earth is passing through a gap between solar wind streams. The next uptick in solar wind speed is expected on Mar. 7th when a minor hole in the sun's atmosphere moves into geoeffective position. Geomagnetic unrest on that date could spark Arctic auroras."

Light prominence activity for the past couple days - you can see several bright spots of activity develop near the equator in the video below.

Tadpole-like solar jets, spotted in data from our IRIS mission, add a new clue to an age-old mystery: Why the Sun's upper atmosphere, the corona, is some 200 times hotter than its visible surface. https://t.co/b3moF5HWvL pic.twitter.com/1DxQBv6h9K

In this diagram of the inner solar system, all of the fireball orbits from Mar. 02, 2019 intersect at a single point--Earth. The orbits are color-coded by velocity, from slow (red) to fast (blue).Source: Spaceweather.com

I'll see if I can get more info on this meteor over LA:

A new generation of space flight starts now with the arrival of @SpaceX’s Crew Dragon to the @Space_Station. Congratulations to all for this historic achievement getting us closer to flying American Astronauts on American rockets. #LaunchAmerica pic.twitter.com/QMOuE2ecwm

.@AstroAnnimal welcomes humans aboard the first @SpaceX #CrewDragon to visit the station and introduces two special guests, Ripley and Little Earth, ushering in the era of @Commercial_Crew. #LaunchAmerica pic.twitter.com/QqzEEgDWzt

Hiking at the north pole of Bennu would have pros and cons. The terrain is extremely rocky, but the asteroid's gravity is so slight you could jump over the boulders (if you took care not to launch yourself into space). This image comes from @OSIRISREx https://t.co/ZM1RvWvHzH pic.twitter.com/AhkbJKaBNX

InSight's rockhammer is about half a meter down and has already run into rocks. - https://t.co/nMihSKK0Je pic.twitter.com/5aSWoi5xq4

Who’s got one arm, a rock-zapping laser and is back to science operations? THIS ROVER! https://t.co/r7e2GVqS4J pic.twitter.com/fuXxfmmyRY

Attention, educators: Not always on social media and still want to keep up with climate change from NASA's perspective? Subscribe to our monthly newsletter. https://t.co/DPuZiTxRAH

My wife is teaching her students about #PlasticPollution - it's a BIG problem! Because of this, we've begun to eschew single-use plastic.

A plastic bag near the bottom of the Marianas Trench is just one of many bits of garbage that foul even the most remote points beneath the Earth’s seas, Japanese scientists recently revealed. https://t.co/taxkVN8bXp

Aurora in the atmosphere of a moon orbiting a gas giant planet in the Large Megallantic Cloud - looking back at the Milky Way Galaxy. Credit: Space Engine / Bob Trembley.