Mars continues to dim in the west-northwestern sky after sunset, and Mercury appears low near the horizon all week. A thin crescent Moon appears near Mars on June 5th, and moves towards the south each day.

The Moon appears by the star Regulus on June 7th and 8th.

Saturn, Jupiter and the star Antares have been slowly crawling across the southern sky for several weeks; Antares sets a bit earlier each morning.

Venus appears very low on the horizon just before sunrise all week. 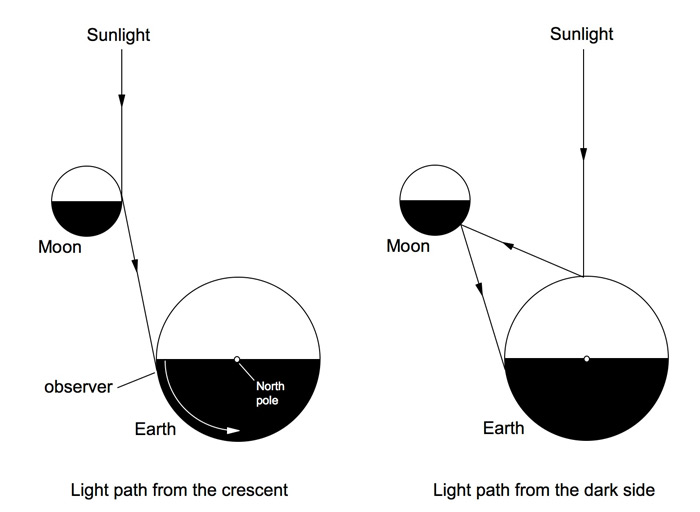 Earthshine is visible earthlight reflected from the Moon's night side. It is also known as the Moon's ashen glow or as "the new Moon with the old Moon in her arm."

Earthshine is most readily visible from a few nights before until a few nights after a new moon, during the (waxing or waning) crescent phase. - Wikipedia

The next few days will be the ideal time to try and catch a glimpse of Earthshine!

The Moon is a waxing crescent,visible toward the southwest in early evening.

The first quarter Moon occurs on June 10th, it will be visible high in the southern sky in early evening.

50 years ago, NASA was preparing to land humans on the Moon. Now, we’re getting ready to return by 2024. In honor of the #Apollo50th anniversary, we’re making a playlist fit for a lunar journey with @ThirdRockRadio. Til June 28, share a song you’d include with #NASAMoonTunes! pic.twitter.com/FXxHsz5Hjj

We’re 46 days away from our #Apollo50th anniversary, when humans walked on another world for the first time in history! As we continue our plans to send the first woman and next man to the Moon in five years, take a look back at our @NASAMoon missions: https://t.co/zbc7e81zq9 pic.twitter.com/NjKWMahD1z

The Sun has been spot-free for 16 days... but something with a lot of coronal loop activity is rotating into view; there's no sunspot under all that activity, yet, but there is a faint plage. Coronal holes continue to remain open at both poles; you can watch one open up near the equator in the video below:

SpaceWeather.com says: "SOLAR MINIMUM CONDITIONS ARE IN EFFECT: The sun has been without spots for 16 consecutive days--a sign that Solar Minimum is underway. Many people think Solar Minimum is uninteresting. Not so. This phase of the solar cycle brings extra cosmic rays, long-lasting holes in the sun's atmosphere, and a possible surplus of noctilucent clouds."

Get involved in space science—help @OSIRISREx choose a sample site at asteroid Bennu!

Find the best place on asteroid Bennu to collect a sample for return to Earth for study by going to https://t.co/IJngymw7FY pic.twitter.com/QL7gldXBHQ

Position of the planets and a couple spacecraft in the inner solar system, June 4, 2019. Credit: NASA Eyes on the Solar System / Bob Trembley.

Position of the planets in the middle solar system, June 4, 2019. Credit: NASA Eyes on the Solar System / Bob Trembley.

Position of the planets in the outer solar system, June 4, 2019. Credit: NASA Eyes on the Solar System / Bob Trembley.

Imagine how many more moons we'd discover if we had orbiters for Uranus and Neptune!

Jupiter at opposition: the Earth will be between Jupiter and the Sun on June 10th.

This is the edge of a large crater in Bennu's southern hemisphere that holds several spots which may work for sample collection. The image was taken on April 11 during Flyby 6A. The square rock on the edge is 20 ft (6.0 m) long ... about the length of a 15 passenger van.

The Parker Solar Probe will reach aphelion #2 on June 18th.

The Southern and Central United States have been drenched by rainstorms in the spring of 2019, leading to widespread flooding. https://t.co/YlPawYc0Nt #NASA #Landsat #MODIS pic.twitter.com/0EwwTOKFPg

More than a trillion new measurements of Earth’s height – blanketing everything from glaciers in Greenland, to mangrove forests in Florida, to sea ice surrounding Antarctica – are now available to the public. https://t.co/P9uYVdax9i

Astronomers have found an exoplanet so rare that they have deemed it "The Forbidden Planet," according to a new study. https://t.co/D90683V6Sm

I created the star NGTS-4 and exoplanet NGTS-4b in Universe Sandbox, and let the simulation run - this is what I got:

A Big Day for Physics | Update 22.3 of Universe Sandbox is now available! This officially switches to our faster, more stable, & more accurate physics system. + a sim celebrating the 100-year anniversary of the eclipse that validated Einstein’s GR theory https://t.co/7RscKG5DLR pic.twitter.com/XhjWx9qDoe

NASA Eyes on the Solar System: an immersive 3D solar system and space mission simulator - free for the PC /MAC. I maintain the unofficial NASA Eyes Facebook page.
Stellarium: a free open source planetarium app for PC/MAC/Linux. It's a great tool for planning observing sessions.
Universe Sandbox: a space simulator that merges real-time gravity, climate, collision, and material interactions to reveal the beauty of our universe and the fragility of our planet. Includes VR support.
SpaceEngine: a free 3D Universe Simulator for Windows. Steam version with VR support coming soon!