Mars continues to move eastward away from Saturn and Jupiter in the southern predawn sky.

The Moon appears near the star Spica the southern sky at 11:00 PM on June 2nd.

The Moon appears near the star Spica on June 2nd in the southern sky at 11:00 PM. Credit: Stellarium / Bob Trembley.

The Moon appears near the star Antares in the southeastern sky at 11:00 PM on June 4th and 5th.

The Moon appears near the star Antares in the southeastern sky at 11:00 PM on June 4th. Credit: Stellarium / Bob Trembley.

The Moon appears near the star Antares in the southeastern sky at 11:00 PM on June 5th. Credit: Stellarium / Bob Trembley.

The full Moon occurs on June 5th - rising at sunset, visible high in the sky around midnight, and visible all night.

After June 5th, the Moon will be a waning gibbous - rising after sunset, visible high in the sky after midnight, and visible to the southwest after sunrise.

What looks like a dried river bed is actually a lava channel, carved out of the Moon's surface long ago by flowing lava. 🌋 These channels, called sinuous rilles, are a common landform on the Moon. https://t.co/oUqfenqlyn pic.twitter.com/pe3tyzKBdR

We have a spot! Sunspot AR2764 is a member of new Solar Cycle 25. The northern coronal hole appears to have opened up a bit since last week, while the southern hole remains open and large.

More, beautiful, swirling prominences on the Sun's limb over the last few days!

Atira #asteroids are asteroids whose orbits are entirely confined within Earth's orbit but do not cross paths with our planet. They extremely rare with only 22 known examples. Congratulations to @Catalina_sky survey and Greg Leonard for spotting a newest one! #planetarydefense https://t.co/K9di8G0ozU 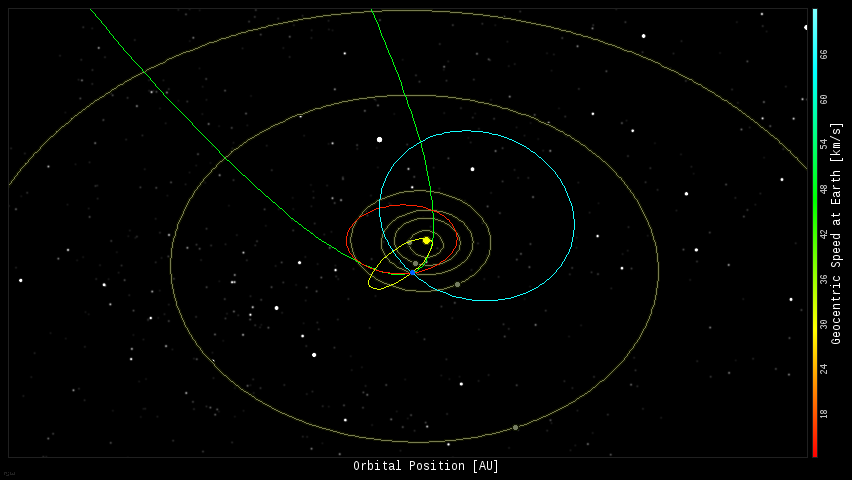 Position of the planets and a couple spacecraft in the inner solar system, 2020-06-02 - the orbit of asteroid Eros is highlighted.. Credit: NASA Eyes on the Solar System / Bob Trembley.

Position of the planets in the middle solar system, 2020-06-02. Credit: NASA Eyes on the Solar System / Bob Trembley.

Position of the planets in the outer solar system on 2020-06-02 - the orbit of dwarf planet Eris is highlighted. Credit: NASA Eyes on the Solar System / Bob Trembley.

Every 19 months, Venus passes between the Sun and the Earth. And every 8 years, Venus looks particularly close to the Sun.

This image was taken this morning, Venus was only 2,4° from the Sun. All we can see is its thin atmosphere that scatters light and gives this shape of ring. pic.twitter.com/HOEvHXFnxB

As of today the @ESA/@NASASun SOHO satellite has discovered 3,979 new comets via the Sungrazer Project. We're now 21 comets away from FOUR THOUSAND discoveries! 😱🤯☄️

A huge win for #CitizenScience and all the volunteers that @DoNASAScience from the comfort & safety of home!👏 pic.twitter.com/AA4fa3y9Xo

Scientists are gaining a new understanding of asteroid Bennu’s memorable “spinning top” shape and where it comes from.

Falcon 9 lifts off from historic Launch Complex 39A and sends Crew Dragon to orbit on its first flight with @NASA astronauts to the @space_station pic.twitter.com/UOoaKiQaFk

In our excitement for today's launch, and after seeing the @NASA astronaut's sweet suits, we made our own concept! Who wants to see this in the game? #LaunchAmerica @SpaceX pic.twitter.com/eJW46azhyY

At the heart of our Milky Way galaxy is a supermassive black hole.

About 3.5 million years ago, it unleashed a burst of energy that our very distant hominid ancestors likely saw as ghostly light overhead. Hubble is uncovering clues about this explosion: https://t.co/kSEB8wdbwH pic.twitter.com/WQg7cKuu2B

Seven of the regions that dominate global ice mass losses (such as the Southern Andes and High Mountain Asia) are melting at an accelerated rate, depleting freshwater resources that millions of people depend on and adding to sea level rise. https://t.co/tJ4ptv0jDA

Do you know an advocate who deserves recognition for their work protecting the night from #lightpollution? Nominate them today for the 2020 @IDADarkSky Awards! We would love to recognize their commitment to the #darksky movement.

Continuing with my visual tour of nearby stars and their systems, we travel to the Epsilon Indi star system, about 12 light years distant.

Distance to Epsilon Indi from Sol; the plane (green) is aligned with the orientation of the plane of the Milky Way galaxy. Credit: SpaceEngine / Bob Trembley.

Epsilon Indi (ε Indi, ε Ind) is a star system approximately 12 light-years from Earth in the constellation of Indus consisting of a K-type main-sequence star, ε Indi A, and two brown dwarfs, ε Indi Ba and ε Indi Bb, in a wide orbit around it. The brown dwarfs were discovered in 2003. ε Indi Ba is an early T dwarf (T1) and ε Indi Bb a late T dwarf (T6) separated by 0.6 arcseconds, with a projected distance of 1460 AU from their primary star.

ε Indi A has one known planet, ε Indi Ab, with a mass of 3.3 Jupiter masses in a nearly circular orbit with a period of about 45 years. ε Indi Ab is the closest Jovian exoplanet. The ε Indi system provides a benchmark case for the study of the formation of gas giants and brown dwarfs. - Wikipedia

Top-down view of the orbits of the stars in the Epsilon Indi star system - the system barycenter is highlighted in red. Credit: SpaceEngine / Bob Trembley.

Oblique view of the orbits of the star Epsilon Indi A and its exoplanet - the barycenter for both A & B is shown as the blue diamond. Credit: SpaceEngine / Bob Trembley.

Top-down view of the orbits of the brown dwarfs in the Epsilon Indi B sub-system - the system barycenter is highlighted in red. Credit: SpaceEngine / Bob Trembley.