The Moon appears near Jupiter and Saturn in the southeastern sky at 10:00 PM from July 31st - Aug. 2nd.

Mars continues to appear high in the southeastern predawn sky this week.

Venus appears high above the eastern horizon, and Mercury appears very low above the horizon all week; Hurry if you want to see Mercury, it gets closer towards the horizon with each morning.

The first quarter Moon occurred on July 27th - the Moon is currently a waxing gibbous - visible to the southeast in early evening, and up for most of the night.

The full Moon occurs on August 3rd - rising at sunset, visible high in the sky around midnight, and visible all night.

This is NASA's Lunar Gateway — an international research outpost set to orbit the Moon in 2023.

Vital for sustainable, long term human presence on the lunar surface, as well as a staging point for deep #space exploration. pic.twitter.com/HuJJO69xpp

The Sun has a couple spots! One from last, week and a new spot emerging on the Sun's limb.

Several small and long-lived prominences; the region to the upper left where the new sunspot is rotating into view is showing a LOT of coronal activity.

.@NJIT & @NASA data gave scientists a new look at the central engine of a solar flare. Combined with @CenterforAstro simulations, the data revealed more about the magnetic fields & energetic particles at the heart of such solar explosions. More from NJIT: https://t.co/vUsjsK473z pic.twitter.com/jjo2SVX08r 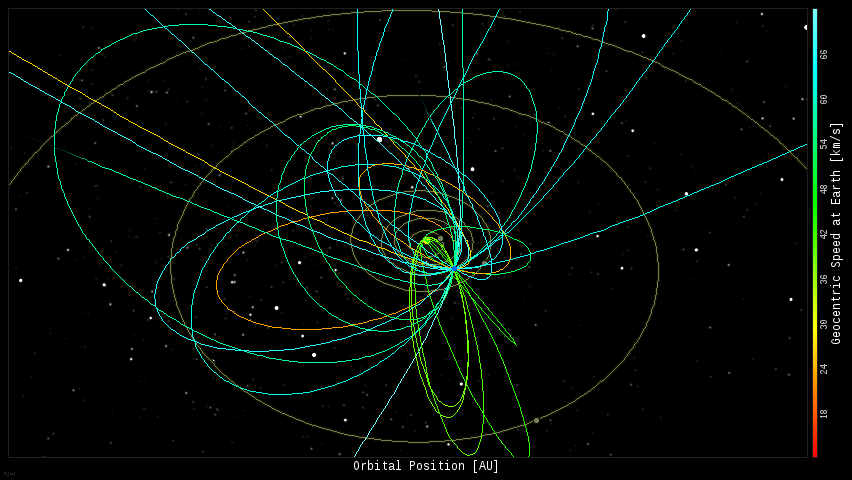 Whoa! Check out this awesome #meteor that my all-sky camera nabbed over Jozi last night!

(I’ll share the time-lapse video from the cam later, maybe. Some clouds came through and made it look cool.) pic.twitter.com/cJSamiXFaM

Position of the planets and a couple spacecraft in the inner solar system, 2020-07-28. Credit: NASA Eyes on the Solar System / Bob Trembley.

Position of the planets in the middle solar system, 2020-07-28. Credit: NASA Eyes on the Solar System / Bob Trembley.

Position of the planets in the outer solar system, 2020-07-28 - the orbit of the Great Comet of 1811 is highlighted. Credit: SpaceEngine / Bob Trembley.

The planet Uranus taken by the Voyager 2 spacecraft in 1986. Credit: NASA/JPL-Caltech

Uranus is the seventh planet from the Sun. The name "Uranus" is a reference to the Greek god of the sky, Uranus. According to Greek mythology, Uranus was the grandfather of Zeus (Jupiter) and father of Cronus (Saturn). It has the third-largest planetary radius and fourth-largest planetary mass in the Solar System. Uranus is similar in composition to Neptune, and both have bulk chemical compositions which differ from that of the larger gas giants Jupiter and Saturn. For this reason, scientists often classify Uranus and Neptune as "ice giants" to distinguish them from the gas giants. Uranus' atmosphere is similar to Jupiter's and Saturn's in its primary composition of hydrogen and helium, but it contains more "ices" such as water, ammonia, and methane, along with traces of other hydrocarbons. It has the coldest planetary atmosphere in the Solar System, with a minimum temperature of 49 K (−224 °C; −371 °F), and has a complex, layered cloud structure with water thought to make up the lowest clouds and methane the uppermost layer of clouds. The interior of Uranus is mainly composed of ices and rock.

Like the other giant planets, Uranus has a ring system, a magnetosphere, and numerous moons. The Uranian system has a unique configuration because its axis of rotation is tilted sideways, nearly into the plane of its solar orbit. Its north and south poles, therefore, lie where most other planets have their equators. In 1986, images from Voyager 2 showed Uranus as an almost featureless planet in visible light, without the cloud bands or storms associated with the other giant planets. Voyager 2 remains the only spacecraft to visit the planet. Observations from Earth have shown seasonal change and increased weather activity as Uranus approached its equinox in 2007. Wind speeds can reach 250 metres per second (900 km/h; 560 mph).  - Wikipedia

There is an lot more about Uranus in this Wikipedia article.

Uranus has 27 known natural satellites. The names of these satellites are chosen from characters in the works of Shakespeare and Alexander Pope. The five main satellites are Miranda, Ariel, Umbriel, Titania, and Oberon. The Uranian satellite system is the least massive among those of the giant planets; the combined mass of the five major satellites would be less than half that of Triton (largest moon of Neptune) alone. The largest of Uranus' satellites, Titania, has a radius of only 788.9 km (490.2 mi), or less than half that of the Moon, but slightly more than Rhea, the second-largest satellite of Saturn, making Titania the eighth-largest moon in the Solar System. Uranus' satellites have relatively low albedos; ranging from 0.20 for Umbriel to 0.35 for Ariel (in green light). They are ice–rock conglomerates composed of roughly 50% ice and 50% rock. The ice may include ammonia and carbon dioxide.. - Wikipedia

Ugly Stepchild of the Solar System?

Voyager 2 is the only spacecraft to have visited the planet Uranus (and Neptune) - and that was DECADES ago! Each time NASA's Decadal Survey comes out, I'm disappointed that once again, there are no missions planned for the ice giants... It's almost as if those two planets are the ugly stepchildren of the solar system, or maybe there's some vast alien conspiracy to prevent spacecraft from being sent there, lest their secret base be discovered! But that's just crazy talk... right?

An interesting history of the discovery of the planet Uranus:

One week until the first astronauts to launch from America since 2011 return to Earth! 🚀👨‍🚀 Here’s what to watch in the days leading up to splashdown on August 2... https://t.co/MwJdx6dhJJ pic.twitter.com/xtjQEH3zF2

The Exp 63 crew focused on robotic assistants and biomedicine today while preparing for two crew members to depart this weekend. More... https://t.co/2qlrVsM2ua pic.twitter.com/rzm4Oi3RaN

I’m helping to pave the way for future human missions to Mars. Learn more about @NASA’s plans for human exploration at 1 pm PT (4pm ET/2000 UTC) on July 28 at https://t.co/yoYs5YcZqr. Use #CountdownToMars to ask your questions. pic.twitter.com/Nn46IMfL7Z

Continuing with my visual tour of nearby stars and their systems, we travel to Lacaille 8760 (AX Microscopii), 12.9 light years distant.

Distance to Lacaille 8760 (AX Microscopii) from Sol; the plane (green) is aligned with the orientation of the plane of the Milky Way galaxy. Credit: SpaceEngine / Bob Trembley.

Lacaille 8760 (AX Microscopii) is a red dwarf star in the constellation Microscopium. It is one of the nearest stars to the Sun at about 12.9 light-years' distance, and the brightest M dwarf star in Earth's night sky, although it is generally too faint to be seen without a telescope. At an apparent magnitude of +6.7, it may only be visible to the unaided eye under exceptionally good viewing conditions, under dark skies. It was originally listed in a 1763 catalog that was published posthumously by the French Abbé Nicolas Louis de Lacaille. He observed it in the southern sky while working from an observatory at the Cape of Good Hope.

In the past Lacaille 8760 has been classified anywhere from spectral class K7 down to M2. In 1979 the Irish astronomer Patrick Byrne discovered that it is a flare star, and it was given the variable star designation AX Microscopii. As a flare star it is relatively quiet, only erupting on average less than once per day.

Despite efforts by astronomers, as of 2011 no planets had been detected in orbit around this star.

Lacaille 8760 is one of the largest and brightest red dwarfs known, with about 60% the mass and 51% the radius of the Sun. - Wikipedia

When I went to the Lacaille 8760 system in SpaceEngine, there was an extensive system of procedurally generated planets, satellites - and even a comet! For systems that currently do NOT have any confirmed exoplanets (like this one), SpaceEngine takes a bit of liberty and may create a planetary system appropriate for that type of star - this is one of those cases.

Artistic rendering of Lacaille 8760 seen from above the surface of a hypothetical exoplanet. Credit: SpaceEngine / Bob Trembley.