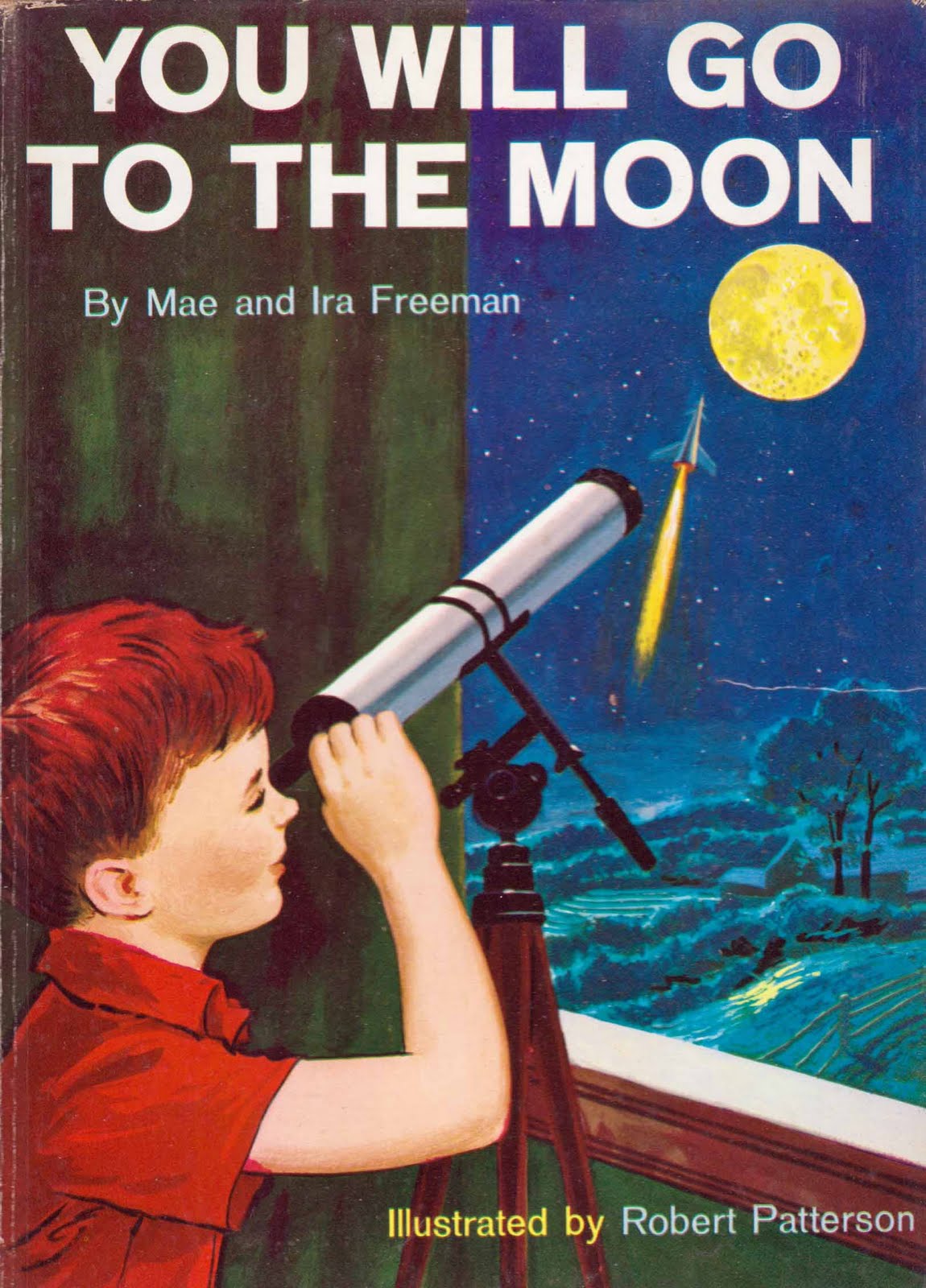 Cover of "You will go to the Moon" from 1959. Credit: Robert Patterson / Random House

My wife and I are packing up our home of 22 years, and will be moving a few miles north. While I was clearing out my bookshelf, I found a book that I owned as a child, that has somehow remained with me, albeit a bit worse for wear: You Will Go To the Moon, published in 1959 by Mae and Ira Freeman, illustrated by Robert Patterson.

I was a child of the Apollo era, and like many others of that time, our lives where influenced-by, and in many cases shaped-by the events of the early space age. As I look at through the book now, many of the images are very reminiscent of Chesley Bonestell's artwork - also something from my childhood. This book shows a Moon lander leaving from a toroidal space station - something Bonestell featured in many pieces of his art way before 2001: A Space Odyssey; there's also a whimsical image of an adult and child, both in spacesuits, jumping off the Moon's surface!

60 years after that children's book was published, and 50 years after having landed on the Moon, we still don't have cool toroidal space stations, or children on the Moon. But with the China National Space Agency recently landing 2 rovers on the Moon, and NASA's announcement of plans to send the first woman to the Moon by 2024, I am hopeful that maybe my grandchildren may be the ones to finally "Go To the Moon" and stay. In the meantime, I'll have to be satisfied with going there myself in Kerbal Space Program!

You can view You Will Go To the Moon here [Link]

The above is an edited version of the intro of my Outreach Officer's Report for the July 2019 issue of the Warren Astronomical Society's monthly newsletter.

Saturn rises shortly after sunset, and Jupiter is high in the southern sky - making for great observing targets this week.

Saturn rises later each evening; Jupiter is high in the southeastern sky around midnight all week. Credit: Stellarium / Bob Trembley.

If you are up early in the morning, Saturn will be high in the southern sky at 3:00 AM.

Saturn high in the southeastern sky around 3:00 AM all week. Credit: Stellarium / Bob Trembley.

Venus appears very low, and lower each day, in the northeastern sky just before sunrise.

The crescent Moon appear near the star Regulus on July 5th after sunset.

The Moon appears very near the star Regulus in the western sky after sunset on July 5, 2019. Credit: Stellarium / Bob Trembley.

The constellation Cassiopeia appears in the North-northeastern sky after sunset all week.

The constellation Cassiopeia in the North-northeastern sky after sunset. This week's observing target is in Cassiopeia. Credit: Stellarium / Bob Trembley.

NGC 436 - an Open Cluster in Cassiopeia NGC 436 is an open cluster located in the constellation Cassiopeia. It was discovered on November 3, 1787 by William Herschel. It was described by Dreyer as a "cluster, small, irregular figure, pretty compressed. - Wikipedia

I found the image here:

The Moon is a waning crescent, rising around midnight, visible low to the east before sunrise.

After July 2nd the Moon will be a waxing crescent, visible toward the southwest in early evening; this weekend the Moon should be an excellent for early evening observing.

I frequently mention how I love seeing the waning crescent Moon through my kitchen window in the early morning - I captured this shot of it on June 26th.

I love seeing the waning crescent #Moon early in the morning through my kitchen window! If there are no clouds, I get to see this a couple days a month - this morning was one of them.

Taken at 4:15 AM with my Nikon Coolpix B500 camera, balanced on top of my car, zoomed WAY in! pic.twitter.com/jMHkqGCheu

What's up for July? Learn how to spot the Apollo 11 landing site, all about @NASA's plans to return to the Moon and five more lunar fast facts, just in time for #Apollo50th.

The Sun has been spot-free for 4 days now. Coronal holes continue to appear at both poles, and a large hole appears along the Sun's equator.

SpaceWeather.com says: "A SUNSPOT FROM THE NEXT SOLAR CYCLE: Solar Minimum won't last forever. In fact, the next solar cycle made a brief appearance this week. On July 1st, a small sunspot materialized in the sun's southern hemisphere (S21W02), then, hours later, vanished again. The polarity of its magnetic field marks it as a likely member of Solar Cycle 25."

Some long-lived prominences appear all over the Sun's limb for the last couple days.

Dozens of #AsteroidDay events where held across the globe:

This Tweet by NASA discusses the Shoemaker-Levy 9 comet impact on Jupiter in 1994, and the formation of NASA's Planetary Defense Coordination Office (PDCO). David Levy, one of the co-discovers of that comet writes a monthly post that we are honored to re-post here on the Sacred Space Astronomy blog.

25 years ago, humanity had its first glimpse of a cosmic collision when comet Shoemaker-Levy 9 crashed into Jupiter. It was a wake-up call… Today on #AsteroidDay, we have our eyes to the sky detecting and tracking potentially hazardous objects. Details: https://t.co/aWZDnpKNba pic.twitter.com/NECflN6ews

Position of the planets and a couple spacecraft in the inner solar system, July 2, 2019. Credit: NASA Eyes on the Solar System / Bob Trembley.

Position of the planets and a couple dwarf planets in the middle solar system, July 2, 2019. Credit: NASA Eyes on the Solar System / Bob Trembley.

Position of the planets and a couple dwarf planets in the outer solar system, July 2, 2019. Credit: NASA Eyes on the Solar System / Bob Trembley.

Well kinda... I bet YOUR quad-copter doesn't have a multi-mission radioisotope thermoelectric generator (MMRTG), and a neutron-activated gamma-ray spectrometer!

BIG NEWS: The next @NASASolarSystem mission is… #Dragonfly – a rotorcraft lander mission to Saturn’s largest moon Titan. This ocean world is the only moon in our solar system with a dense atmosphere & we’re so excited to see what Dragonfly discovers: https://t.co/whePqbuGBq pic.twitter.com/BQdMhSZfgP This is a view of Bennu’s far north that has two craters with possibly sampleable material (center and center left).

(Does anyone recognize the center crater from a couple of weeks ago? It was a much closer view of the site.)

#NASASocial All about the Deep Space Atomic Clock: https://t.co/nWg1Y0fxhn

It’s been 10 years since we took our first picture with LROC. I wrote this post for the 5th anniversary. I do grow attached to some of these milestones

In Part 1, we examined some ways Earth’s natural & human systems are sensitive to a warming climate. In Part 2, we’ll highlight some of the specific ways a UN-sponsored report projects our planet may change with another 1/2 or full degree C of warming. https://t.co/86gmxVPlK7

Kepler-903 b weighs in at 4.7 Earth-masses. It orbits its host G4-class star in a mere 10.4 days. It was discovered using the transit method, and its discovery was announced in 2016. When I went to this "hot subneptune" exoplanet in SpaceEngine, it was glowing red hot at 531°C.

Because of Eta Carinae's violent history, astronomers have kept watch over its activities. Although Hubble has monitored the volatile superstar for 25 years, it still is uncovering new revelations: https://t.co/PgYHzEqulC pic.twitter.com/YxU6xKpydR

Imagine slow-motion fireworks that started exploding nearly two centuries ago and haven't stopped since then. This is how you might describe this Hubble photo https://t.co/rEXm2qYYFw pic.twitter.com/iiITMgXC9L

Doug Bock is an astrophotographer friend from the Warren Astronomical Society.

NASA Eyes on the Solar System: an immersive 3D solar system and space mission simulator - free for the PC /MAC. I maintain the unofficial NASA Eyes Facebook page.
Stellarium: a free open source planetarium app for PC/MAC/Linux. It's a great tool for planning observing sessions.
Universe Sandbox: a space simulator that merges real-time gravity, climate, collision, and material interactions to reveal the beauty of our universe and the fragility of our planet. Includes VR support.
SpaceEngine: a free 3D Universe Simulator for Windows. Steam version with VR support is available now!