As Mars opposition nears, the planet shines bright in the southwestern sky before sunrise. I find myself looking out my back window for Mars every morning after I awake.

The waxing crescent Moon joins Venus in the western sky near sunset; Jupiter appears more to the south, and is a great observing target for several hours after sunset.

The Moon will travel across the southern sky all week; the first quarter Moon will appear close to Jupiter in the south-southwestern sky on July 20th.

The waxing gibbous Moon will appear very close to Saturn in the south-southeastern sky on July 24th.

M31 through a small telescope in an urban area. Credit: Richard Arendt.

In a small telescope M31's core is visible as a bright fuzzy oval - brighter toward the center, and fading out towards the edges. Under light-polluted skies, M31 resembles a globular cluster.

Time-exposures through large telescopes show M31 to be a beautiful, and slightly lop-sided spiral, with multiple dust lanes, and two smaller companion galaxies. 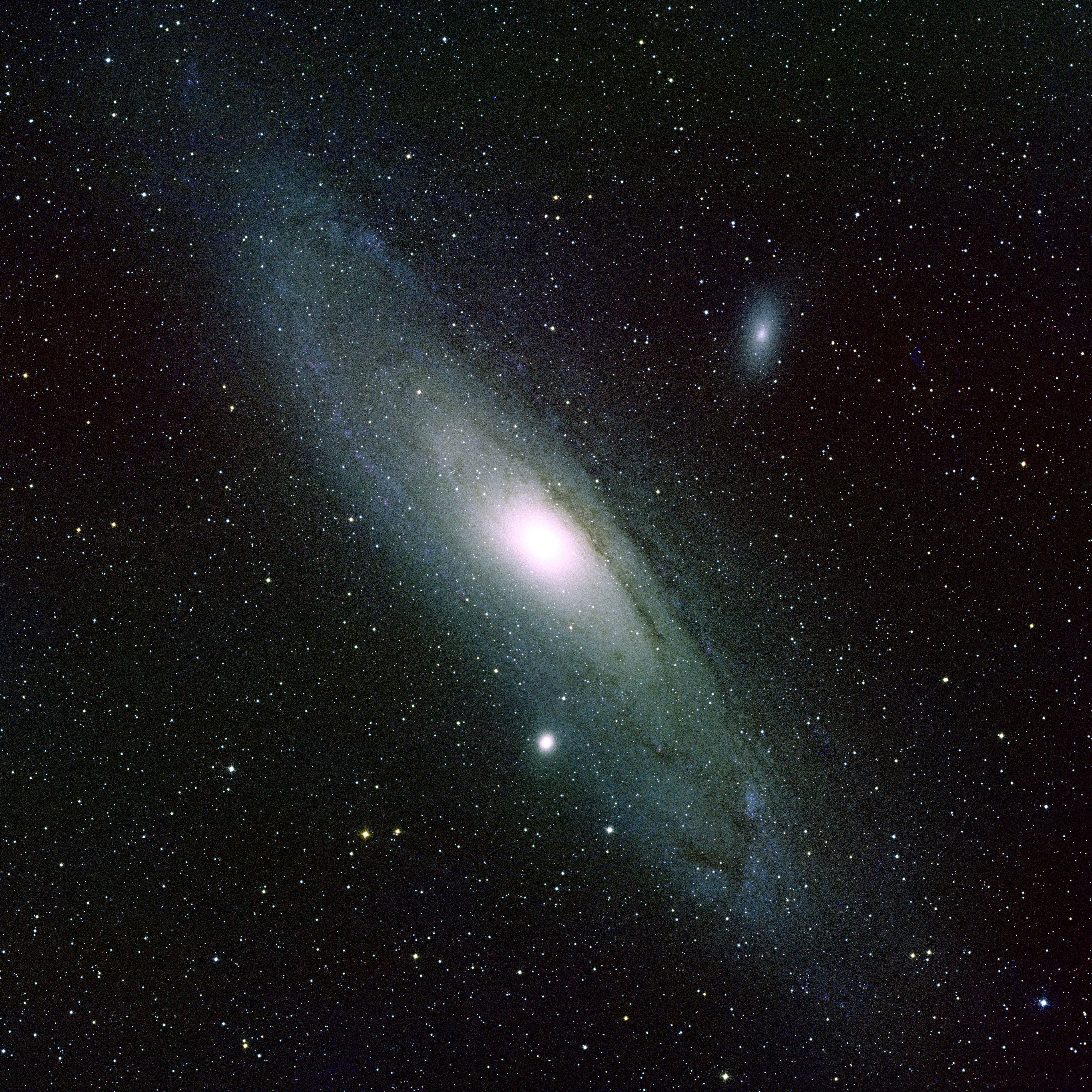 Using the Hubble space telescope, M31 reveals itself to be an immense sea of stars. You can click on the image below and zoom WAY in and resolve individual stars. Disclaimer: The author and the VOF cannot be held responsible for lost time or productivity by viewers getting completely lost within this image.

M31 and our Milky Way galaxy are on a collision course with each other - eventually merging into an even larger elliptical galaxy. But worry not... by the time this happens, our Sun will likely be near the end of its life-cycle... not that that's any comfort... OK, we're talking 4 billion years or more from now! As a bonus tho, the sky will look amazing as the two galaxies merge, and starbirth regions galore span the heavens! 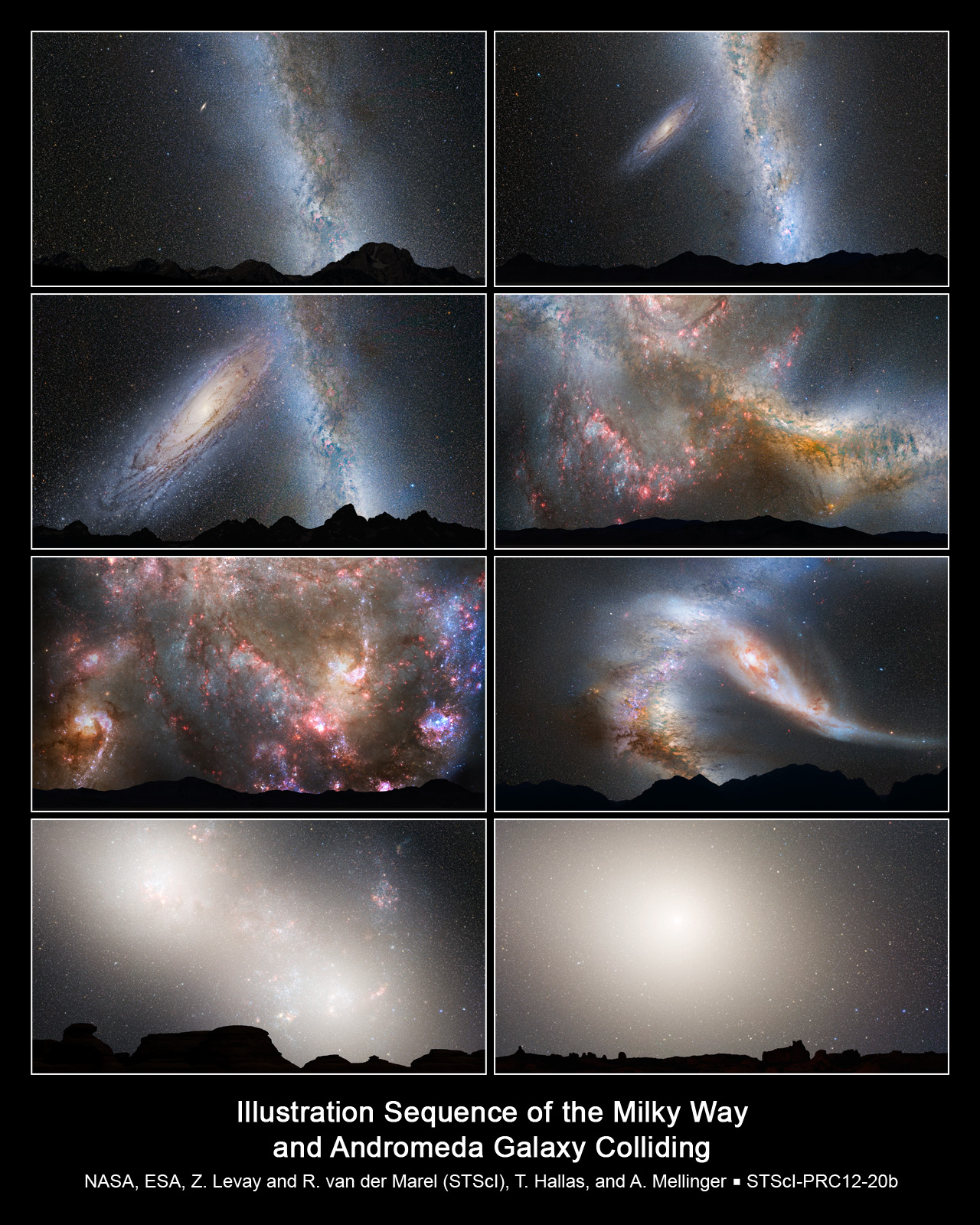 From several million light years distance, the merger of Andromeda and the Milky Way might look very much like "The Mice" - with tails of stars being flung off into intergalactic space. 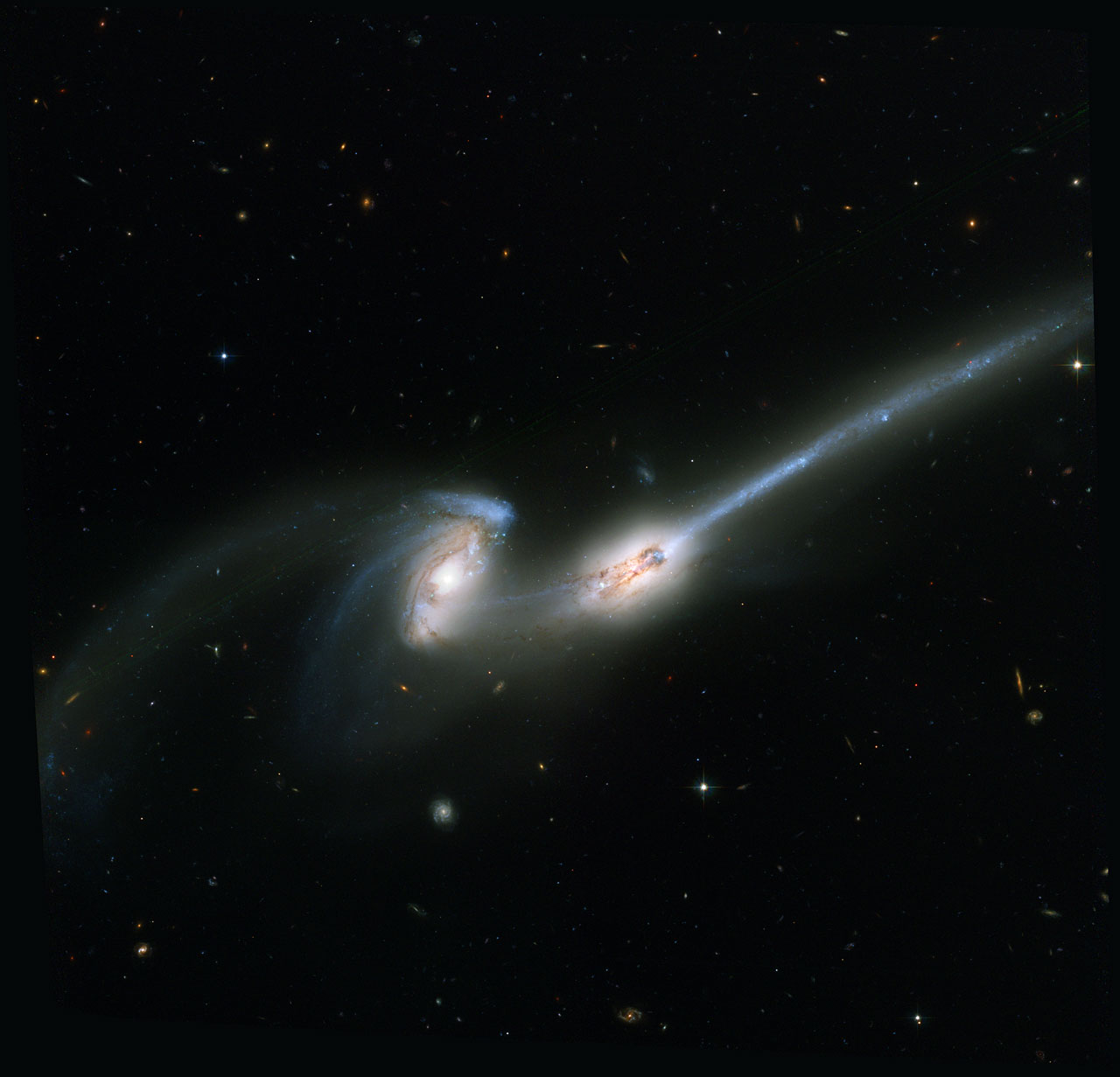 NASA's Hubble Space Telescope, has captured a spectacular pair of galaxies engaged in a celestial dance of cat and mouse or, in this case, mouse and mouse. Located 300 million light-years away in the constellation Coma Berenices, the colliding galaxies have been nicknamed "The Mice" because of the long tails of stars and gas emanating from each galaxy. Otherwise known as NGC 4676, the pair will eventually merge into a single giant galaxy. The Hubble image shows the most detail and the most stars that have ever been seen in these galaxies. In one galaxy a bright blue patch is resolved into a vigorous cascade of clusters and associations of young, hot blue stars, whose formation has been triggered by the tidal forces of the gravitational interaction. Streams of material can also be seen flowing between the two galaxies. Credit: NASA, H. Ford (JHU), G. Illingworth (UCSC/LO), M.Clampin (STScI), G. Hartig (STScI), the ACS Science Team, and ESA

The Sun as been spot-free for 20 days. The large coronal hole, seen for the last 2 weeks, remains at the Sun's north pole. The active region I mentioned last week continues to rotate along the equator, sporting some impressive coronal loops!

In fact, the coronal loops are so impressive, here's a close-up!

Close up of solar coronal loops 7-17-2018. Image courtesy of NASA/SDO and the AIA, EVE, and HMI science teams.

SpaceWeather.com says: "The sun is without spots for the 20th straight day. To find an equal stretch of blank suns, you have to go all the way back to September of 2009 when the sun was emerging from the deepest solar minimum in a century. The current stretch of spotlessness is a sign that the sun is entering another solar minimum, possibly as deep as the last one." The solar wind speed is 437.4 km/sec, with a density of 5.5 protons/cm3.

Prominences have been small with a medium abound of activity for the last couple days. If you look closely a the bright active region at the equator, you can see lines of plasma jumping back and forth; it's surprising this didn't develop into a sunspot.

Position of the planets in the inner solar system, July 17, 2018. Credit: NASA Eyes on the Solar System / Bob Trembley.

Close-up of the Sun, Earth and Mars, July 17, 2018 - as the Earth nears Mars Opposition. Credit: NASA Eyes on the Solar System / Bob Trembley.

"Gliese 504 b (often shortened to GJ 504 b) is a Jovian planet or a brown dwarf in the system of the solar analog 59 Virginis (GJ 504), discovered by direct imaging using HiCIAO instrument and AO188 adaptive optics system on the 8.2-meter Subaru Telescope of Mauna Kea Observatory, Hawaii by Kuzuhara et al. Visually, GJ 504 b would have a magenta color." ~Wikipedia

Visualization of exoplanet GJ 504 b is a Jovian planet or a brown dwarf in the system of the solar analog 59 Virginis (GJ 504). Credit: NASA Eyes on the Solar System / Bob Trembley.