A thin crescent Moon will appear low in the southwestern sky at dusk on Jan. 8th.

There will be a conjunction of Jupiter, Venus and the star Antares in the southeastern predawn sky all week - each morning, Venus will appear to creep slowly closer to Jupiter.

Mars remains high in southwestern sky after sunset all week; the Moon will appear near Mars on Jan. 12th.

M51 - The The Whirlpool Galaxy

M51 is an interacting grand-design spiral galaxy with an active galactic nucleus. The galaxy is in the constellation Canes Venatici, and was the first galaxy to be classified as a spiral galaxy. Its distance is estimated to be between 15 - 35 million light-years. 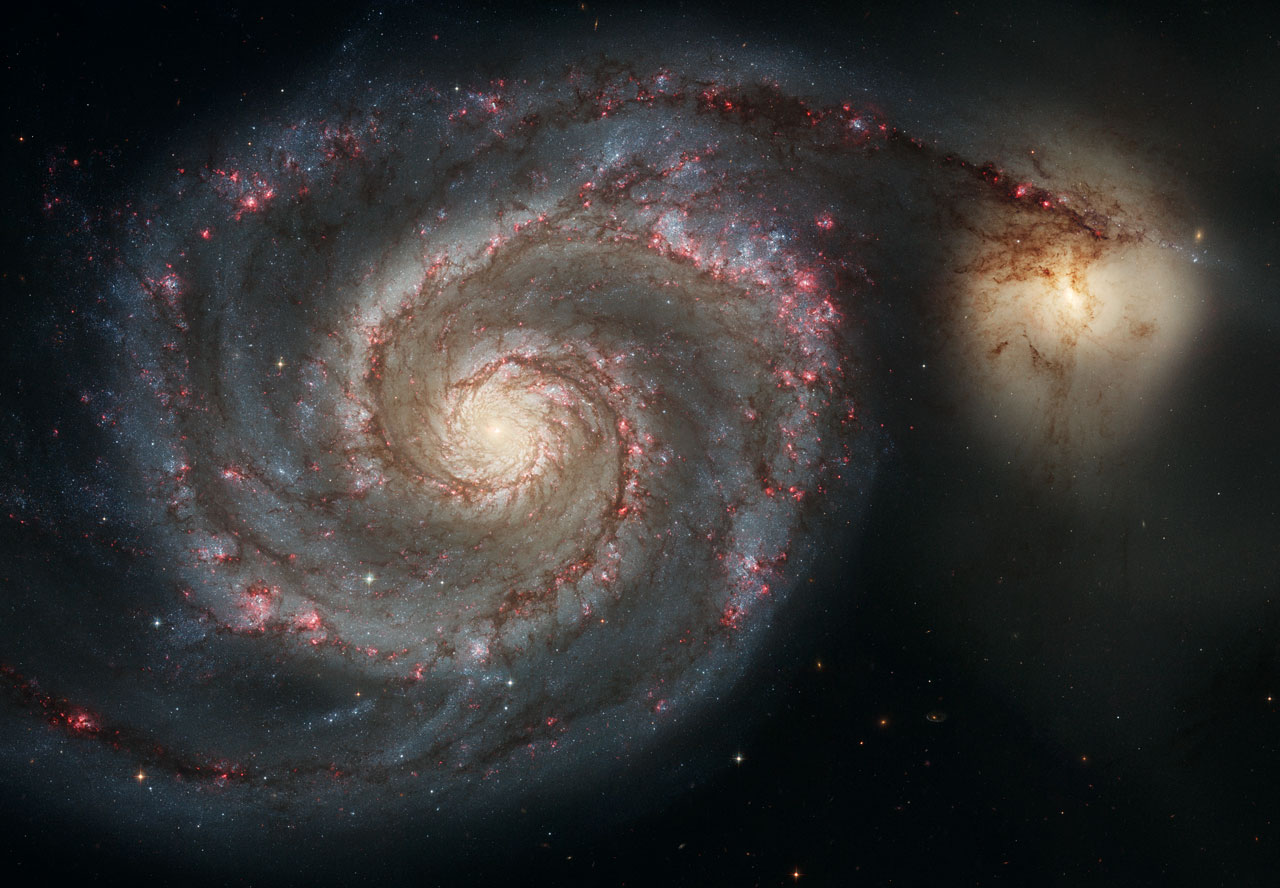 The Whirlpool's most striking feature is its two curving arms, a hallmark of so-called grand-design spiral galaxies. Many spiral galaxies possess numerous, loosely shaped arms that make their spiral structure less pronounced. These arms serve an important purpose in spiral galaxies. They are star-formation factories, compressing hydrogen gas and creating clusters of new stars. In the Whirlpool, the assembly line begins with the dark clouds of gas on the inner edge, then moves to bright pink star-forming regions, and ends with the brilliant blue star clusters along the outer edge.

Some astronomers believe that the Whirlpool's arms are so prominent because of the effects of a close encounter with NGC 5195, the small, yellowish galaxy at the outermost tip of one of the Whirlpool's arms. At first glance, the compact galaxy appears to be tugging on the arm. Hubble's clear view, however, shows that NGC 5195 is passing behind the Whirlpool. The small galaxy has been gliding past the Whirlpool for hundreds of millions of years.
- SpaceTelescope.org

Doug Bock is an astrophotographer I know who has been cranking out images for the last couple months - here's Doug's pic of M51:

Some people like this version better of M 51 in Canes Venatici. pic.twitter.com/8bw882OZaC

The Moon will be an excellent observing target for the next couple weeks!

The Sun has a small spot that is rotating out of view; the spot has been blowing off B-class and one C-class solar flares. The large coronal hole at the northern pole has a couple islands and a tendril reaching southward. The southern coronal hole appears to have opened back up.  SpaceWeather.com says "Over the weekend, a high-speed stream of solar wind buffeted Earth's magnetic field, sparking big green auroras around the Arctic Circle. Last night in Utsjoki, Finland, Tiina Salonen of Aurora Holidays noticed something extra--a fringe of pink."

Another beautiful, long-lasting, and large prominence can be seen in the lower-left side of the video below!

In this diagram of the inner solar system, all of the fireball orbits from Jan. 6, 2018 intersect at a single point--Earth. Source: Spaceweather.com

Just saw what might be a meteorite over Gisborne- looked like it went to earth further east. Hear us all buzzz out! pic.twitter.com/Ylow0bD9ZT

Here's a post related to the tweet above: Meteor Or Russian Satellite? Fireball In The Sky Raises Questions

Position of the planets in the inner solar system, Jan. 8, 2019. Credit: NASA Eyes on the Solar System / Bob Trembley.

Position of the planets in the middle solar system, Jan. 8, 2019. Credit: NASA Eyes on the Solar System / Bob Trembley.

Position of the planets in the middle solar system, Jan. 8, 2019. Credit: NASA Eyes on the Solar System / Bob Trembley.

On Dec. 3, the second MinXSS CubeSat was launched to study the soft X-rays from solar flares. 🛰☀️ Dive into the data from MinXSS-1: https://t.co/SxrPYpu2fq pic.twitter.com/SS0N4p61aJ

OSIRIS-REx - In orbit around asteroid Bennu for 7 days

I've been in orbit around Bennu for about seven days now. As I orbit the asteroid, Bennu also continues its orbit around the Sun. We -- Bennu and I -- are currently about 103 million kilometers (64 million miles) from Earth. pic.twitter.com/Z6VidqpPNl

No change for last 2 weeks - most likely due to the U.S. government being shutdown.