I would just like to say that the volunteers from the Warren Astronomical Society are simply the best! Two different groups collectively froze their posteriors off running Lunar Eclipse outreach events at Stargate Observatory and assisting Cranbrook Institute of Science with their event, which saw several hundred guests!

As Venus moves down towards the horizon, the several weeks-long conjunction of Venus, Jupiter and the star Antares in the southeastern predawn sky is slowly spreading apart.

Conjunction of Venus, Jupiter and the star Antares is spreading out the southeastern predawn sky. Credit: Stellarium / Bob Trembley.

The Moon reappears in the southwestern sky as a waxing crescent later in the week - keep an eye out for earthshine!

The Moon appears near Mars high in the southwestern sky after sunset on Feb. 10th. Through binoculars, Uranus and Mars will appear in the same field of view - you may not be able to see Uranus due to the Moon washing it out tho...

The Moon, Mars and Uranus high in the southwestern sky after sunset on Feb. 10, 2019. Credit: Stellarium / Bob Trembley.

The Double Cluster and the constellation Cassiopeia appear to the northwest sky early in the morning.

In suburban skies, you can just barely make out the Double Cluster; from dark sky locations, the cluster is clearly visible to the naked eye. I remember seeing the Double Cluster from the shores of Lake Superior in 2000 - it was so bright and clear, it was startling!

The Double Cluster (also known as Caldwell 14) is the common name for the open clusters NGC 869 and NGC 884 , which are close together in the constellation Perseus. Both visible with the naked eye, NGC 869 and NGC 884 lie at a distance of 7500 light years. NGC 869 has a mass of 3700 solar masses and NGC 884 weighs in at 2800 solar masses; however, later research has shown both clusters are surrounded with a very extensive halo of stars, with a total mass for the complex of at least 20,000 solar masses. Based on their individual stars, the clusters are relatively young, both 12.8 million years old. - Wikipedia 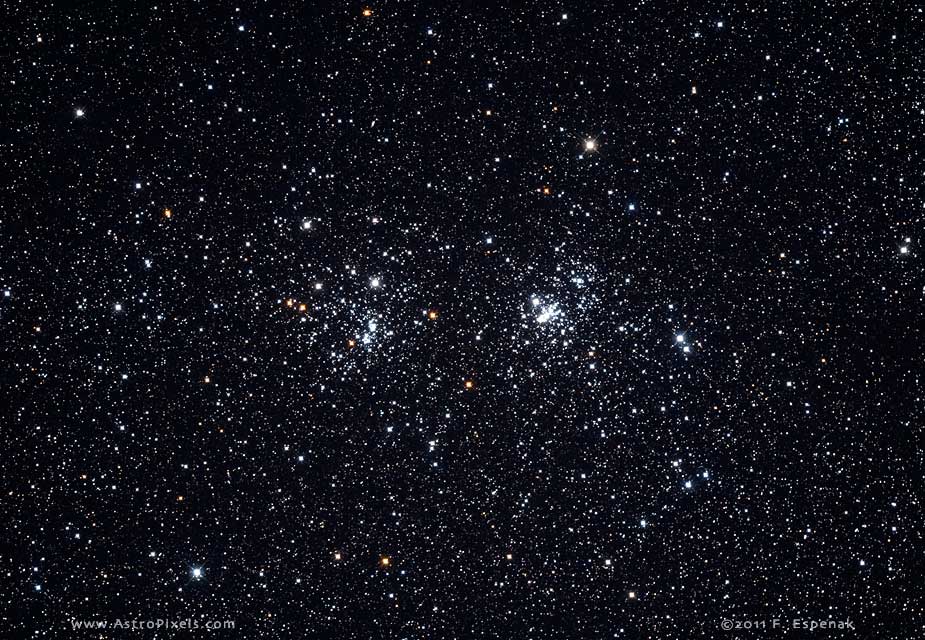 The Moon is just past new; later this week, it will be a waxing crescent, visible toward the southwest in early evening. The Moon should be a great observing target starting this weekend.

The Sun has been spot-free for 5 days; large coronal holes appear at both northern and southern poles. SpaceWeather.com says: "A southern hole in the sun's atmosphere is spewing solar wind toward Earth. G1-class geomagnetic storms are possible when the gaseous material arrives on Feb. 7th or (more likely) 8th. Arctic sky watchers should be alert for auroras."

Lots of prominence activity over the last couple days - look at the huge jumping loop in the lower left!

In this diagram of the inner solar system, all of the fireball orbits from Feb. 4, 2019 intersect at a single point--Earth. Source: Spaceweather.com

We Got Hit! Bolide Explodes over Cuba - Meteorites Found!

We've been HIT! Meteor seen over southern Florida explodes over Cuba, and litters ground with meteorites; explosion seen by GEOS-16 Satellite.https://t.co/RtJytfJw83 via @gizmodo

You can bet that professional meteorite hunters were on their way almost immediately... oh I SO want a meteorite from this fall!

This is the position of the planets and a couple spacecraft in the solar system; Mars continues to pull away from MarCO A & B, and the Parker Solar Probe is falling back in-system.

Position of the planets in the inner solar system, Feb. 5, 2019. Credit: NASA Eyes on the Solar System / Bob Trembley.

Position of the planets in the middle solar system, Feb. 5, 2019. Credit: NASA Eyes on the Solar System / Bob Trembley.

Position of the planets in the outer solar system, Feb. 5, 2019. Credit: NASA Eyes on the Solar System / Bob Trembley.

I’ve done it -- carefully placed this protective cover over my seismometer. Shielding it from wind and temperature changes will help it get its best measurements of any #marsquakes. Stay cozy in there, little guy! pic.twitter.com/6ZcqJPBqKj

Can you hear me now? I'm about 89 million kilometers (55 million miles) from Earth, and my round-trip light time is about 9 minutes and 53 seconds. 🛰〰📡

By mapping the distances to over 1,000 pulsating stars, astronomers have discovered a distinct kink in the Milky Way's disk. https://t.co/ZzimIQIcRh