Millions of people around the planet have seen NASA's Perseverance Rover descent and touchdown video - I've watched it over and over! I tweeted that this landing made me feel like a kid during the Apollo era again!

Cameras were not part of the rover's initial design - and were allowed to be added with the ideas that "they won't do any harm to the rover, and IF they work, great... you get what you get." Well what NASA got was a video seen across the globe, and a HUGE positive media boost - not to mention the invaluable engineering data these cameras have provided.

Can I just put out there that cameras should be default part of EVERY NASA mission from now on? Look at the Juno mission to Jupiter - the insanely popular citizen-scientist processed images and videos from Juno were obtained from a camera that was not originally part of the mission's specs, but were added as a public outreach tool.

The Moon appears near the star Pollux in the constellation Gemini, high above the east-southeastern horizon after sunset on Feb. 23rd.

The Moon appears near the star Pollux high above the east-southeastern horizon after sunset on Feb. 23rd. Credit: Bob Trembley / Stellarium.

Moving eastward each day, the Moon appears near the star Regulus in the constellation Leo, above the east-southeastern horizon after sunset on Feb. 25th and 26th.

The Moon appears near the star Regulus above the east-southeastern horizon after sunset on Feb. 25th and 26th. Credit: Bob Trembley / Stellarium.

The Moon appears in a temporary asterism with the stars Arcturus and Spica in the east-southeastern sky at midnight on Mar. 1st.

The Moon appears in east-southeastern sky with the stars Arcturus and Spica at midnight on Mar. 1st. Credit: Bob Trembley / Stellarium.

Mars and Uranus appear in the southwestern sky after sunset - Mars appears a bit closer to the Pleiades star cluster each evening.

Mercury and Saturn continue to appear low above the east-southeastern horizon before dawn this week; Jupiter joins the pair of planets close to sunrise - so it may be a bit difficult to see..

The full Moon occurs on Feb. 27th - rising at sunset, visible high in the sky around midnight, and visible all night.

After Feb. 27th, the Moon will be a waning gibbous - rising after sunset, visible high in the sky after midnight, and visible to the southwest after sunrise.

Like Mars, robotic visitors have explored the Moon, and more are set to rove, including @NASA's VIPER mission to the Moon's South Pole: https://t.co/GAHNtGCM9k pic.twitter.com/sxBMavnhsZ

The Sun has two new sunspots: AR2804 and AR2805 are growing rapidly and blowing off B-class solar flares.

LOTS of prominence activity over that last couple days - keep you eye on the prominence to the lower-right!

SOLARACTIVITY PICTURE OF THE DAY for Tuesday, February 23rd, 2021 goes out to 吉田賢一 for this great prominence image 吉田賢一 commented: "The Sun of the day Feb_21_2021JST ZWOASI174MM DaystarQuark Chromosphere TOA130."

The solar chromosphere — the thin, reddish layer of the Sun just above its surface — has always been hard to study. For the first time, a triad of NASA missions have peered into the chromosphere to return multi-height measurements of its magnetic field. https://t.co/K1XzyAPnX6 pic.twitter.com/Yj1if0wtap 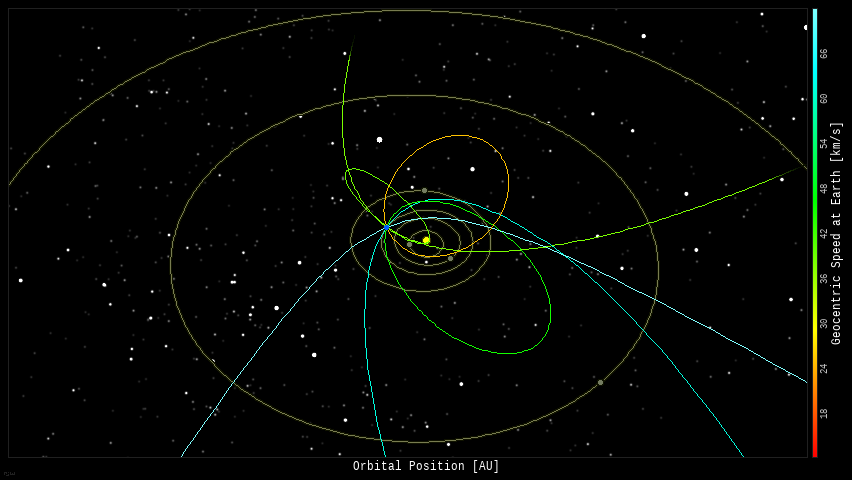 I used NASA's Orrery to create the solar system images for this week's post: https://eyes.nasa.gov/apps/orrery/. This app runs in the browser, and does not require the installation of an app. If you can see it, you can click on it; you can click and drag to scroll-around with the mouse (or use A, D, Q & E), and zoom with the mouse wheel (or use S and W).

Position of the planets and a couple spacecraft in the inner solar system, 2021-02-16. Credit: Bob Trembley / NASA Eyes Orrery.

And Mars' population of robots increases by 5 this week: NASA's Perseverance rover and Ingenuity helicopter, the United Arab Emirates orbiter named Al-Amal, and China's orbiter-rover combo called Tianwen-1... it's been a busy week at Mars, but that's what happens during launch windows...

Aside: When I've been playing Kerbal Space Program, there have been a couple time when I've had multiple missions all arriving at Duna (Mars) at the same time; juggling a polar orbiter, space station core in equatorial orbit, and lander - all at the same time is "exciting!"

Position of the planets and many transneptunian objects in the middle solar system, 2021-02-23. Credit: Bob Trembley / NASA Eyes Orrery.

Position of the planets and many transneptunian objects in the outer solar system, 2021-02-23. Credit: Bob Trembley / NASA Eyes Orrery.

Position of the planets, dwarf planets and some transneptunian objects and space probes in the extreme outer solar system:

Position of the planets and many transneptunian objects in the extreme outer solar system, 2021-02-23. Credit: Bob Trembley / NASA Eyes Orrery.

And finally, the position of the Sun in the Milky Way galaxy - if you zoom WAY out:

In the "This is WAY too much fun" department - there was a secret message, written in binary, hidden in Perseverance's parachute!

"Dare Mighty Things," and the latitude and longitude of JPL.

Thank you again to everyone that participated in our #PerseveranceLanding Challenge. Here's a few of our favorite submissions:

On Mon., March 1, we'll highlight the second crew rotation flight of a U.S. commercial spacecraft with astronauts to the @Space_Station! Get the latest on NASA's @SpaceX Crew-2 mission beginning at 12:30pm ET: https://t.co/8Xc03d2cMu#LaunchAmerica pic.twitter.com/CTBgRX2srF

Perseverance on the Ground

Each inset is about 200 meters (650 feet) across: Perseverance, the parachute & back shell, the remains of descent stage (skycrane) and the heat shield.

Today @Astro_Soichi welcomed the @northropgrumman #Cygnus cargo spacecraft, named the S.S. Katherine Johnson, with an open @csa_asc #Canadarm2 to the @space_station, while @Astro_illini monitored its approach. Parked at the Unity module, the space freighter will remain until May. pic.twitter.com/GkGPPYFF90

During the Leonid meteor storms of the late 1990s and early 2000s, scientists rotated the Hubble Space Telescope so that its most sensitive side — the open telescope — was pointed away from Leo, from which the meteors appear to radiate. https://t.co/lR4VkjB1yZ

January 2021 numbers are in: Earth's global average concentration of atmospheric carbon dioxide was about 415 parts per million, a 32% rise since direct measurements began in 1958 and a 48% rise since pre-industrial levels (1850). https://t.co/qjYgQZqqbL

.@NASAHubble also provided the first clues to the chemistry of a unique class of young planets. "Super-Puffs" have the density of cotton candy. Nothing like them exists in our solar system! https://t.co/XeDPiDCgrx pic.twitter.com/CaVed9bxFM

2 days ago, we experienced the best aurora night in years over Tromsø with ridiculously colorful coronal auroras 😳😍 Enjoy!

In honor of #BlackHistoryMonth, we are bringing awareness to how #lightpollution disproportionately impacts the Black community and starting conversations about forced illumination and environmental justice.

Have your students joined our February art challenge yet? 🎨

This month’s challenge is all about our Sun! ☀️ Review the prompt and submission guidelines here: https://t.co/tIA07Ol32e

👇 Here are some of our January selections! pic.twitter.com/aNuDhKPIdH

Distant stars serve as a backdrop for Supernova 1987A, located in the center of the image. The bright ring around the central region of the exploded star is composed of material ejected by the star about 20,000 years before its demise. Gaseous clouds surround the supernova. The clouds' red color represents the glow of hydrogen gas, which is fueling a firestorm of star birth.

Available in early-access on Steam, Dyson Sphere Program is a science fiction themed factory simulation game where the ultimate goal is to harvest resources from planets across multiple star systems and build a Dyson Sphere megastructure. The learning curve is pretty steep, but if you like engineering and problem-solving games, this is worth a look - it's been selling like gangbusters since release on Jan. 21st. The fact that there's a game out there with this subject pretty much guaranteed I had to get it.

Screenshot from Dyson Sphere Program video on Steam. A Dyson Swarm is in equatorial orbit, and the sphere lattice is being built. Credit: Youthcat Studio.

Cover Image: Artist's illustration of Mars Perseverance descent to Mars, the spacecraft containing NASA’s Perseverance rover slows down using the drag generated by its motion in the Martian atmosphere. Hundreds of critical events must execute perfectly and exactly on time for the rover to land on Mars safely on Feb. 18, 2021. Credit: NASA/JPL-Caltech.

Stellarium: a free open source planetarium app for PC/MAC/Linux. It's a great tool for planning observing sessions. A web-based version of Stellarium is also available.