NASA's Mars 2020 Perseverance rover lands on Thursday Feb. 18th, and NASA is inviting the public to take part in virtual activities and events as the rover nears entry, descent, and landing. Touchdown on Mars is scheduled for approximately 3:55 p.m. EST Thursday! This will be the second landing on Mars using the sky crane maneuver to lower the heavy rover down to the surface. 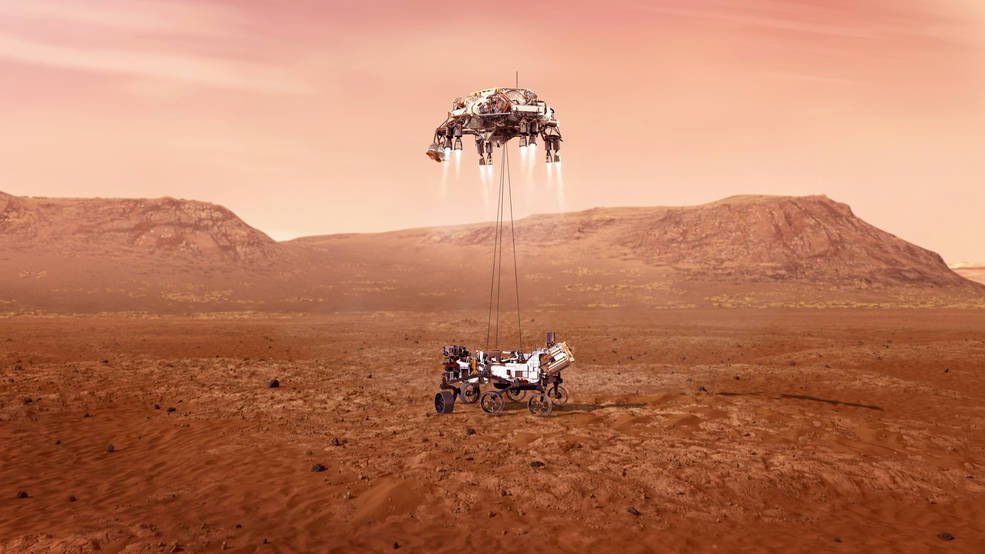 An illustration of NASA’s Perseverance rover landing safely on Mars. Hundreds of critical events must execute perfectly and exactly on time for the rover to land safely on Feb. 18th. Credits: NASA/JPL-Caltech

The waxing crescent Moon appears high in the west-southwestern sky after sunset on Feb. 16th.

The Moon appears near Mars high in the southern sky after sunset on Feb. 18th, then by the star Aldebaran on Feb. 19th and 20th.

Mercury and Saturn appear low above the east-southeastern horizon before dawn this week; by early next week those two planets will be a bit higher above the horizon, and Jupiter will join them.

In a previous post, I wondered if a space telescope observing the Sun would catch a glimpse of these planets... sure did!

The Parker Solar Probe team released a two-image mosaic that shows all the inner planets from Mercury to Saturn. I realized that if they could get a good baseline it would allow the solar system to be seen in 3D. Brian May responded with this simulated stereo pair. pic.twitter.com/Bk8XCD1EcC

The Moon is a waxing crescent - visible to the southwest in the early evening.

After Feb. 19th, the Moon will be a waxing gibbous - visible to the southeast in early evening, and up for most of the night.

The Sun has been spotless for 12 days - that would mean that the "small, as-of-yet unnamed, sunspot rotating into view" from last week faded, and was not named.

Sun News: Animation of Cosmic Rays and the Heliopause 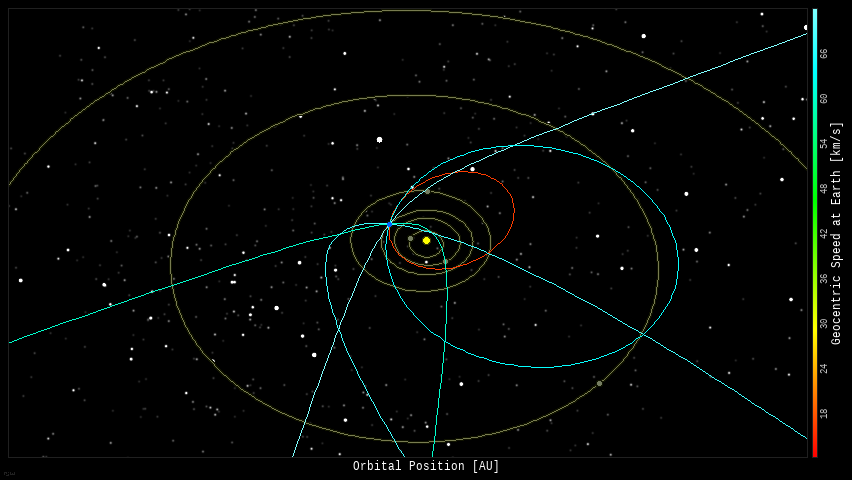 WATCH: A meteor lit up the night sky in Melbourne, Australia on Sunday. The meteor is thought to be not much bigger than a marble but appeared visible due to the fast speed it was traveling, at up to 25 miles per second. pic.twitter.com/KekaOzadkn

Position of the planets and a couple spacecraft in the inner solar system, 2021-02-16. Credit: Bob Trembley / NASA Eyes on the Solar System.

The Parker Solar Probe will fly-by Venus on Feb. 20th:

Simulation of the NASA's Parker Solar Probe as it flies-by Venus on 2021-02-20. Credit: Bob Trembley / NASA Eyes on the Solar System.

Orbit of NASA's Perseverance Mars Rover as it approaches Mars; the rover is getting close enough to Mars the the orbits of other spacecraft around Mars have started to resolve in the NASA Eyes app.

Simulation of the orbit of NASA's Perseverance Mars Rover on 2021-02-16 as it approaches Mars. Inset: Disk of Mars just visible in the distance as seen from the spacecraft.
Credit: Bob Trembley / NASA Eyes on the Solar System.

Position of the planets in the middle solar system, 2021-02-16. Credit: Bob Trembley / NASA Eyes on the Solar System.

Position of the planets and many transneptunian objects in the outer solar system, 2021-02-16. Credit: Bob Trembley / NASA Eyes on the Solar System.

IEEEEE! Only 3 Mars Marbles left! We've moved one between the jars each day of cruise. pic.twitter.com/OcgckZLqlY

And we have liftoff! Russia's Progress 77 resupply ship lifted off from the Baikonur Cosmodrome in Kazakhstan and is en route to the International Space Station. https://t.co/cBNqC5JGaz pic.twitter.com/Md72TjLXif

This image shows a large sand dune with bright patches. Martian dunes near the poles often have bright patches in the spring, when seasonal frost is lingering.

The #Cygnus spacecraft launching from Wallops to the @Space_Station on Feb. 20 is named after @NASA mathematician Katherine Johnson, who pushed boundaries and continues to inspire girls in STEM today. #WomenInScience Day #BlackHistoryMonth

📷 This is NGC 6397, a globular cluster, glittering with the light from hundreds of thousands of stars, seen by the NASA/ESA @HUBBLE_space Telescope 👉 https://t.co/ySVuA1LX9l pic.twitter.com/l1QSaOpgmK

Educators, need a simplified explanation of the greenhouse effect to teach your students? NASA's Climate Kids has a video and article laying it out. https://t.co/eQvH7yMAWD

Dr. Miner is a @NASAJPL scientist working on @NASAClimate research as part of the joint @NASAEarth/@ESA Arctic Methane & Permafrost Challenge.

✨Discovery Alert: New Worlds in a River of Young Stars!✨
The system is in the newly discovered Pisces-Eridanus stream of stars less than 3% the age of our solar system. Two distant stellar companions likely circle each other far beyond the planets. https://t.co/ito21jg247 pic.twitter.com/o9UGjM9Zs0 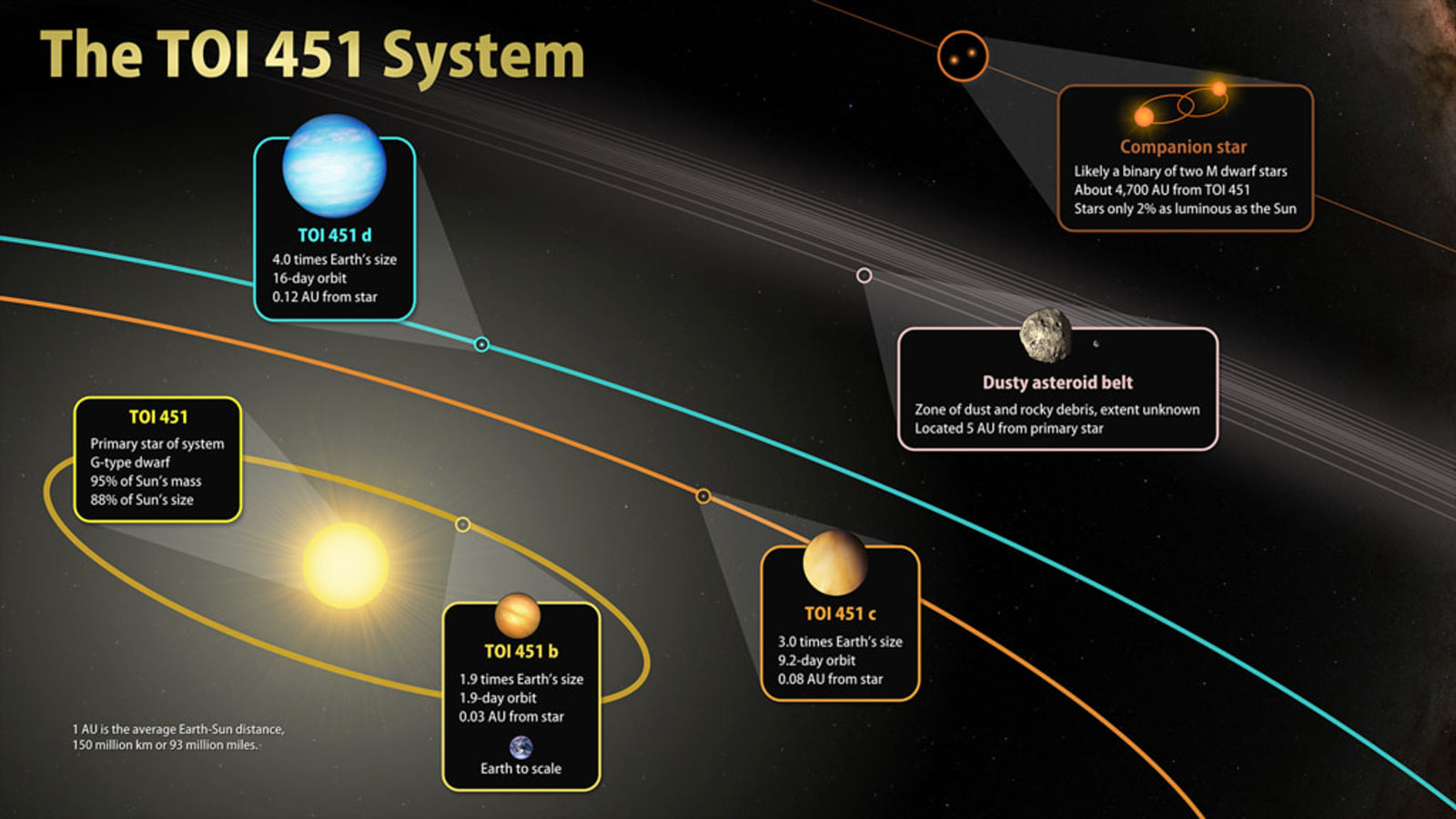 This illustration sketches out the main features of TOI 451, a triple-planet system located 400 light-years away in the constellation Eridanus. Credit: NASA’s Goddard Space Flight Center

In today's @Telegraph: a nice feature on dark skies & @IDADarkSky parks in the UK. I spoke to them about the importance of light pollution on carbon emissions, climate change and human health, and what my vision is for @darkskylondon. 🌃✨ https://t.co/Ke7gcf67Hm pic.twitter.com/Kxe3wxScer

Register now to get an education plan for landing week, plus take part in live Q&As for students as we #CountdownToMars!https://t.co/qEIT89zRFB 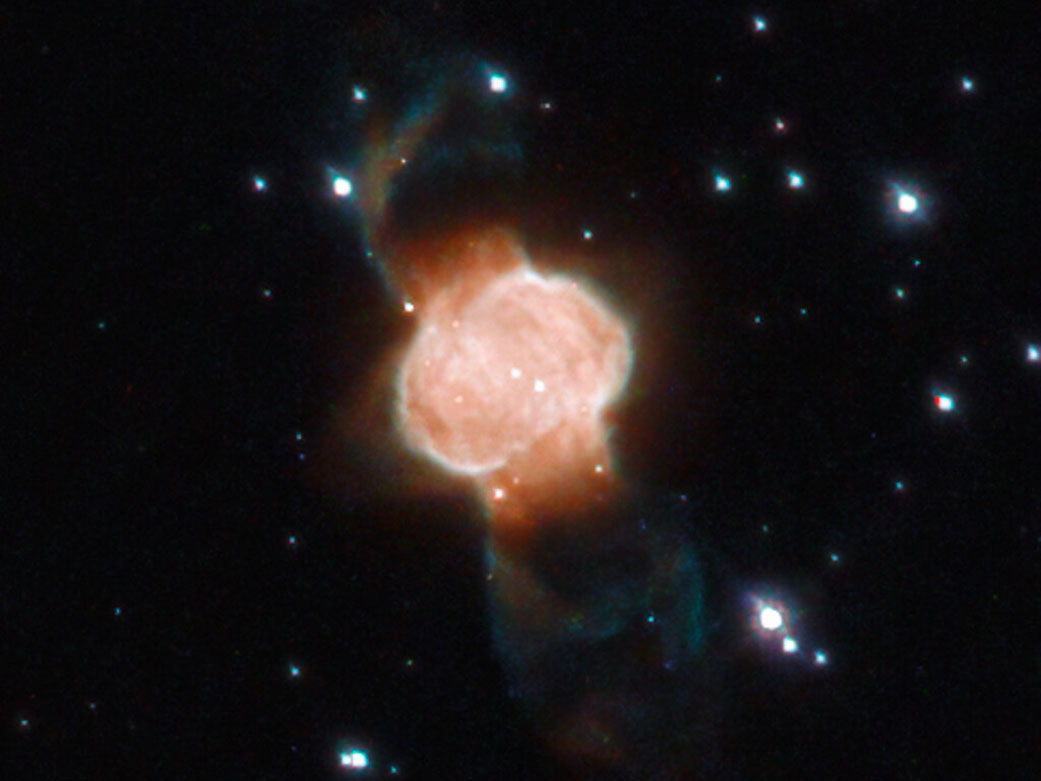 This image from the NASA/ESA Hubble Space Telescope features an impressive portrait of M1-63, a beautifully captured example of a bipolar planetary nebula located in the constellation of Scutum (the Shield). A nebula like this one is formed when the star at its center sheds huge quantities of material from its outer layers, leaving behind a spectacular cloud of gas and dust.

It is believed that a binary system of stars at the center of the bipolar nebula is capable of creating hourglass or butterfly-like shapes like the one in this image. This is because the material from the shedding star is funneled toward its poles, with the help of the companion, creating the distinctive double-lobed structure seen in nebulae such as M1-63. - NASA.

Cover Image: Artist's illustration of Mars Perseverance descent to Mars, the spacecraft containing NASA’s Perseverance rover slows down using the drag generated by its motion in the Martian atmosphere. Hundreds of critical events must execute perfectly and exactly on time for the rover to land on Mars safely on Feb. 18, 2021. Credit: NASA/JPL-Caltech.