Jupiter and Saturn appear above the southwestern horizon at dusk - they continue to move away from each other with each night. As the Earth's orbit brings the Sun between us and the pair of planets, they set shortly after sunset, and will not be visible after the first week of 2021.

Jupiter and Saturn and appear above the southwestern horizon at dusk. Credit: Bob Trembley / Stellarium.

Venus appears in the southeastern predawn sky all week - appearing much lower than it has been in recent weeks.

The Moon appears in the constellation Gemini from Dec. 29-30. Credit: Bob Trembley / Stellarium.

The constellations Ursa Major and Leo appear in the east-northeastern sky at 1:00 AM - the Moon appears in Leo from Jan 2-4th.

The full Moon occurs on Dec, 30th - rising at sunset, visible high in the sky around midnight, and visible all night; I saw this through my skylight as I was making my coffee this morning.

After Dec. 29th, the Moon will be a waning gibbous - rising after sunset, visible high in the sky after midnight, and visible to the southwest after sunrise.

We are looking for ideas on how to excavate the Moon’s icy regolith, or dirt, and deliver it to a hypothetical processing plant at the lunar South Pole.

Enter the Break the Ice Lunar Challenge and be a part of the #Artemis program: https://t.co/tIAwHE6fFk pic.twitter.com/WXpwp1Yv0C

Let me just mention that In-Situ Resource Utilization (ISRU) components have been part of Kerbal Space Program for years, and I have completed missions that require locating resources on the Moon's surface using orbital reconnaissance, landing mining equipment on the Moon, mining resources, and returning those resources to lunar orbit for processing at a space station. Yea... there's a reason I like KSP...

NASA recently gave out a new round of grants for its favourite up and coming innovative space projects. One of which is a plan to fit a 1 km radio telescope inside a crater on the far side of the Moon, the largest radio telescope in the Solar System https://t.co/3NEsqpwoER pic.twitter.com/MXrqZy8xOO

The Sun has an interesting face with 2 spots - crack out your telescopes with solar filters! Neither sunspot poses a threat for strong flares.

The Sun on Dec. 29th - both of the sunspots have stable magnetic fields that pose little threat for strong flares. Credit: SDO/HMI/spaceweather.com

Several prominences across the Sun's limb; the two sunspot regions look like angry scars in 304 A - AR2796 (leftmost of the 2 sunspots) is spitting a lot of low-level flares.

This morning, @ESA & @NASA’s #SolarOrbiter completes its first Venus flyby! The spacecraft uses the planet’s gravity to swing closer to the Sun and tilt its orbit for the first-ever view of the Sun’s poles. 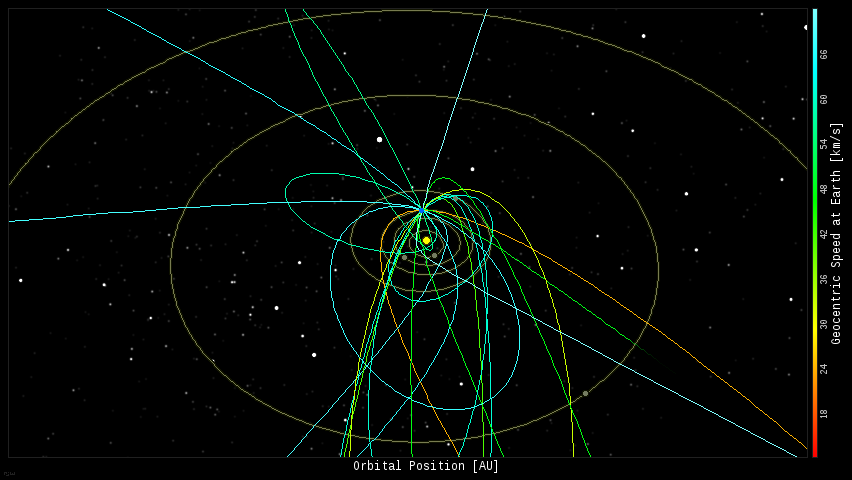 Position of the planets and a couple spacecraft in the inner solar system, 2020-12-29. Credit: Bob Trembley / NASA Eyes on the Solar System.

Position of the planets in the middle solar system - the orbit of comet 67P/Churyumov–Gerasimenko is highlighted.

Position of the planets in the middle solar system, 2020-12-29. Credit: Bob Trembley / NASA Eyes on the Solar System.

Position of the planets, dwarf planets and some transneptunian objects in the outer solar system - the orbit of bilobed TNO Arrokoth is highlighted.

Position of the planets and some transneptunian objects in the outer solar system, 2020-12-29. Credit: Bob Trembley / NASA Eyes on the Solar System.

How did we get here? How do stars and planets come into being? What happens during a star's life, and what fate will its planets meet when it dies? Come along on this interactive interstellar journey through time: https://t.co/D1b6BCxila pic.twitter.com/Yi0OVA7k43

I’m on a one-way mission to Mars, but the samples I collect there will be the first things ever to make a round trip. In the search for signs of ancient life on Mars, see how super-clean sample tubes make for super-clean science. https://t.co/icIt9rVe00 #CountdownToMars pic.twitter.com/9DzY9biZEL

It's Monday! And what do Mars and Monday have in common? Well nothing... but they both start with 'M' and that's all we need to gush over these captivating @HiRISE images of the Red Planet. 🤩
Get your Monday Martian fix any day of the week: https://t.co/VNXla76YIR pic.twitter.com/A90oxLW24j

ESA/Hubble #Flashback: This bright spiral galaxy is known as NGC 2441, located in the northern constellation of Camelopardalis (The Giraffe).

Juno has observed that Jupiter’s magnetic field is changing over time. More: https://t.co/dyWgvUXJTm

Plants help mitigate climate change. The more carbon dioxide they absorb, the less CO2 remains in the atmosphere. But scientists have found that 86% of land ecosystems are becoming less efficient at absorbing increasing levels of the greenhouse gas: https://t.co/JXuNhaFRFx pic.twitter.com/n0xBbtQRl1

What’s it like trying to build a NASA Earth satellite from home? The #NISAR team shares their experience and tells us more about the upcoming mission and what it's like working with our partners from @isro 🇮🇳 halfway around the world. pic.twitter.com/ZX7XlzlOWl

There are so many ways to get involved with citizen science. In fact, @NASA has several ways you can help discover worlds! https://t.co/H3qSzlLxiP

A spectacular view of the "northern lights" as seen from the @Space_Station! This 2017 image shows the station's solar arrays in the foreground and entrancing reds and greens of the auroras, dancing above Earth.

Is your student out-of-this-world imaginative? If so, their artwork could be featured on NASA Space Place! 💫

A mysterious signal is coming from the closest star to our own, Proxima Centauri, a star too dim to see from Earth with the naked eye, at 4.2 light-years away. https://t.co/tps3pf8Zbv

An as-yet unexplained radio signal appears to be coming from the direction of the star closest to the sun—a small red star roughly 4.2 light-years away called Proxima Centauri. https://t.co/crOcz6At2R

Alien hunters detect mysterious radio signal from nearby star - It's almost certainly not an extraterrestrial telegram. But waves that seemed to come from the vicinity of Proxima Centauri will help astronomers refine their search techniques. https://t.co/BwwkKKoNqh #SETI pic.twitter.com/lQqwkMNvSi

NOTE: An update to Stellarium has been released!

Stellarium v0.20.4 has been released! https://t.co/J8KqNQUTxn