Merry Christmas everyone! Sorry this post is a tad late, I've been a bit preoccupied the last couple days...

The multi-planet conjunction in the eastern predawn sky continues this week.

Mars remains high in southern sky after sunset all week; Mars is now at magnitude 0.39, down significantly from -2.78 during opposition at the end July 2018.

The stars Altair and Vega battle for the title of "evening star" in the western sky at dusk.

The Moon appears in the constellation Leo at midnight Dec. 27th.

M64 is a spiral galaxy located 17 million light years away in the constellation of Coma Berenices. 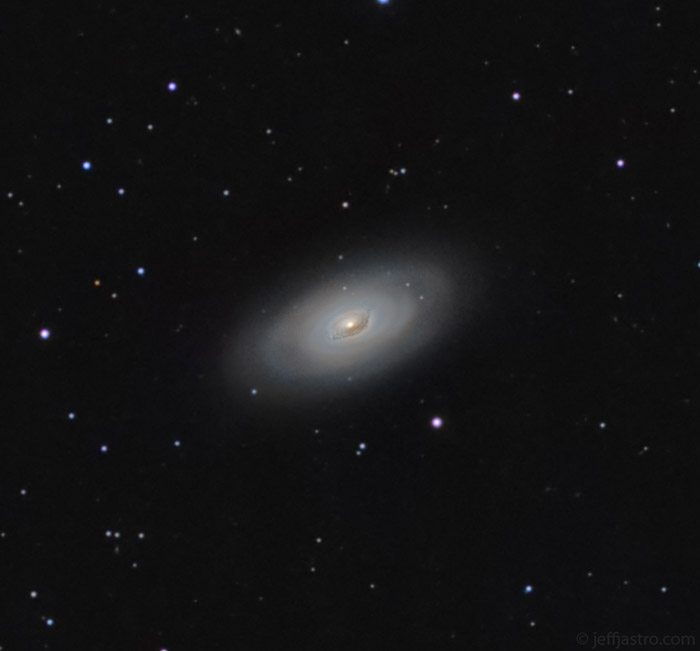 "A collision of two galaxies has left a merged star system with an unusual appearance as well as bizarre internal motions. Messier 64 (M64) has a spectacular dark band of absorbing dust in front of the galaxy's bright nucleus, giving rise to its nicknames of the "Black Eye" or "Evil Eye" galaxy.

Fine details of the dark band are revealed in this image of the central portion of M64 obtained with the Hubble Space Telescope. M64 is well known among amateur astronomers because of its appearance in small telescopes. It was first cataloged in the 18th century by the French astronomer Messier. Located in the northern constellation Coma Berenices, M64 resides roughly 17 million light-years from Earth.

At first glance, M64 appears to be a fairly normal pinwheel-shaped spiral galaxy. As in the majority of galaxies, all of the stars in M64 are rotating in the same direction, clockwise as seen in the Hubble image. However, detailed studies in the 1990's led to the remarkable discovery that the interstellar gas in the outer regions of M64 rotates in the opposite direction from the gas and stars in the inner regions.

Active formation of new stars is occurring in the shear region where the oppositely rotating gases collide, are compressed, and contract. Particularly noticeable in the image are hot, blue young stars that have just formed, along with pink clouds of glowing hydrogen gas that fluoresce when exposed to ultraviolet light from newly formed stars.

Astronomers believe that the oppositely rotating gas arose when M64 absorbed a satellite galaxy that collided with it, perhaps more than one billion years ago. This small galaxy has now been almost completely destroyed, but signs of the collision persist in the backward motion of gas at the outer edge of M64.

This image of M64 was taken with Hubble's Wide Field Planetary Camera 2 (WFPC2). The color image is a composite prepared by the Hubble Heritage Team from pictures taken through four different color filters. These filters isolate blue and near-infrared light, along with red light emitted by hydrogen atoms and green light from Strömgren y." - HubbleSite

The Sun has been spot-free for 9 days now. The large coronal hole at the northern pole has spawned a tendril extending down to the equator, and the southern coronal hole remains wide open. A region of coronal loop activity is rotating into view - this region is visible in both videos below.

SpaceWeather.com says "A northern hole in the sun's atmosphere is turning to face Earth and it is spewing a stream of solar wind in our direction. Estimated time of arrival: Dec. 28th. Arctic sky watchers should be alert for auroras in the nights after Christmas."

Lots of prominence activity over the last couple days - especially in the lower right of the video below.

In this diagram of the inner solar system, all of the fireball orbits from Dec. 25, 2018 intersect at a single point--Earth. Source: Spaceweather.com

Social media continues to be flooded with images of Comet 46P/Wirtanen.

Position of the planets in the inner solar system, Dec. 26, 2018. Credit: NASA Eyes on the Solar System / Bob Trembley.

Position of the planets in the middle solar system, Dec. 26, 2018. Credit: NASA Eyes on the Solar System / Bob Trembley.

Position of the planets in the outer solar system, Dec. 26, 2018. Credit: NASA Eyes on the Solar System / Bob Trembley.

Ending 2018 with a bang! 🎉 I'll go into orbit around asteroid Bennu for the first time on Dec. 31, and New Horizons will fly by Kuiper belt object Ultima Thule on Jan. 1! Why visit these small unexplored worlds? Glad you asked... #SeasonOfScience #NYE2019 https://t.co/km4i3P3uBO

Mars InSight - Deployed a seismometer on the surface of Mars

In case you missed it, here’s one for the history books: for the first time ever, I’ve placed a seismometer on the surface of #Mars! Once it’s all set up, I can start listening for marsquakes. More: https://t.co/GYNO4txPPi pic.twitter.com/vUkedVMcTX

The #NewHorizons spacecraft is on final approach to #UltimaThule! Lots happening to get ready for our historic #NYE19 flyby in the #KuiperBelt. Get the latest from Mission Principal Investigator Alan Stern in this new blog post --> https://t.co/yDyVDmo4bf pic.twitter.com/cGjYCbaR6Q

No change from last week.