Updating the Near-Earth Object stats for this post, I noticed that the number of known NEO's has crossed the 20,000 threshold! I need to update this chart every time I talk about asteroids - note the steep angle of the discovery curve, and how the curve keeps growing... precipitously!

The following chart shows the cumulative number of known Near-Earth Asteroids (NEAs) versus time. Totals are shown for NEAs of all sizes, those NEAs larger than ~140m in size, and those larger than ~1km in size. Credit: NASA/JPL-Caltech/Alan Chamberlin

If you get up at the crack of dawn, and look really low towards the eastern horizon, you may catch a glimpse of Mercury near Venus. Both planets will appear a bit lower in the sky each morning this week.

Mercury and Venus LOW in the eastern sky just before sunrise at 6:10 AM on Apr. 17th. The red and yellow dots show the positions of Mercury and Venus over the week. Credit: Stellarium / Bob Trembley.

Saturn, Jupiter and the star Antares appear in southern predawn sky all week; it's interesting to note that for the last several weeks these all appeared in the south-southeastern predawn sky.

Saturn and Jupiter and the star Antares in the southern predawn sky on Apr. 17, 2019. Credit: Stellarium / Bob Trembley.

Mars and the constellations Orion and Taurus in the western sky after sunset on Apr. 16, 2019. Credit: Stellarium / Bob Trembley.

Mars continues a slow crawl away from the Pleiades in the western sky after sunset. Mars appears very near the star Tau Tauri (τ Tau) on April, 18th.

Mars continues a slow crawl away from the Pleiades in the western sky after sunset from Apr. 16-22, 2019. Credit: Stellarium / Bob Trembley.

The full Moon appears near the star Spica in the southeastern sky after sunset on April 18th.

The full Moon near the star Spica in the southeastern sky after sunset on Apr. 18, 2019. Credit: Stellarium / Bob Trembley.

The full Moon occurs on Apr. 19th, rising at sunset, visible high in the sky around midnight, and visible all night long.

After the 19th, the Moon will be a waning gibbous, rising after sunset, visible high in the sky after midnight, and visible to the southwest after sunrise.

50 years ago, NASA continued preparing for the first Moon landing. At @NASAKennedy, workers stacked the Apollo 11 spacecraft on its Saturn V rocket. At the Manned Spacecraft Center, now Johnson Space Center, the crew continued training for the mission. https://t.co/AKAfmWutCC pic.twitter.com/I0vhwkUH7R

AR2738 continues to rotate across the face of the Sun, coronal loops following it; in previous days the region was blowing off multiple B-class solar flares, but now it appears to be quieting down. Astrophographer Marty Wise took this beautiful image of AR2738 showing a "light bridge" crossing the spot!

The northern coronal hole remains closed, and it appears as if the southern hole has greatly diminished.

Light prominence activity around the Sun's limb; you can see a few things being spewed out of AR2738 over the last couple days..

The E-TBEx CubeSats and the Space Environment Testbeds will study how #SpaceWeather can affect communications transmissions 📡 and satellite hardware 🛰 https://t.co/7zX3AiJMSz

Asteroid 3200 Phaethon is the second-largest “potentially hazardous” asteroid in Earth’s proximity. Here’s what it looks like, courtesy of Arecibo Observatory. https://t.co/PueAYD3Xh7 pic.twitter.com/Djts2iJFbx

Keep an eye out for meteors and fireballs during the Lyrid meteor shower this week!

The Lyrids are a medium strength shower that usually produces good rates for three nights centered on the maximum. These meteors also usually lack persistent trains but can produce fireballs. These meteors are best seen from the northern hemisphere where the radiant is high in the sky at dawn. Activity from this shower can be seen from the southern hemisphere, but at a lower rate.

If you see this kind of event, please report it here: https://t.co/qRilnZsyyF

#Fireball over #SanAntonio, TX on April 10th (caught on video from #Houston , TX).
If you see this kind of event, please report it here: https://t.co/N0EuOVkOgj

I saw this illustration posted numerous times on Twitter after part of Notre Dame burned down on April 15, 2019. My wife and I have not visited Paris; my daughter, who visited Paris a couple years ago, is devastated! 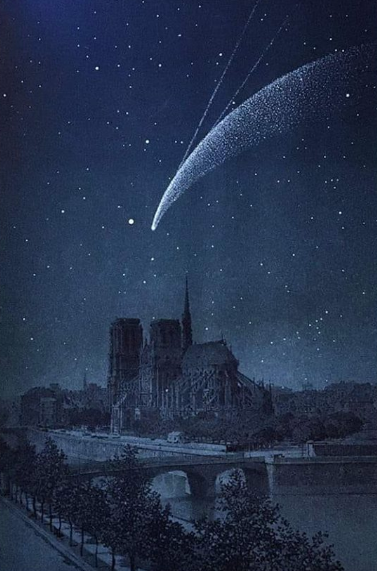 Position of the planets in the inner solar system, Apr. 16, 2019. Note: the Parker Solar Probe has past perihelion 2. Credit: NASA Eyes on the Solar System / Bob Trembley.

Position of the planets in the middle solar system, Apr. 16, 2019. Credit: NASA Eyes on the Solar System / Bob Trembley.

Position of the planets in the outer solar system, Apr. 16, 2019. Credit: NASA Eyes on the Solar System / Bob Trembley.

During @CassiniSaturn’s last look at Titan, Saturn’s largest moon, scientists gathered data that reveal what fills the moon's northern lakes — and how surprisingly deep they are: https://t.co/YDik8EIjSb pic.twitter.com/230Do30Wkw

Here's another view of Bennu's largest boulder, which protrudes from the asteroid's southern hemisphere. I took this on Mar. 7 during Flyby 1 of Baseball Diamond phase. To get this angle, I pointed PolyCam down and west while flying over the equator.

Congratulations to Goddard’s production team, members of which were named NASA’s “Videographers of the Year” with their first-place video “Arriving at Asteroid Bennu.” The video explores the @OSIRISREx team’s excitement as the mission arrived at asteroid Bennu. pic.twitter.com/EzXesdSh7W

Happy #CitSciDay2019! This JunoCam image of Jupiter was processed by citizen scientist Kevin Gill. JunoCam's raw images are available for the public to peruse and process into image products at https://t.co/3VG1TGeVA9 pic.twitter.com/ZCYuhEc0h1

In the arms of the maelstrom: in this view from JunoCam, bright white clouds can be seen popping up in and around the arms of a rotating northern hemisphere storm. https://t.co/p5ms1ZhFa2 pic.twitter.com/p0s1KlCPvL

[SCI] The deployable camera, DCAM3, successfully photographed the ejector from when the SCI collided with Ryugu’s surface. This is the world’s first collision experiment with an asteroid! In the future, we will examine the crater formed and how the ejector dispersed. pic.twitter.com/eLm6ztM4VX

From the History Books: Deep Impact's Impact Experiment on Comet Tempel 1 in 2005

What’s the latest on my robotic mole? The international team back on Earth is testing a new theory as to what might be slowing its progress—and ideas about how to proceed. Exploration is always an adventure!

Using the Gravity Recovery and Climate Experiment (GRACE) 🛰🛰 satellites, @NASA scientists tracked trends in aquifers 💧 around the planet 🌏 from 2002 to 2016 and used other satellite data to determine the causes of regional changes in water storage. https://t.co/hUkFxURlH8 pic.twitter.com/aacJjErcfc

Earth Climate Observing Satellites from NASA's Eyes on the Earth app - you can see info on each satellite, and overlay and animate satellite data on the globe.

TESS numbers are starting to climb!

Apologies for the bad link!

Kepler-16 b  - The existence of a world with a double sunset, as portrayed in the film Star Wars more than 30 years ago, is now scientific fact. NASA's Kepler mission has made the first unambiguous detection of a circumbinary planet - a planet orbiting two stars - 200 light-years from Earth.

Unlike Star Wars' Tatooine, the planet is cold, gaseous and not thought to harbor life, but its discovery demonstrates the diversity of planets in our galaxy. Previous research has hinted at the existence of circumbinary planets, but clear confirmation proved elusive. Kepler detected such a planet, known as Kepler-16b, by observing transits, where the brightness of a parent star dims from the planet crossing in front of it.

In Case You Missed It

An Historic Picture and an Infectious Smile: Who is Dr. Katie Bouman?