This column first appeared in The Tablet in October 2008; we first ran it here in 2016

Okie Tex in the Dark

Black Mesa, Oklahoma sounds like the setting for a Hollywood Western. It looks like one, too. Every year at the Okie-Tex Star Party, three hundred amateur astronomers camp out for a week with their telescopes there, in hopes of dark dry skies. Some of their “amateur” instruments are larger in aperture than the telescopes of the Vatican Observatory in Castel Gandolfo. The miracle of computerized fabrication and the modern Dobsonian mount (a way of holding a telescope in place that replaces complex hardware with simple Teflon pads) has brought the cost of quality optics to the point where the price of a large telescope can be less than that of a small automobile.

My GPS unit directed me as far as Boise City, two hours north of Amarillo, Texas; after that, I was following roads too small for most maps. I was there to give a series of talks during the afternoon and evening hours, entertainment insurance for the campers in case the skies did not cooperate. But that insurance was not needed; the three nights I spent there, the skies were spectacularly clear. Dark skies? That is in fact a misnomer. When there are no cities for hundreds of miles, the Milky Way alone shines so brightly that it actually casts a shadow. You can walk among the telescopes without bumping your neighbor or losing your way. 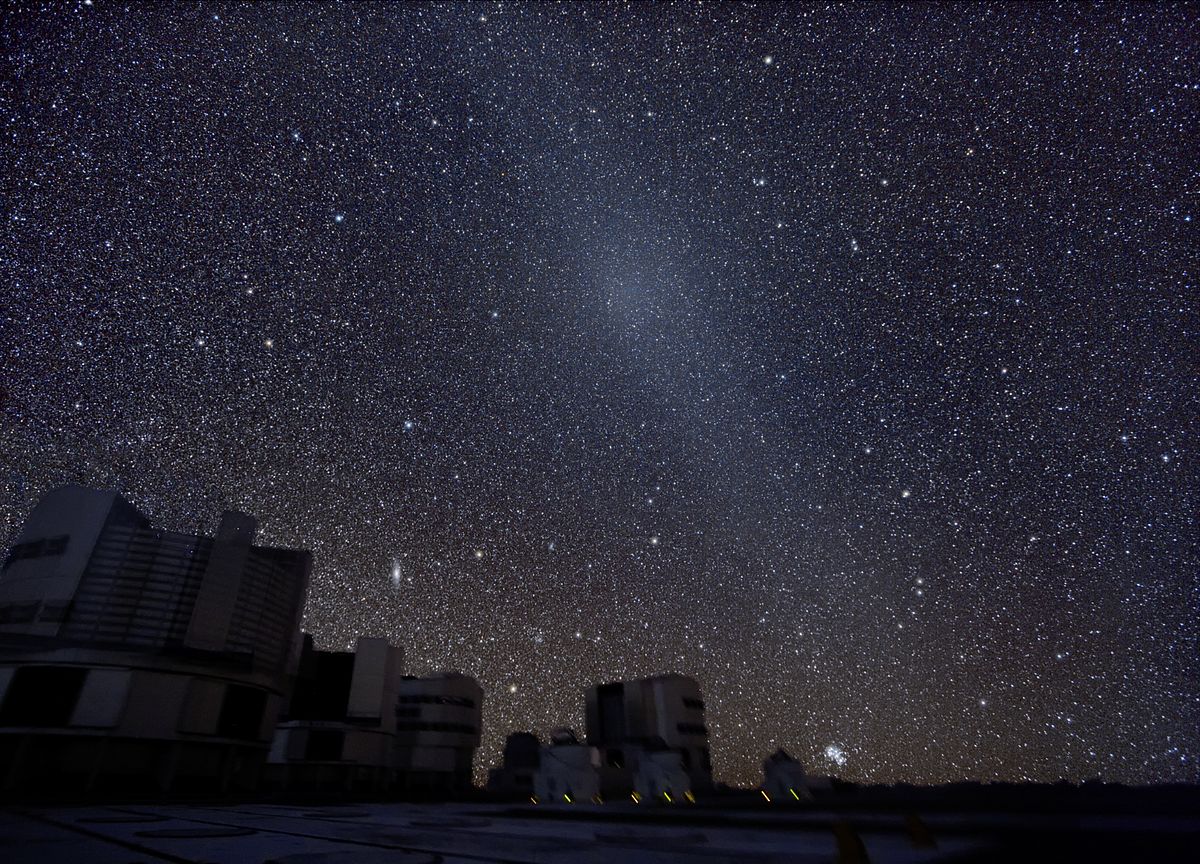 Wikipedia provided this nice view of the gegenschein, which appears in this image as a bright spot on the diagonal band (running top left to lower right) above the Very Large Telescope in Chile.

The enthusiasts sharing their telescopes with me were knowledgeable, if not professional. “Look, along the ecliptic, directly opposite the point where the Sun lies; around midnight, you can see sunlight reflected back to us from the dust of the asteroid belt,” one friend pointed out to me. “It’s called the googenshine!” Actually, that’s gegenschein; but I didn’t correct him. I had studied it in graduate school; I knew how to spell it, and what the German words mean. But unlike my friend, I had never actually seen it before.

A lot of professional astronomers never look at the night sky; some of them don’t even know how to find the most basic constellations. Even those of us who came to our professional calling from a teen-aged enthusiasm with small telescopes now spend most of our outdoor nights on high mountaintops: the thin atmosphere there can mean clearer images for our instruments, but it deprives our human eyes of the oxygen we need to see the stars in their full glory.

All sorts of analogies come to mind comparing the world of astronomy with religion. We know theologians whose inability to see the living God makes them seem oxygen deprived. We've met the simple believer who couldn’t spell hamartiology but who knows sin when they see it. And yet, the amateur astronomers were delighted to have a few professionals among them (I wasn’t the only speaker there) to enrich their enthusiasm. I suspect we were made more welcome, and listened to more closely, than most theologians visiting a parish would be.

My first night there, a bright flash lit up the sky and caused the observers to howl as their dark-adapted vision was momentarily destroyed. “Turn off the car headlines!” one of them shouted. It was, in fact, a bolide – a tumbling meteorite lighting up the sky as it burned away in the upper atmosphere. Such fireballs occur several times a month across the Earth. That same week, for the very first time, the fall of one such bolide was actually predicted. The professionals had discovered a meteoroid orbiting near Earth just a few days before it struck, and they successfully calculated its fall over the Sudan.

If pieces of either event actually survived to hit Earth as meteorites, it will probably be a posse of amateurs who will round them up. But it will be up to the professionals to judge the samples.