This column first ran in The Tablet in October 2013

For about six months, our Moon had a moon of its own: a small artificial satellite called “Ladee”, the Lunar Atmosphere and Dust Environment Explorer. Costing just under $300 million, a bargain, it is a little bit smaller than a Smart Car, a little bit larger than a Tardis: 7.7 feet tall, with a hexagonal cross section 4.7 feet in diameter. 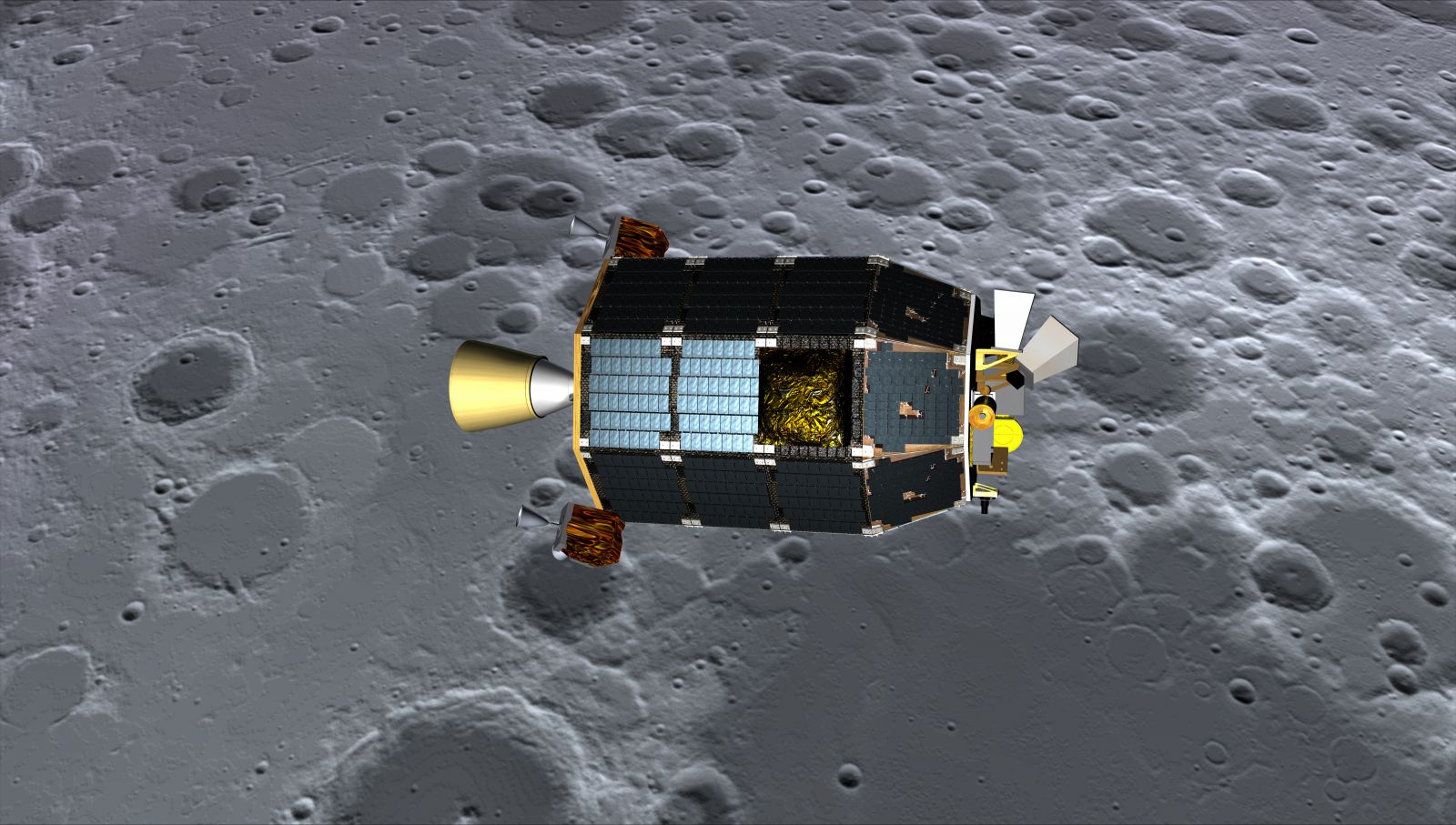 NASA launched it with an assembly of rockets built from old “Peacemaker” ICBM missiles. Originally designed to send nuclear bombs to the Soviet Union, these rockets are strictly controlled under a US-Russian arms treaty: the small facility at Wallops Island, off the Virginia coast, is one of the few places allowed to launch them. Thus, a bit before midnight on September 6, 2013, the rockets’ red glare was visible from nearby Washington DC and the eyes of the Congress who’d paid for it.

These small rockets put the spacecraft into a highly eccentric orbit, swinging first close to Earth then out towards the Moon. As Ladee project manager Butler Hine described it, “On the third pass, we’re hanging out there in space right around where the Moon is going to come by… it swings by [the Moon], whips around behind it, and then once we come out from behind the Moon, we do a big braking burn with our main engine.” The braking burn, killing the spacecraft’s speed so the Moon’s gravity could capture it, occurred on October 5. 2013. (At that time the US government, including Nasa, was shut down; fortunately, the laws of gravity were not suspended.) Further burns lowered the spacecraft to 20 km above the lunar surface. [Its ultimate fate is found on the LADEE web site: "10:59 p.m. PDT, April 17, 2014 - Ground controllers at NASA's Ames Research Center have confirmed that the Lunar Atmosphere and Dust Environment Explorer (LADEE) spacecraft has impacted the surface of the moon, as planned."]

“LADEE has two main science goals: To understand the lunar atmosphere, as well as the dust environment around the Moon,” according to Sarah Noble, Ladee’s program scientist. During the 1960s, a camera on the Surveyor 7 robot lander and the Apollo astronauts in orbit around the Moon noticed a glow above the surface of the Moon at sunrise. It’s thought that sunlight gives dust an electrical charge, causing it to levitate off the surface. But how much dust is there? How big and how strongly charged is it? Actual measurements of this dust can calibrate our models for how dust elsewhere in the solar system behaves. (I could have used those numbers 35 years ago, when I wrote my doctoral dissertation on the role of electrostatics in the formation of planets.) Ladee will also measure the composition and number of atoms per cubic centimeter in the Moon’s tenuous atmosphere, and how that varies above the lunar surface.

Besides understanding the physics of dust and thin neutral gases near a rocky surface in space, there’s also an engineering purpose to the mission. Quoting Hine again, “Dust is a very difficult environment to deal with on the moon. It’s… kind of evil. It works its way into equipment… How do you design things so that they can survive the dust environment?”

Sending the mission now was critical. The Chinese are planning to launch the robotic Chang’e-3 lunar lander later this year [it launced successfully on December 14], rumored to be part of a program to land Chinese astronauts on the Moon by 2020. “Things have been relatively quiet around the moon in terms of landings in the last few decades,” noted Dr. Noble, “but it’s not going to stay that way for long. Now is actually an ideal time to go and take a look at it while it’s still in its pristine, natural state.”

The very act of observing the Moon disturbs it. While this effect is most famously known in quantum physics, it’s true even in our macroscopic day-to-day existence.

We cannot know what the universe would have been like if we were not here, participating in it. Simply by being, we co-create our world.

"The Lunar Dust Experiment (LDEX) ... discovered a permanently present dust cloud engulfing the Moon... consistent with ejecta clouds generated from the continual bombardment of the lunar surface by sporadic interplanetary dust particles. Intermittent density enhancements were observed during several of the annual meteoroid streams, especially during the Geminids.

LDEX found no evidence of the expected density enhancements over the terminators where electrostatic processes were predicted to efficiently loft small grains...

Several of the yearly meteor showers generated sustained elevated levels of impact rates, ... LDEX observations are the first to identify the ejecta clouds around the Moon sustained by the continual bombardment of interplanetary dust particles. Most of the dust particles generated in impacts have insufficient energy to escape and follow ballistic orbits, returning to the surface, 'gardening' the regolith. Similar ejecta clouds are expected to engulf all airless planetary objects, including the Moon, Mercury, and the moons of Mars: Phobos and Deimos."]