This column first ran in The Tablet in November 2011

“We don’t serve sub-atomic particles like you here!” growls the bartender. A neutrino walks into a bar.

At the speed of the internet, jokes like that were making the rounds within hours after the announcement [in 2011] that energetic neutrinos produced at CERN in Switzerland were arriving at a detector in Italy, 730 kilometers away, about 60 nanoseconds sooner than they could have arrived even if they had been traveling at the speed of light.

The point of the joke has its basis in Einstein’s theory of Relativity. What we measure when we observe the fundamental units of nature, distance and time and mass, depends on the relative velocities of the observer and the thing being observed. Events that in one frame of reference seem to be occurring simultaneously, can appear to an observer moving at a different relative velocity to be happening at different times. The absolute limit, that no observer can travel faster than light, is necessary to insure that nobody infers a result occurring before its cause.

But that’s exactly what appears to be happening with these high energy neutrinos. If this result is correct, then there could be a frame of reference where an observer would deduce that the neutrinos arrived in Italy before they were actually created in the lab in Switzerland. 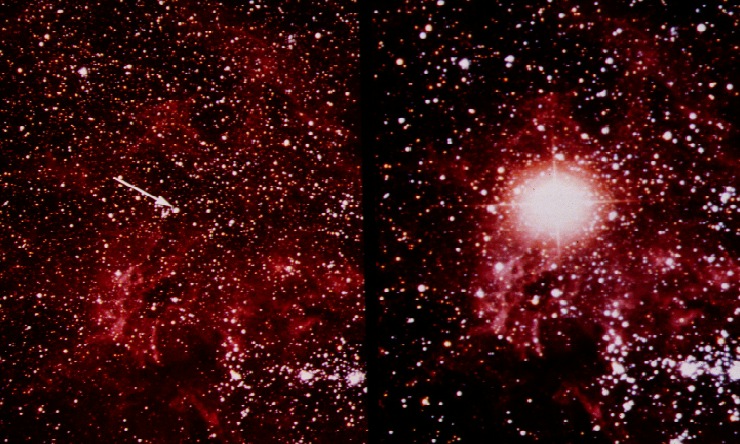 This image shows the progenitor star in the Large Magellenic Cloud (arrow, left) that turned into a supernova (right) in 1987. The neutrons from it were detected. They were not faster than light. Source: http://www-personal.umich.edu/~jcv/imb/imbp4.html

Sixty nanoseconds is sixty billionths of a second; a tiny measurement error might account for the observed discrepancy. Furthermore, observers in 1987 saw the light from a supernova and the neutrinos from that supernova arrive at the same time – over a distance not of a few hundred kilometers but of hundreds of thousands of light years. Those (much lower energy) neutrinos, at least, were traveling merely at light speed.

But the scientists reporting this result have gone to great lengths to make accurate measurements, using same standard techniques to synchronize clocks and distances that everyone has depended on for decades. If their measurements are in error, then many other experiments will have to be looked at anew.

I already ran a photo of me at CERN, so here's one of me at FermiLab, thanks to Bill Higgins who works there and gave me a tour...

The next step is to try the experiment under different conditions, different lengths, different energies. Fermilab, near Chicago, is gearing up to do just that. Intriguingly, earlier work at Fermilab had actually also seen neutrinos arriving too soon; but their measurements had not been as precise as those at CERN, and they just assumed the difference was due to some unknown error. Meanwhile, the CERN group this past week announced a new version of their experiment, with the same result.

But even the CERN group recognizes that there could be some subtle error in what they’re doing. Their paper concludes: “despite ... the robustness of the analysis, the potentially great impact of the result motivates the continuation of our studies in order to investigate possible still unknown systematic effects that could explain the observed anomaly.”

It’s either a remarkable breakthrough, or a mistake. Being able to tell the two apart is never easy. By publishing their results, with all the details of how they did the experiment, the CERN team is inviting the rest of the scientific community to help them out. They’re honest enough to admit they could be wrong. That’s more than might be said for many of the glib, and incorrect, critiques that appeared in the popular press when their results were first published.

Saint Ignatius, in his Spiritual Exercises, developed a method to help determine if a spiritual urge was really an urge from God; it’s easy to misread such things. Scientific data can be just as tricky to interpret. Progress, be it in the worlds of science or spirituality, by definition means crossing into new, unknown territory. We need help from a community of people who understand what we’re trying to do, to find our way to the truth.

[It was, no surprise, a mistake. Turns out that some of the equipment was slightly out of adjustment. These things happen. Meanwhile, there is a web site set up to collect neutrino jokes...]