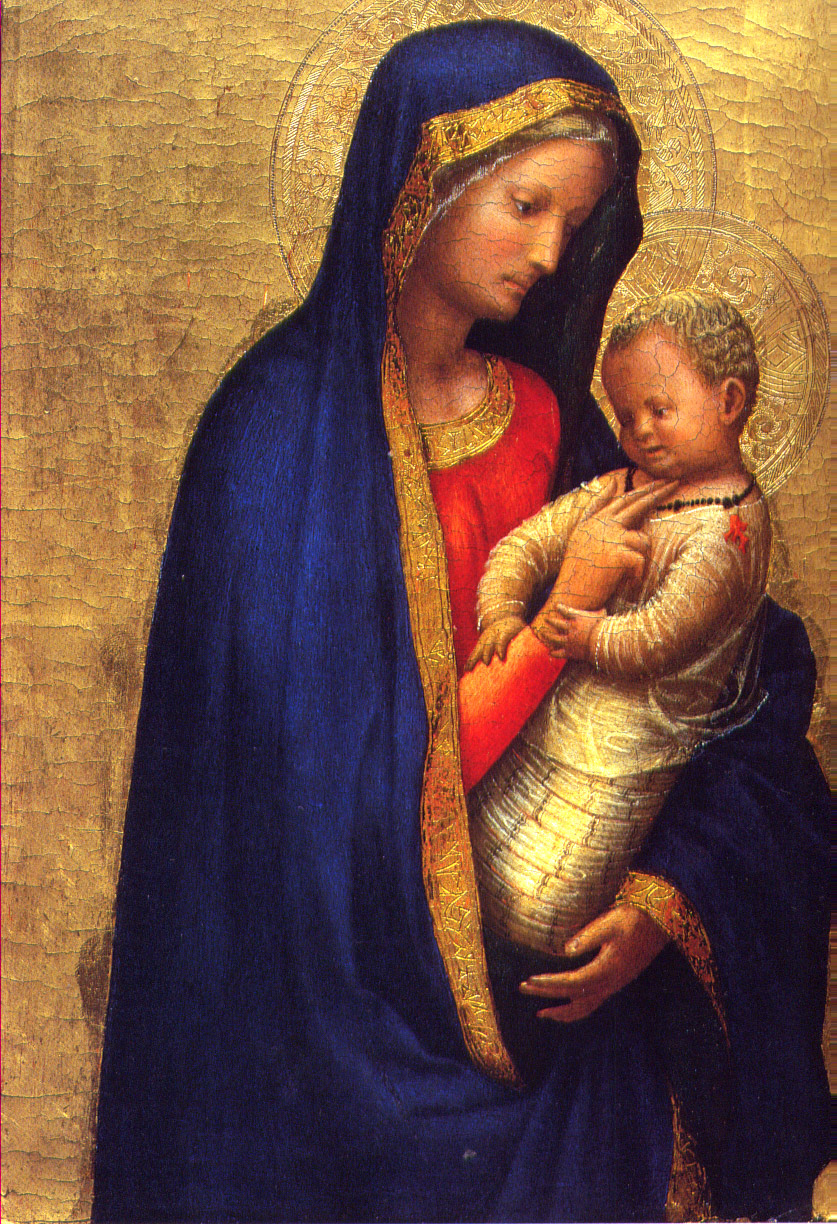 Madonna and child (1426) by Masaccio, the first great Italian painter of the 15th century Italian Renaissance. (Now in the Uffizi, Florence)

“In the beginning was the Word.” So opens the Gospel according to St. John. When I was young they called this (John’s Chapter 1, verses 1-14) “The Last Gospel.” We heard it repeated so often at the end of every Mass, that the words went past us without registering. When they tried teaching us Greek in High School, this was a favorite passage; it was an easy exercise, using the same few words over and over, ringing changes on their position and grammar. But of course the underlying philosophy is anything but easy.

Word as used here is our weak English translation for the Greek logos. Logos carries a great weight of philosophical meaning, from “rational discourse” to the fundamental order of the universe. It is the word from which we get logic.

This is our foundation, of course, for science. Logic and reason were with God from the beginning. God is He who built the universe on them. Indeed, the first verse concludes, “and the Logos was God.” That is one more reason why the so-called “war” between science and religion is so bogus. How could God be at war with Himself?

In Florence this past month [2008], I participated at a conference of documentary filmmakers on yet another panel about this putative war between faith and science. The organizer, a British filmmaker, challenged me about my view of miracles. How could they exist? Are they not contrary to Science? Her assumption appears to be that it is “scientific” to deny the evidence of anything that doesn’t fit into one’s preconceptions. And so, sadly, she has cut herself off from any possibility of experiencing a miracle.

Of course, without science we would never be able to recognize a miracle. Without understanding what is ordinary, we could not appreciate the extraordinary. But on the other hand, the very existence of the Universe (not to mention our own ability to be aware of it) is a miracle so commonplace that, like the Last Gospel, it rarely registers in our minds.

The most startling miracle of all is the Nativity we celebrate this season. While in Florence, visiting its museums I was struck by the sheer number of Nativity scenes hanging on the walls. Every artist of the middle ages appears to have had his own take on the subject. Each saw a different aspect to emphasize, from the majesty of the Infant before of the Magi, to the intimacy of Mary tickling the baby Jesus under the chin.

The Nativity is the core, and the uniqueness, of Christianity. Greek philosophy might eventually have led us to a rational view of the universe, even to a worship of Reason. The wisdom of India and China was able to form a systematic basis for ethics and the proper behavior of the human being within society. But only the Gospel – John’s Gospel – tells us that Reason Itself became Flesh, and dwelt among us.

The laws of universe became, at that moment, the baby in that manger.

How can the “laws of science” become a human being? It’s a bizarre yet somehow exciting insight to me. But even the most hardened rationalist, if they have experienced love, will understand and accept how God (for which read love) and science (for which read human biology) come together in a baby.

It makes fresh the meaning of the Nativity: love, consolation, hope – God – Incarnate. It also makes me understand why the Magi fell in worship.

But at the same time, I think of that other image, Mary tickling the Infant. What does it mean to play with the laws of nature? It means gazing in admiration at the sky. It means teasing out the secrets of the physical universe. It means having fun with high tech. Think of that Madonna and Child, when you find those electronic toys under your tree this Christmas.