This column first ran in The Tablet in March 2010, and again here in 2015. We're swapping February and March posts this year since most of the February posts from years past were about Lent, which doesn't start this year until March. 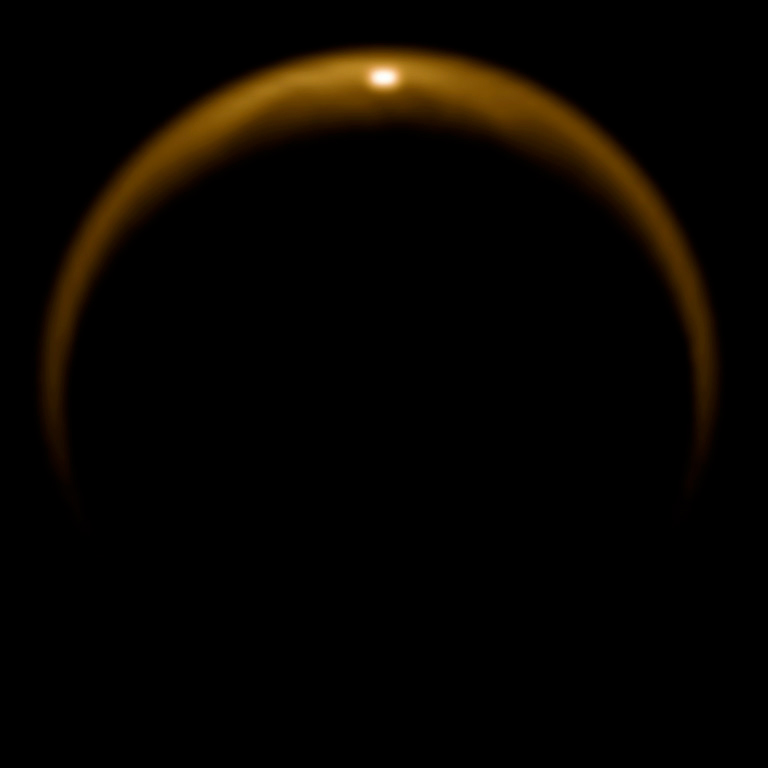 Jingpo Lacus, observed in infrared light by the Cassini probe on July 8, 2009. Note the spot of light, caused by sunlight glancing off the surface of the Lacus.

The International Astronomical Union’s committee on planetary surfaces nomenclature (on which I serve as their resident “Latin expert” which no doubt would shock my high school Latin teachers) has voted [in 2010] to give a smooth surface feature on Saturn’s moon Titan the name “Jingpo Lacus”, after Jingpo Lake in China.

From the way they reflect radar waves, regions like these on Titan’s surface appear to be very, very smooth. Our best guess is that they’re pools of liquid hydrocarbons, something like lakes of liquid natural gas. Titan’s atmosphere, about twice that of Earth’s, has methane clouds and apparently conditions that allow for this methane to rain out and pool on the surface, much like water does on Earth. The surface temperature of Titan itself is hundreds of degrees below zero, so ordinary water there is frozen harder than rock.

The rule is that we use the names of lakes on Earth as names for these flat features on Titan. (Three much larger features there are deemed maria, seas, and named for sea monsters.) The largest such “lake” on Titan is Ontario, named after one of my beloved Great Lakes. Alas, Titan as of yet has no Windermere or Coniston or Ness.

There’s a reason why the name Jingpo was chosen for this small pool. The previous summer, the team running the infrared camera on the Cassini space probe (which also has the radar mapper used to discover these lakes) noticed a sharp spot of bright light reflected off the surface of Titan right at this location when the spacecraft was lined up opposite it from the Sun. They were seeing sunlight glinting off its surface, so bright that they calculate the surface of the lake must be smooth to within a few millimeters. The Chinese “Jingpo” translates into English as “Mirror”.

Naming something, whether it’s a pet hamster or a new piece of geography, implies a kind of ownership, or at least responsibility. Adam’s naming of the animals in Genesis symbolized the stewardship assigned by God to humankind to care for our planet. And if we someday encounter creatures on some other planet, it’s been proposed that one test for their “intelligence” would be to find out if they have given themselves names.

But this name, Jingpo, and indeed the glint itself, also makes the feature on Titan seem somehow more real. Rather than just pondering abstractly about specular reflection and Fresnel coefficients, now I can envision myself standing on a shore, as I once stood at my boyhood home by the side of Lake Huron, seeing sunlight dance off its waters.

On the other hand, from their smoothness it appears that these pools are not stirred by any Titan winds. And since all we can see is their surfaces, we can’t tell if they are unfathomable oceans or only shallow (if large) mud puddles. For all we know, they could be less than a centimeter deep.

It is worth remembering that what we do know about these features is merely the sum of all the things we don’t know. It is the nature of a mirror that it only reveals to us the thing it reflects; it adds nothing, and thus tells us nothing about itself. Indeed, by projecting onto Titan our names (and expectations) of terrestrial lakes we reveal our desire to see mirrored in Titan another Earth.

Mirrored light tells us very little about the mirror. A stained glass window seen from the outside on a sunny day is pretty dull; it is only when we’re inside the church that we can see the colors it brings out of the sunlight, and thus read its message. Even if we see but through a glass, darkly, at least then we can learn something about that glass.