First published in The Tablet in February, 2007; we first ran it here in 2016. I've moved it to March, this year, to fit the Lenten season.

With my colleague Dan Britt from the University of Central Florida, for several years I’ve been measuring the densities and porosities of meteorites. The densities of different meteorite classes can be compared with their parent asteroids, to see how loosely packed they are; and the porosity of these rocks is an indication of how thoroughly their fabric has been cracked by the shock of the impacts that shattered those parent bodies.

We started with the collection I curate at the Vatican; but there are many meteorite types that are underrepresented there. When I came to New York [in 2007] for a year’s sabbatical at Fordham University, I had hoped to extend our data by looking at the nearby American Museum of Natural History’s extensive collection. 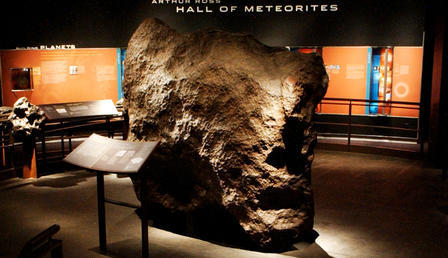 The American Museum of Natural History has a fabulous collection of meteorites. For a year while I was in New York City, I got to walk past these... on the way to the lab, behind closed doors, with many more, and much smaller, samples!

But things got off to a slow start. It took time to settle into Fordham; and Dan, who’d been storing our equipment in Florida, had new responsibilities too. Finally, in December, the equipment was shipped to New York. It arrived just in time for Christmas… and the holidays. Then I spent another week at my Jesuit province congregation. Finally, in mid-January, Dan himself came up to New York bringing the few last bits needed to get to work.

The key instrument we use is an Ultrachrome Pycnometer. It measures meteorite volumes on the same principle that had sent Archimedes running down the streets of Syracuse, naked from his bath, shouting “Eureka.” He’d realized that you could measure volumes by dipping a body into a pool of water and seeing how much water is spilled out of the pool. We don’t want to dip our fragile meteorites into water, however. We use inert helium gas.

Helium, the gas with the tiniest molecules, will penetrate into the finest cracks and pores of the meteorite; this is good. It will also leak through the tiniest cracks in an experimental set-up; not so good. We could hear hissing from somewhere. Finally, pulling the pycnometer apart, we found a broken tube. Time to order a replacement from the manufacturer. Another month lost.

The next week, Dan returned to New York with the tube, and fixed that leak. But all that’s accomplished is to show up smaller leaks we hadn’t noticed before. The regulator that controls the pressure from the helium tank to the pycnometer is clearly not helium-tight; time to replace it. The outlet fitting is a quarter-inch, while the connecting pipe fitting is metric; another fix needed. Each patch we apply only reveals another leak further down the line. We’ve lost a quarter of our helium so far, without getting a single measurement. And I had less than three months left in New York.

These frustrations only remind me of my own spiritual state, this Lenten season. I’m not a terrible sinner; really, only one or two things need patching, right? But the only evidence I have that I’m making progress in my prayer life is my ability to constantly find faults that I hadn’t noticed before.

I know I will never eliminate all the leaks in my helium plumbing. My only hope is to get to a point where it’s good enough, where I can actually get something accomplished, some data collected, some good done in this world. With the grace of God, maybe I’ll get to that point by Easter.