This column first ran in The Tablet in January 2018

“What do you see when you look at the stars? Science, heaven, God?” the Italian Catholic newspaper Avvenire asked me in 2018. Does the sky look any different to a professional astronomer who is also a person of faith?

This sky image was taken by Claudio Costa from the balcony outside our telescope dome in the Papal Villas of Castel Gandolfo, Dec. 15, 2018.

The first thing I see when I look up at night is the beauty of the stars… just like anyone who can see the night sky.

But I do see more. My father, a US Army Air Corps navigator who once guided a wing of American bombers across the Atlantic to England in 1942, taught me the brighter navigation stars when I was a child. I’d also been given a wonderful book by the children’s writer H. A. Rey (better known for Curious George) that taught the constellations by turning the stars into connect-the-dot puzzles. Even today, whenever I see the stars I immediately start to identify old friends by name. 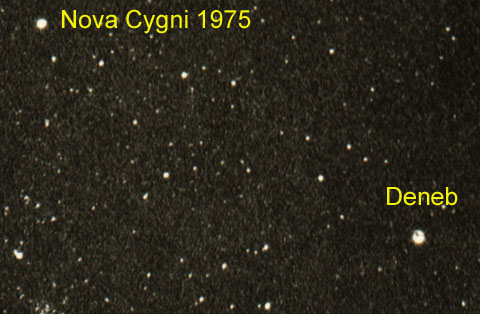 From the website: The picture... shows the most spectacular nova of the past half century, Nova Cygni 1975 in the constellation of the Swan (Cygnus). Discovered on 29 August 1975, it reached magnitude 1.8 a few days later, and remained visible during the first week of September. The picture is taken on August 30, 1975 at 20:39 GMT, with a Mamiya SLR and 50 mm lens. Exposure time was 30 seconds on Kodak Tri-X. The picture shows that the nova was almost as bright as Deneb (α Cyg), a first magnitude star.

I remember once during my grad school days when my fellow student Bob Howell (now an astronomy professor in Wyoming) rushed into our apartment all excited because he had seen a bright star next to Deneb that should not have been there. “I nearly fell off my bike!” I rushed out to see what is now known as Nova Cygni 1975, the brightest nova of the past 75 years. (Novas occur when evolving stars flare up for a few days.) I didn’t have to ask why he was looking up at the sky while riding his bike at night on Tucson city streets. I did that, too!

Looking deeper into the sky, I also think about the science behind what I see. Unusual events, like that nova, immediately connect up with what we are learning about how stars behave. But even more ordinary sights, such as stars with colors like Betelgeuse, or small clusters of stars like the Pleiades, also make me think of the science we learn from studying star colors and star clusters. This adds an extra depth of richness from knowing what I am looking at… to be able to identify that dot of light, with the science I’m sweating over back in my office.

It’s only then that I fully grasp the glory of God in the heavens. Not only did He make the stars; He made us so that we could see them. Even more, He made them, and us, in such a way that we could even understand them. In doing so, He invited us to share in the joy and love that He revealed in His creation… as St. Paul says in the first chapter of the Letter to the Romans.

Sadly, there is one other thing I see when I look at the night sky nowadays: how many stars have been hidden from our sight by all those ugly and useless city lights. (Lights directed downward onto streets are one thing; but who drives in the sky?) As Pope Benedict once pointed out in a Holy Saturday homily, light pollution is a perfect analogy for how we try to blot out God and His glory by filling up our lives with our own absurd efforts.

Of course, I am not the only person to look into the sky and see more things there than the casual observer might notice. Two thousand years ago, certain wise men from the east were guided by the stars to the incarnation of the One who made those stars… even as Herod and his henchmen tried to blot out the innocents, those fainter stars of Bethlehem surrounding the One who had come to help us all navigate our lives.