Originally published in The Tablet in March, 2006, and republished here in 2015. This version is slightly edited.

The 2006 Lunar and Planetary Science Conference, held outside the Johnson Space Center in Houston, was unusually rich. We saw fiery dust from an ice-rich comet; startling images from Mars; a new type of lunar rock… and that was just on Monday morning. By Friday afternoon, I was exhausted. 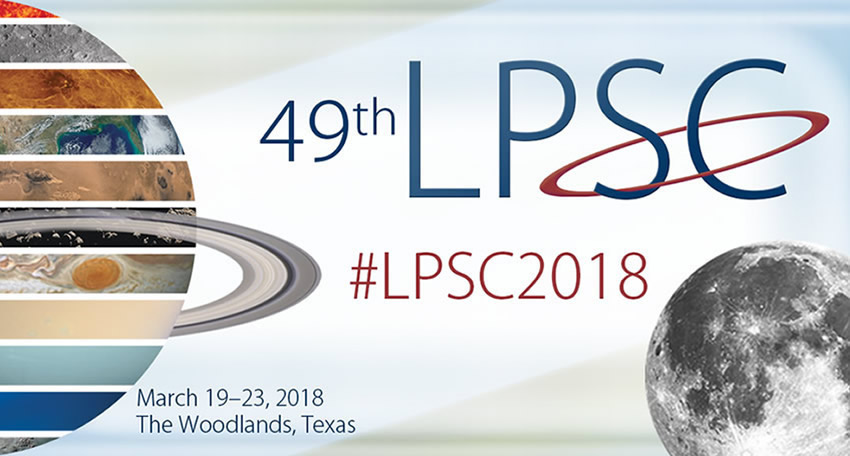 The poster for this year's Lunar and Planetary Sciences Conference

I had already heard the Stardust results (see Across the Universe) at the Sunday welcome cocktail party when one of the mission scientists whispered to me, “We’ve found CAIs!” (Another friend on the team described Stardust Principle Scientist Don Brownlee’s first comment when they finally got the samples: “I can’t believe it actually worked!”)

These high-temperature grains of Calcium and Aluminum oxides that appear as Inclusions in certain meteorites are thought to represent the first solid materials to crystallize out from the hot gases that made the sun and planets. How did they wind up wrapped in comet ices, stored in the farthest reaches of our solar system? In fact, a controversial theory of the early Sun had predicted a powerful wind of plasma and magnetic fields that could have blown just such crystals outward, in streams above and below the disk of the planets. Suddenly this theory doesn’t look so unlikely.

On Wednesday, the team of the Cassini spacecraft mission to Saturn showed their images of its moon Enceladus spewing geysers of liquid water out of its south pole. Does this water represent a global ocean under the Enceladus crust? Should we be looking there for signs of life?

That afternoon, the Deep Impact team had their turn. Recall (Across the Universe) that the previous July they’d flung a copper canister at nearly 40,000 km/hr into the nucleus of Comet Tempel 1. Their high speed movie showed a “puff” of superheated rock droplets at the instant of impact, followed by a cloud of dust and ice. Spectrometers on board recorded the chemical composition of the cloud; and watching it fall back to the comet let them measure the comet’s weak gravity. It is so low that the comet nucleus must be quite fluffy, more than half empty space.

Friday morning, the Japanese Hayabusa mission (Across the Universe) presented their results. Their target asteroid, Itokawa, also appears to be a rubble pile, 40% empty space, covered with boulders and gravel. Their lander picked up samples, but trouble with the spacecraft means they may not get them back to Earth until 2010, three years later than planned.

Perhaps giddy with these delightful results, several scientists presented some more adventurous speculations. Jonathan Lunine (then at University of Arizona, now at Cornell), in a special prize lecture, suggested that we should send blimps to Titan (Across the Universe) to cruise its atmosphere, with occasional forays to the surface to look for life in its methane lakes.

Not all was sunshine and fun. At a sober session Monday evening, the scientists heard the bad news that NASA is cutting their science budget by 15%, with Astrobiology (Across the Universe) chopped in half. Cost overruns with NASA’s shuttle, and the general dire state of the US budget, are to blame.

Indeed, the week before the meeting I had visited New Orleans, a city whose devastation was indescribable. There are no shortages of places that need our resources, both financial and human. But for one week, a thousand planetary scientists remembered that this universe of storms and human tragedy is also a place of surprise and delight; that the joy of discovery can give us the strength to face tragedy. It is evidence of God’s presence across the Universe.

[More than ten years later, our science has advanced but many things remain the same. New Orleans has recovered from its hurricane; Puerto Rico has not. Brett Gladmann is still saying witty things about asteroids. The NASA budget is, as ever, under attack. And the Lunar and Planetary Science meetings continue to be held every year in Houston though it is no longer held on the site of the Johnson Space Center. I went to my first one in 1976; it's been a while since I have had the chance to get back, lately, alas.]