Under the dim light of a distant sun, a cold white ball smaller than our Moon orbits a huge gas planet, garishly striped with colored clouds. Galileo first saw this jovian moon – to be named “Europa” by his rival, Simon Marius – on January 7, 1610.

In 1805, Laplace had worked out Europa’s mass (using an elaborate theory of the moons’ orbits), and other 19th century astronomers timed the way the Jupiter moons shadowed each other to estimate their sizes. By the end of that century clever instruments allowed Pickering to estimate its brightness.

All the information was there. From these data, any schoolchild could have calculated that Europa was less dense than rock, more dense than ice, and brilliantly white. But no one actually put all that information together until 1908, when Pickering finally noted the low density and bright surface... and speculated that this Jupiter moon was a ball of white sand!

The first published description of it as an icy body came in the 1923. Jeffreys was arguing that the giant planets Jupiter and Saturn must be rich in ice, and noted in passing that this was supported by the obvious icy nature of their moons. Obvious; but no one had ever actually said so before.

That’s where Europan science stood in the mid 1970s, when I wrote a student thesis using a computer model to predict the evolution of these icy moons. The density suggested a mixture of rock and ice (indeed, for Europa, more rock than ice); rock contains radioactive elements that give of a tiny amount of heat as they decay, enough to melt the ice. Following the suggestion of my thesis advisor, my models showed that Europa should have a large rocky core, a thin icy crust, and a liquid ocean between the two. An ocean rich in dissolved minerals… and maybe…

I was not the first person to predict life in the oceans of an icy moon; I was the first NOT to predict it! (Last page of my Master's thesis at MIT, 1975)

My real passion then was not science, but science fiction. I imagined a world where intelligent tuna swam between a rocky floor and an icy ceiling, never knowing that there was a whole universe of planets and galaxies over their heads… until the day a colliding asteroid poked a hole through the crust and sent my dolphin hero flying out to discover: it was full of stars!

(And what opaque ceilings hide most of the universe from us?)

Indeed, similar moons (as yet undiscovered) around the giant planets already detected orbiting hundreds of nearby stars may have similar environments, similar havens for life.

A few years after my thesis was published, the first NASA spacecraft flew past Europa. Snapshots taken then, and during subsequent fast flybys, have shown that that surface of Europa is covered with fractured ice like the sheets over the arctic oceans, and Europa  deflects Jupiter’s magnetic field the way you’d expect if it contained a salty, electrically conducting ocean. My thesis wasn’t completely crazy. 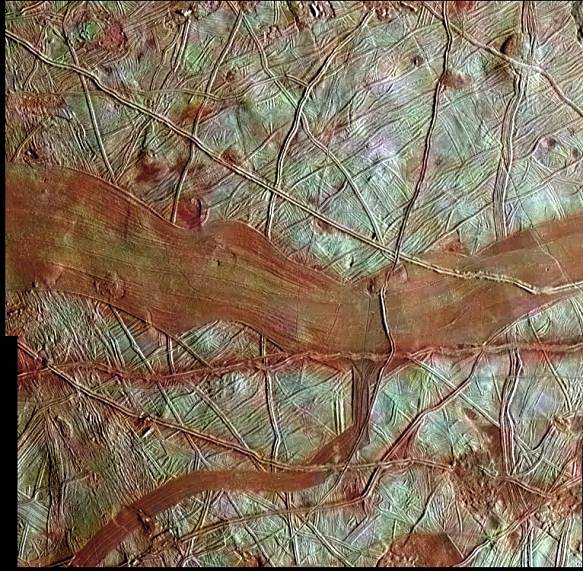 This colorized image of Jupiter's moon Europa is a product of clear-filter grayscale data from one orbit of NASA's Galileo spacecraft, combined with lower-resolution color data taken on a different orbit. (credit NASA Europa Clipper page)

But is there life inside Europa? As of yet, we don’t even know for sure if the ocean is really there, or how thick the crust is between it (should it exist) and the surface. [Actually, the interaction of Europa with Jupiter's magnetic field is pretty strong evidence that there is salty liquid water below its crust. And some evidence of water appearing intermittently above Europa was also found in 2013. But we haven't seen the kinds of plumes that have been spotted over the surface of Enceladus.] We don’t know enough about Europa to know how to go about looking for life.

Will my dream be confirmed? The proposed mission won’t launch until 2020, and won’t orbit Europa until 2028... more than 50 years after I wrote my thesis. Should I still be around, I’ll be 75 years old by then. Any follow up mission to drill through the crust and look for my dolphins, probably won’t happen before I reach 100. Meanwhile, I’ll just have to dream.

Where we are in 2019: The, ESA JUpiter ICy moons Explorer (JUICE) mission announced in 2009 is now set for a 2022 launch for a 2030 arrival; as of the end of 2018 they were testing the engineering model. NASA is still on board with a particles and field experiment and the radar that they hope will peek below the surface. The NASA Europa Clipper mission will be launched later in the 2020's...