This column from The Tablet was first run in December 2018

December 2018 was a busy month in space. The Japanese Hayabusa II mission was orbiting Ryuku, a tiny near-Earth asteroid. A Chinese probe was about to place a lander on the far side of the Moon. NASA's Insight mission had just arrived on Mars to measure marsquakes and the heat flowing from its interior. Virgin Galactic was testing a ship that can take tourists above the stratosphere. 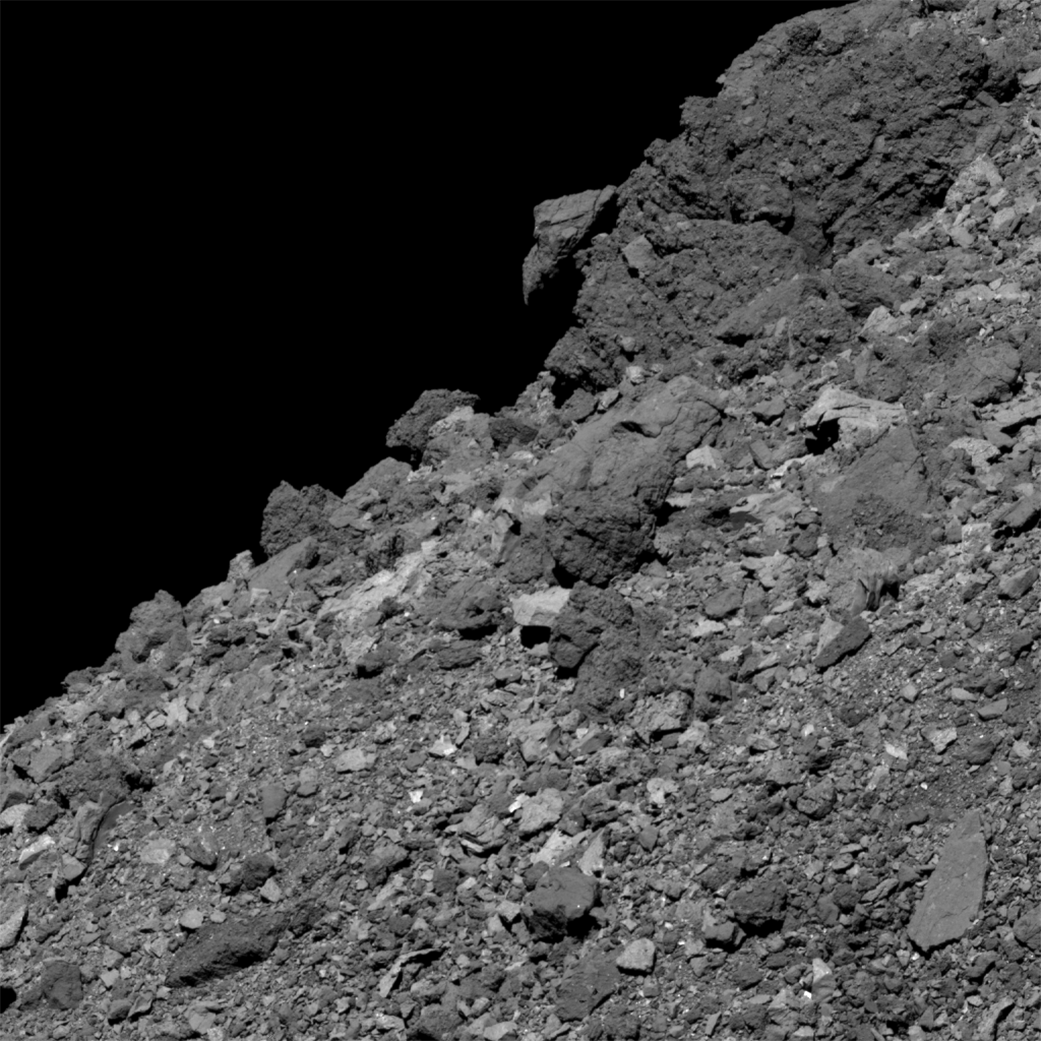 This image shows asteroid Bennu’s boulder-covered surface. It was taken by the PolyCam camera on NASA’s OSIRIS-REx spacecraft on April 11, 2019, from a distance of 2.8 miles (4.5 km). The field of view is 211 ft (64.4 m), and the large boulder in the upper right corner of the image is 50 ft (15.4 m) tall. When the image was taken, the spacecraft was over the southern hemisphere, pointing PolyCam far north and to the west. Credits: NASA/Goddard/University of Arizona

Of all these, my attention was on OSIRIS-REx. (The name is a typical NASA acronym; don’t ask.) This probe had also just arrived at a near-Earth asteroid, named Bennu, with essentially the same mission as Hayabusa II. It was the dream of the late Mike Drake, my first PhD advisor at the University of Arizona; after his death, the science team lead fell to Dante Lauretta, whose PhD director was my MIT classmate Bruce Fegley. And the rest of the science team are also friends of mine.

The holy grail of asteroid science for a long time has been to find asteroids with the same composition as those rare but important meteorites rich in water and carbon. Though science fiction stories talk about mining rare minerals from the asteroids, in fact water and rocket fuel would be what’s most in demand in the near future. Rather than spending fuel to lift more fuel off the Earth to power spacecraft onwards to the planets, it would be much cheaper to make the fuel locally out of materials that are already up there.

But how can we know which asteroids have water? And how can we be certain that the material in the asteroid is really the same as the meteorites in our lab? There are many black meteorites in our collections, but only a few of them have the water we’re looking for. Going to a black asteroid is not enough, then; it has to be the right kind of “black.” And even if the color is right we can’t be sure it’s really the stuff we’re looking for. Like ordering a Christmas present on-line, we can’t tell for sure if the picture in the catalog actually matches what we thought we were getting until the package arrives home. Hence, Hayabusa II and OSIRIS-REx chose to test slightly different kinds of dark asteroids; and they both plan to return samples to Earth.

Notice how this science works. We have an idea of what we think we are going to find – we wouldn’t know what to look for otherwise. But whether it is a distant dark asteroid, the inside of Mars, or the far side of the Moon, we won’t really know what’s there until we go there. And nothing beats having a real sample in hand; or, like the space tourists know, being there yourself.

Every culture in history has thought they knew what the gods would be like. Even the ancient Israelites thought they had a clear picture of their God. But only in the Incarnation could we learn first hand, face to face, who this God really was. As it happens, a carpenter’s child in a manger was not what they were expecting; nor was a message of love and forgiveness always welcome to an oppressed people looking for revenge. As with our science samples, we always have to be prepared to be surprised. Sometimes surprises make the best Christmas presents.

And surely God knew what it’s like to be human. But it’s good for us to know that, having been here, He knows first hand.

[All the missions mentioned above have had roaring successes; as of this writing, Hayabusa II has picked up its samples and is en route back to Earth.]