And then I wrote… the year 2011 found me invited to contribute to a then-new feature of the website Tor.com, affiliated with the science fiction publisher Tor Books. (It helps to have friends in the field; editors at Tor, Patrick and Teresa Nielsen Hayden, have already gotten their picture in one of my posts, from the time they visited me in Castel Gandolfo.) 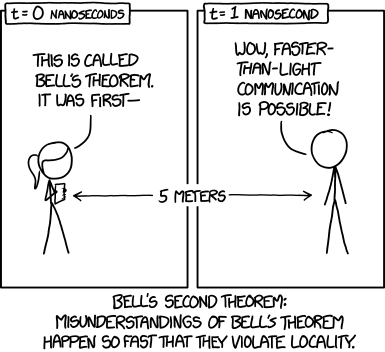 The web comic xkcd had a great strip about FTL neutrinos, but searching for it I came across this one, which tickled me even more...

As it happens, I only wound up writing three posts for them before the press of other items got in the way. If you dig really hard you might still be able to find the posts there, but what the heck, here’s the first of them. In fact… this one was actually written by sometime Sacred Space author Bill Higgins, who let me tag on a few words and add my name to the author list. To be honest, I have no idea what, if anything, I contributed.

[And I swiped the opening joke from our friend Neil Rest; it’s all over the internet now so who knows who came up with it first!]

“We don’t serve faster-than-light particles here,” growled the bartender. A neutrino walks into a bar.

Last week [this blog post originally ran on October 4, 2011], scientists at the CNGS experiment (CERNS Neutrinos to Gran Sasso) reported the arrival in a lab in Gran Sasso, Italy, of neutrinos produced at the accelerator in CERN, on the Swiss-France border, at a rate that implied they were moving slightly faster than the speed of light. Soon, jokes (like the above) based on this possible violation of causality, with particles moving backwards in time, were the rage during coffee breaks in physics departments around the world.

Behind the science is an interesting social issue, however… how much can you believe of you read in the papers about science? Do news reports of major breakthroughs get it right?

The role of scientist as newsmaker has a long history, but perhaps a key moment occurred in 1919, when...